ODENTON, MD -- Christian Cupani, a defenseman for Team Maryland, has committed to Nazareth College for the fall of 2021.

The 2000-born native of Orangeburgh, NY came to the Eastern Hockey League (EHL) for his final year of junior hockey, and began the season with the Seahawks Hockey Club. The 6'4" blue-liner headed south to Maryland in early February, and overall, he tallied 11 total points throughout the 2020-21 campaign.

"Christian is an outstanding young man," said Maryland head coach and general manager Josh Fusco. "In his short time with us he improved in every aspect of his game and that shows his dedication and attention to detail. We want the best fit for our players and Nazareth is gaining an outstanding addition to their blue line. I couldn't be any happier for Christian and the Naz' hockey program."

Cupani is part of a very strong incoming freshmen class at Nazareth, that includes five other players from around the EHL. When Cupani arrives on campus he will be joined by Joey Schaefer of the Boston Jr. Rangers, Matt Sayles of the Protec Jr Ducks, Jeremy Swartz and Lumberjacks Hockey Club, and Keith Davenport and Ryan Turse of the East Coast Wizards.

"I would like to thank the Team Maryland organization for taking me in so late in the season and giving me a place to call home for the last couple months of my junior hockey career," said Cupani. "I’m very grateful that I was able to play hockey, despite the countless obstacles that the hockey world faced this year. I am extremely excited to play at the next level for Coach Roll at Nazareth College next season, as I have heard a lot of good things about the program. I would also like to thank Coach Fusco for preparing me for the next step in my hockey career. He is a great coach who cares about his players and works endlessly to advance them to college hockey. I wish Team Maryland the best of luck for their future in the EHL." 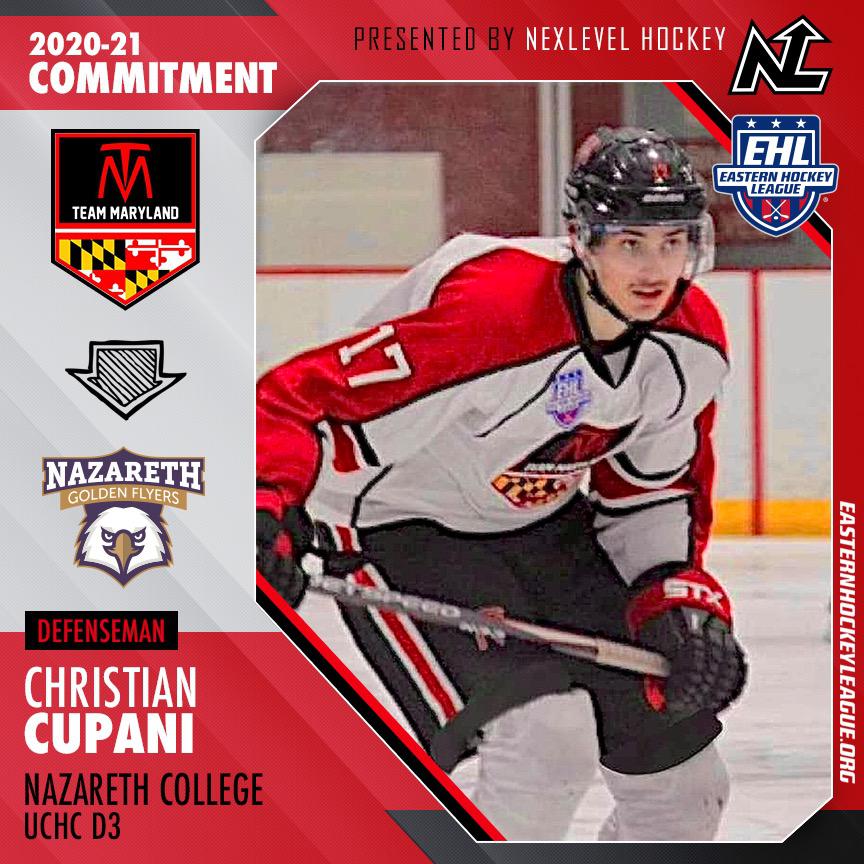