WORCESTER, MA -- John Baker, a forward for the Railers Jr Hockey Club, has committed to Framingham State University (FSU) for the fall of 2021.

The 2000-born native of Newton, MA recently finished his first and only season with the Railers, and in 39 total games in the Eastern Hockey League (EHL), Baker scored 11 goals and dished out 22 assists.

“John brought a lot of personality to the locker room and was a well-liked guy,” said Railers head coach Sean Bertoni. “John has tremendous skill and is an offensive threat. He is a great skater, with tremendous speed and quickness. We are excited for John that he has made the decision to become a student-athlete at Framingham State.”

The FSU Rams have always been heavy recruiters of the EHL, and that consistency remained constant this past season. Baker is part of incoming freshmen class that includes four players from four different teams throughout the league. This fall, Baker will be joined by Ty Carter of the New Jersey 87's, Joseph Donahue of Team Maryland, and Jared Tyson of the Connecticut Chiefs.

Baker is very happy with his decision to play for the Railers this past season, as it ultimately led to this moment and the chance to play college hockey in his home state of Massachusetts.

"I really liked the coach [Mike Bailey] when I went on my visit,” said Baker. “I know a few of the Framingham players The other thing I like is that it is close to my home. Living in Newton, it is a short commute up Route 9 to Framingham. The MASCAC is a very competitive league and I’m very impressed with Coach Bailey’s drive and determination to bring Framingham to the top. Having finally made my decision, I can now start my training to get ready for my college athletic career now that I know where I am going. I am very excited to become a student-athlete at Framingham State University.”

Baker went on talk about what he plans to work on at the next level, and Mike Addesa spoke to the player that Baker became during his time with the Railers.

“There is some stuff that I need to work on, mainly in the defensive end,” added Baker. “Things like getting back into the play. The coaches were on me about improving on that part of my game to help me get ready for college hockey."

“John made consistent progress in his overall game in his year with the Railers,” said Addesa, the General Manager of the Railers. “He is definitely a highly-skilled player. He is an excellent skater with excellent hand skills. He leaves us having gained a great deal in his education of the game with a great potential to become a truly outstanding collegiate hockey player. We are very grateful to Johnny for his contribution to our program. He was a very good teammate. We all wish him the very best moving forward.” 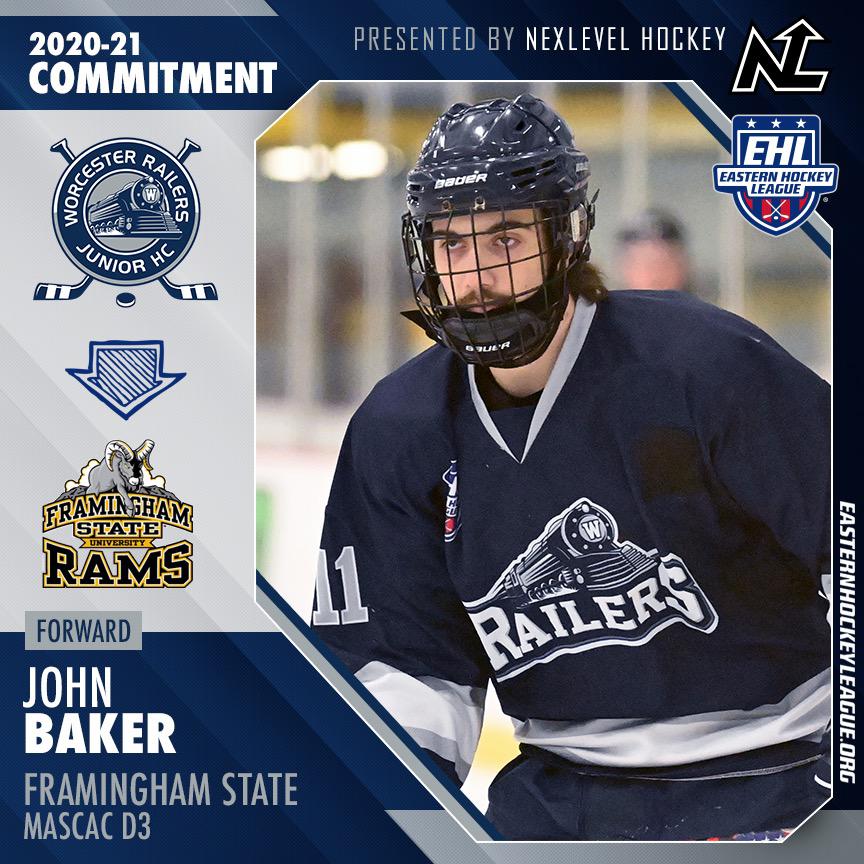