BOSTON, MA -- The Eastern Hockey League (EHL) is pleased to announce an updated Front Office structure following the conclusion of the 2020-21 season. After serving as an Executive Advisor this past season, Joe Bertagna will transition to the full-time role as Commissioner of the EHL. Alongside Bertagna, Neil Ravin has spent the previous six seasons acting as the league's Director of Communications, and will now become the Associate Commissioner of the EHL. 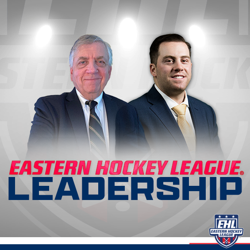 “The EHL’s Board of Governors is excited to announce our updated Front Office structure following the conclusion of the 2020-21 season,” said Mike Sorabella, the Executive Chairman of the EHL. “Joe [Bertagna] and Neil [Ravin] both played an integral role in guiding our league to the finish line this past March. I have great confidence that these two executives will continue to provide great leadership and vision for the foreseeable future in the EHL.”

Prior to joining the EHL in the summer of 2020, Bertagna served as a Commissioner at the NCAA Division I level for 38 years. The nearly four decades of work was divided up by 15 years with ECAC Hockey, followed by 23 years with the Hockey East Association. Also, back in 1991, Bertagna was named the first Executive Director of the American Hockey Coaches Association (AHCA), and maintains that position today. Bertagna's efforts have been recognized with numerous awards, most notably the USA Hockey Distinguished Service Award and Hall of Fame recognition from Massachusetts Hockey, the Eastern College Athletic Conference, the Women’s Beanpot Tournament, and the Massachusetts High School Hockey Coaches Association.

As for Ravin, the 2013 graduate of Quinnipiac University, joined the EHL just prior to the start of the 2015-16 season. Ravin’s main duty is to generate publicity and brand awareness of the EHL in the hockey community through the league website and social media platforms. In five seasons with the EHL, Ravin has helped triple the league’s following across social media, all while also serving as the play-by-play broadcaster for over 50 games during the 2018-19, 2019-20, and 2020-21 seasons. Ravin is also the host of the #EShow Podcast.

Located in the Northeast and Mid-Atlantic regions of the United States, the EHL and its 19 organizations celebrate its 9th season in 2021-22.

Stay tuned for news and updates regarding all of the key dates and locations for this upcoming season.