ODENTON, MD -- Denys Arkhypenko, a forward for Team Maryland, has committed to King's College for the fall of 2021.

The 2000-born native of Ukraine recently finished his 4th and final season in the Eastern Hockey League (EHL). After spending a pair of seasons with the Wilkes-Barre/Scranton Knights (2017-19), Arkhypenko followed his Head Coach as they made the move together down to Maryland, just prior to the start of the 2019-20 season. Overall, Arkhypenko leaves his name at the top of the record books for all-time games played in the EHL with 170.

"I've actually coached Denys for six years and from day one till now it’s incredible to see how far he’s come and this was the ultimate goal from that very first day," said Maryland head coach and general manager Josh Fusco. "He’s loyal, he’s trustworthy, and that’s hard to find; his compete level and his level of care is unmatched. I honestly should be thanking him for what he’s done; his time and dedication to me being his coach, following me to MD, and being a huge part of this growth here for our program. To be able to make an impact on a kid's life and career is important to me and heart-warming. This end result from all the time together, simply put, it’s very special and words don’t say it all. Job well done, and job finished."

Arkhypenko is one of two Maryland players heading off to King's this fall, as he will be joined by Patrick Nowak when he arrives on campus. Also when he gets to school, he will reunite with a group of former teammates that alongside him and Fusco, helped the Knights reach the EHL Frozen Finals back in March of 2019. Looking back on his career as a whole, Arkhypenko feels forever grateful to everyone that helped him reach this moment.

"I cannot possibly put into words how grateful I am for my parents," said Arkhypenko. "The things they have gone through just to give me an opportunity at my goals are unimaginable. I am so thankful to be surrounded by such amazing people on this journey and all the families who have opened their home for me. Thank you to Coach [Josh] Fusco and Coach [Matt] Reid for providing all the necessary tools, the attention to detail to become a hockey player and that truly shows this is an organization and people that care about the development of a player.” 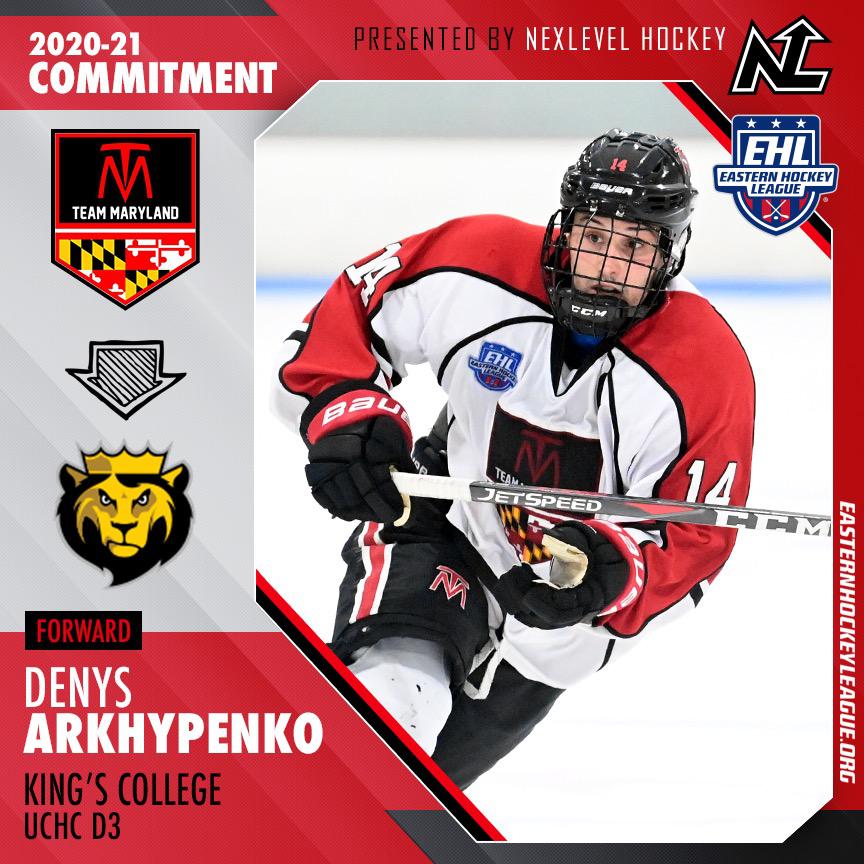