SOMERSET, NJ -- Nick Snyder, a forward for the Protec Jr Ducks, has committed to King's College for the fall of 2021.

The 2000-born native of Clay, NY played three total seasons of junior hockey, two of which took place under the #EShow umbrella.

After spending the 2018-19 season with the Oswego Stampede in the North American Tier III Hockey League (NA3HL), Snyder moved to Massachusetts for the 2019-20 campaign, in which he spent the year developing with the Boston Jr. Rangers at the Eastern Hockey League Premier (EHLP) level.

Snyder then took the next step in the climb up the ladder, as he moved on to the Eastern Hockey League (EHL) this past season (2020-21). After playing out the first seven games with the Philadelphia Little Flyers, Snyder moved over to the Ducks, a transition that ultimately led to this commitment. Overall, Snyder posted 11 points in 39 total EHL games last season.

“Nick was big for us down the stretch; he played in every situation for us in games," said Ducks head coach and general manager Terry Watt. "He was a leader on and off the ice, and he showed up every day and did his job -- whatever it took for the team. Our entire organization wishes him the best of luck moving forward with his collegiate career."

Snyder is one of four EHL players heading off to King's this fall, as he will be joined by a trio of South Division rivals. When Snyder arrives on campus, the class of incoming EHL freshmen will also include Michael Carducci from the New York Apple Core, and Denys Arkhypenko and Patrick Nowak from Team Maryland.

Learn more about the Ducks on the team's official website, and check out the full 2020-21 NCAA commitment list. 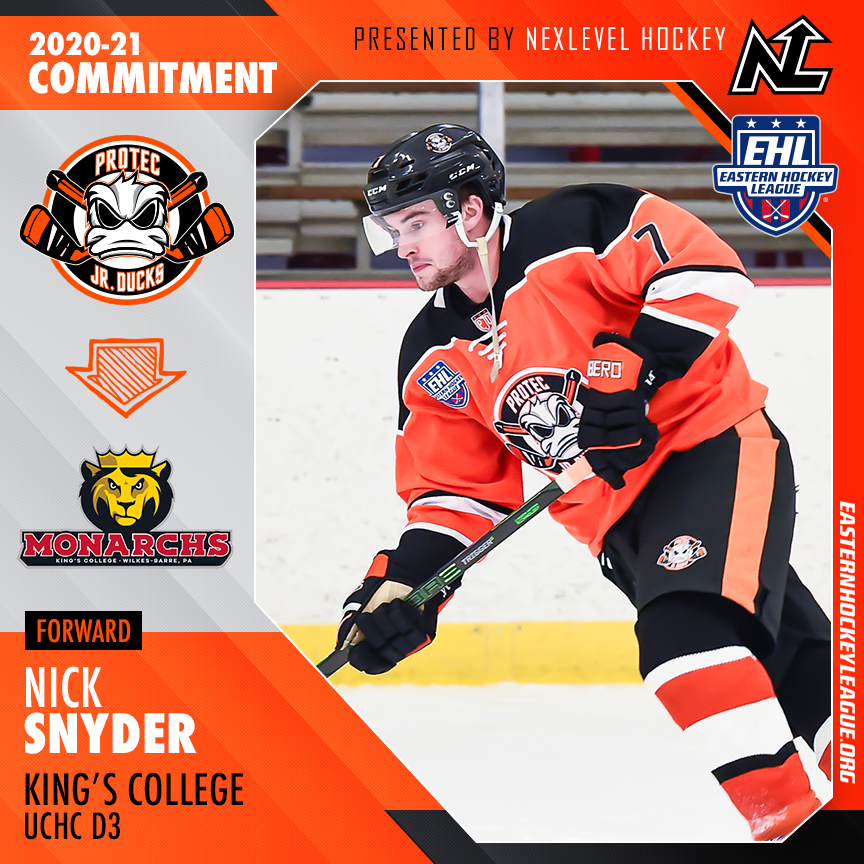