Below you'll find the 3rd set of weekly top performers in the #EShow. The forward and defensemen awards are presented by Verbero Hockey, while the goalie honors come courtesy of Vaughn Custom Sports.

The EHL is pleased to announce that Egan Schmitt (Vermont Lumberjacks), Will White (Protec Jr Ducks), and Jack Boschert (Walpole Express) have been named the Top Performers for Week #3.

Schmitt and the Lumberjacks won two of their three games at the showcase this past weekend, knocking off the Philadelphia Little Flyers and the Connecticut RoughRiders on Thursday and Friday, before falling to the East Coast Wizards on Saturday.

As for the '01 native of Cambridge, NY, Schmitt tallied at least a point in all three games, finishing the weekend with three goals and five assists to his credit. Overall, Schmitt is well on his way to setting new career highs for himself, in his age-out season of junior hockey. Coming up this weekend, the Vermont captain and his teammates have just a single game on the schedule, as they travel to take on the Boston Jr Rangers on Saturday night.

White and the Ducks hit the ice for a pair of games at the Worcester Showcase, beating the New England Wolves by the score of 8-3 on Thursday, and falling to the Walpole Express 5-2 on Saturday. The 6'4" defenseman went off in the game against the Wolves, finishing the contest with a goal and four assists. White's first goal of the season also stood up as the game-winner for his team.

Fast-forward to Saturday, and the '01 native of Scotch Plains, NJ added an assist against Walpole, giving him seven total points in six games to date. Back for his 2nd season with the Ducks, White's seven total points are already more than the four total he notched throughout the entire 2021-22 season.

Capping things off in goal, Boschert and the Express were the only team that was able to pick up three total wins at the showcase. The '02 native of Florissant, MO, was in goal for the trio of victories over the Railers Jr Hockey Club, Ducks, and Seacoast Spartans, turning aside 94 of the 98 total shots he faced throughout the weekend.

For the season, Boschert now owns a mark of 3-1-0, to go along with a 1.40 GAA and a .965 save percentage. The strong weekend sets Walpole up in great position to be recognized highly in the newest set of EHL Power Rankings, which will be announced tomorrow in Episode #92 of the #EShow Podcast.

Looking forward, the schedule also doesn't get any easier for Walpole, as they travel to take on the New Hampshire Avalanche on Friday and the Wolves on Saturday.

The EHLP is pleased to announce that Phillip Parker (Walpole Express), Kurtis Morin (Vermont Lumberjacks), and Xavier Lapierre (Railers Jr Hockey Club) have been named the Top Performers for Week #3.

Following in line with their EHL team, Parker and the Express won all three of their games this past weekend, coming back to beat the Lumberjacks in overtime on Thursday night, followed up by 9-1 and 5-1 victories over the New Jersey Renegades and New Jersey 87s on Saturday.

The '03 native of Medfield, MA set the pace for his team offensively, finishing the weekend with five goals and four assists to his credit.  Parker is off to a great start in his first season of junior hockey, having already notched 11 points in his first five career games. He'll now look to keep the momentum rolling as Walpole takes on the New England Wolves on Saturday, in their final game before next weekend's showcase.

Morin and the Lumberjacks finished with a record of 1-1-2 in their four games this past weekend, racking up four out of a possible eight points in the standings. As for the '02 native of Lyman, ME, Morin finished the weekend with four assists to his credit, his first four points of the year. After notching seven total assists throughout the entire 2020-21 season, Morin will surely surpass that total early on in his 2nd season with Vermont.

Morin and his teammates will be hitting the road with their EHL team this weekend, as they get set for a pair of games of their own against the Boston Jr Rangers.

Lapierre and the Railers are the only undefeated team still remaining in the EHLP, thanks to a perfect 4-0-0 week featuring a win over the New Hampshire Avalanche, a pair of wins over the Seahawks Hockey Club, and victory over the Lumberjacks. It's also worth noting an incredible trend from the four games, as the Railers only surrendered one single goal throughout the week.

As for the '02 native of Canada, Lapierre appeared in three total games, stopping 68 of the 69 total shots that he faced. For the season, Lapierre now owns a record of 3-0-0 to go along with a remarkable 0.71 GAA and a .974 save percentage. 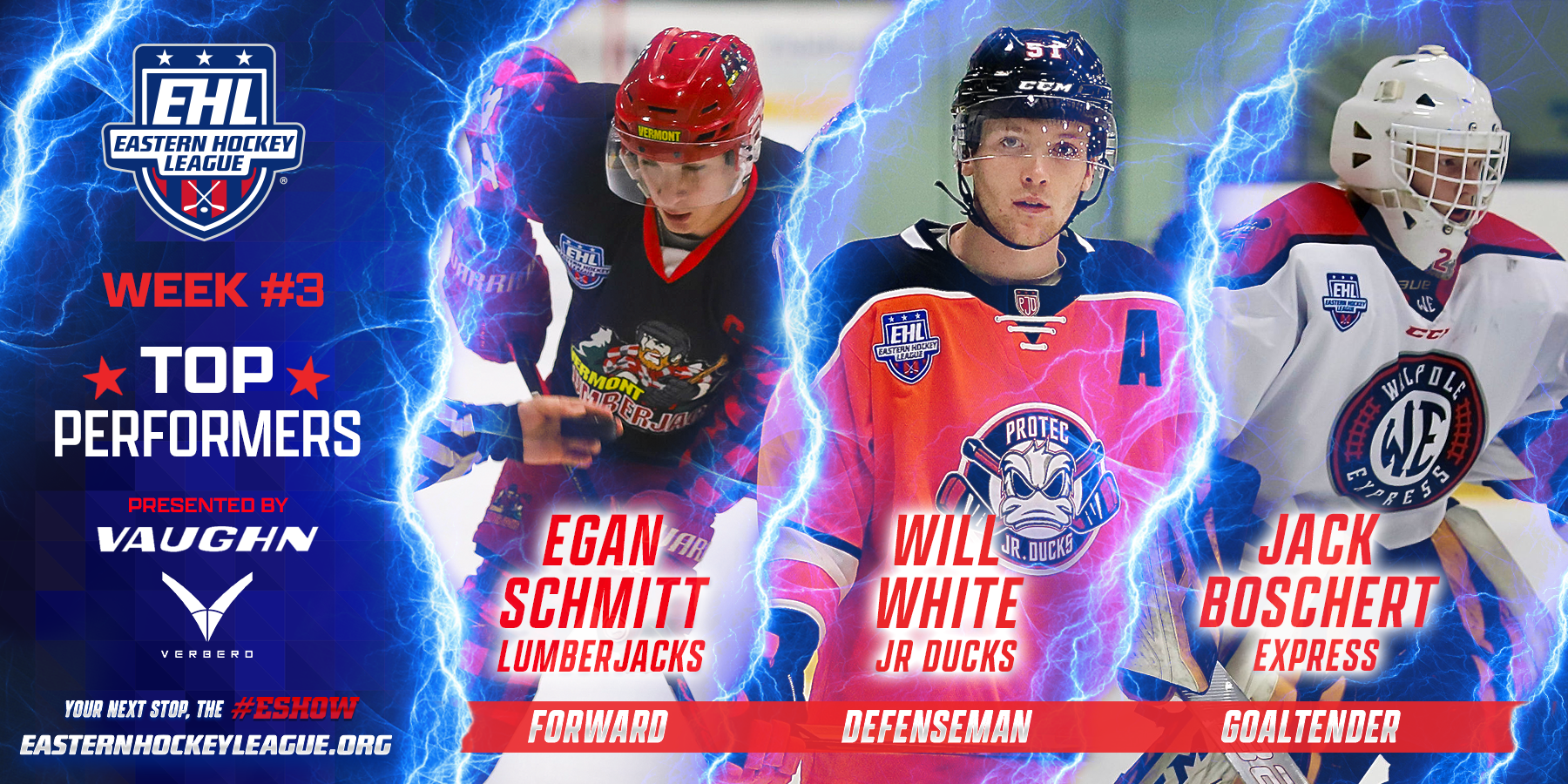 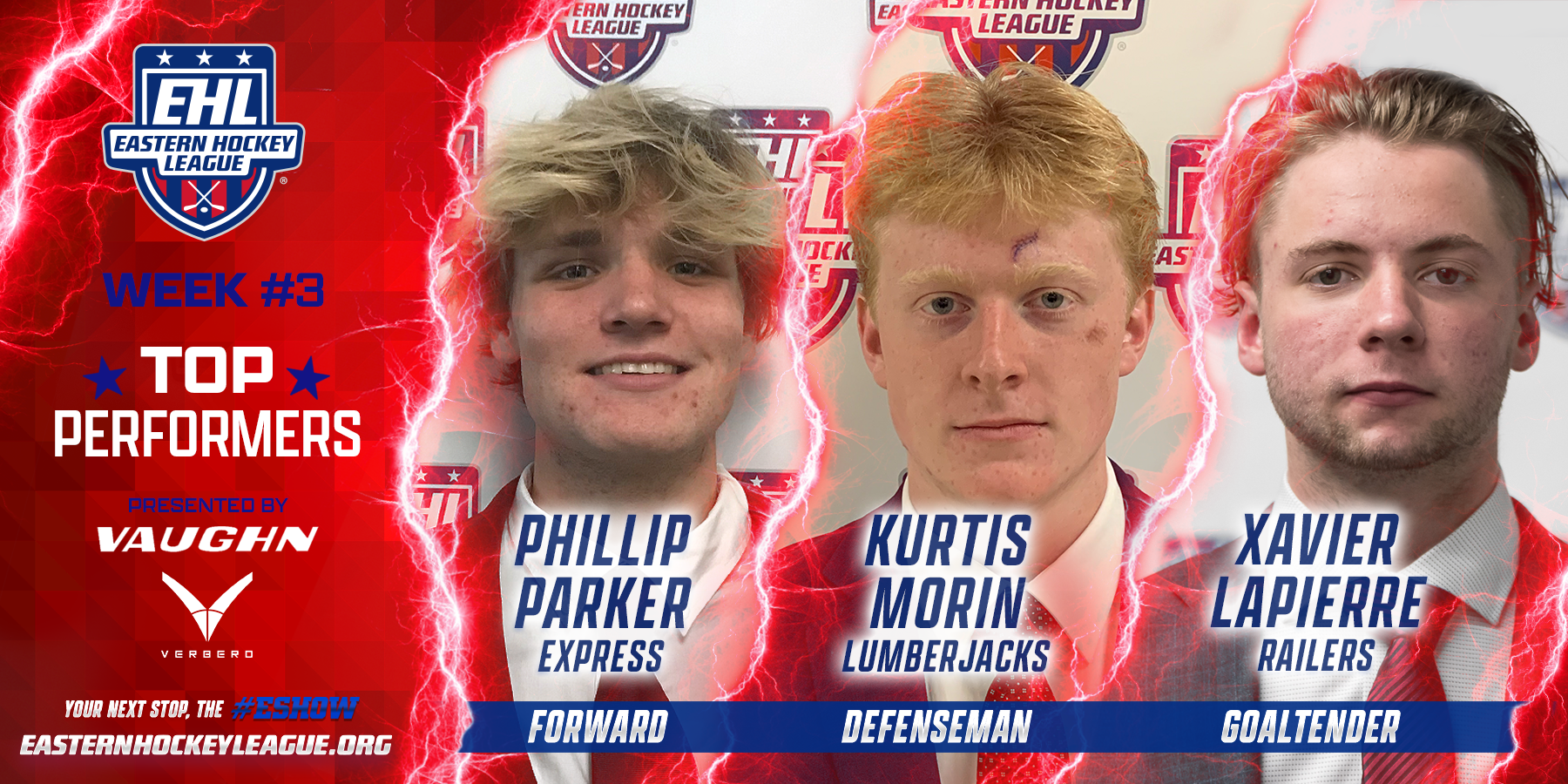