Below you'll find the 6th set of weekly top performers in the #EShow. The forward and defensemen awards are presented by Verbero Hockey, while the goalie honors come courtesy of Vaughn Custom Sports.

EHL STARS OF THE WEEK #6

Schmitt, Birecki, and the Lumberjacks returned from the All-Star Break with a two-game sweep, that came on the heels of a four-game losing streak. The pair of victories over the Seacoast Spartans also provided some much needed revenge for Vermont, as their North Division rivals had previously claimed the first three matchups of the year.

As for Schmitt, the '01 native of Cambridge, NY set the pace in a big way for his team offensively, tallying five total points in the two games. For the season, the Lumberjacks' captain now has 16 points in 11 total games to date, and he's also officially surpassed the 100-point plateau for his regular season career in the EHL. Combined with his postseason numbers, Schmitt has notched 118 total points an even 100 games throughout his junior hockey career.

Moving back to the blue line and Birecki wasn't far behind the pace that Schmitt set, tallying three points of his own in the two games. After being held off the scoresheet since the team's season opener back on September 22nd, the '01 native of Flagstaff, AZ pulled the monkey right off his back with a trio of assists against the Spartans. It's also worth pointing out that all three of Birecki's assists came on special teams, with two helpers on the power-play, to go along with one while his team was short-handed.

Wrapping things up in goal, Sullivan helped Maryland earned some similar revenge, as they knocked off the New Jersey 87s for the first time this season. After dropping their first matchup of the year back on September 22nd, Maryland evened the score with their South Division rival.

Sullivan stood tall as the anchor between the pipes, as the '02 native of Getzville, NY turned aside 24 of 25 shots he faced, en route to his 6th win of the season. Overall, Sullivan now owns a perfect mark of 6-0-0 to go along with a 2.28 GAA and a .925 save percentage.

EHLP STARS OF THE WEEK #6

The EHLP is pleased to announce that Nolan Matthews (Vermont Lumberjacks), Tait Sawden (Connecticut Chiefs), and Colin Larson (New England Wolves) have been named the Top Performers for Week #6.

While the Lumberjacks' EHL team was taking care of business on home ice, Matthews and the EHLP team were doing the same thing on the road. The '02 native of Scarborough, ME put together his own five-point weekend, helping Vermont to a two-game sweep of the New Jersey 87s. The dominant showing included four goals and an assist, with two of those goals standing up as the game-winners for his team. Matthews now has eight points in 10 total games, which puts him well ahead of his 2020-21 pace that saw him tally 13 points in 23 total games.

Speaking of two-game sweeps, Sawden and the Chiefs collected their own this past weekend, winning both of their games on Saturday against the New Jersey Renegades. After being named the EHLP Defenseman of the Month in September, Sawden has refused to slow down in October, and that includes a goal and an assist that he tallied this past Saturday. For the season, the '03 native of Old Lyme, CT now has 11 points in 10 total games to date.

The revenge pattern stayed consistent all the way through our EHLP netminder of the week, as Larson and the Wolves got even with the Valley Jr Warriors. After dropping the season opener to Valley, New England got even this past Sunday, claiming a 4-3 victory in a shootout. As for Larson, the '02 native of Roswell, GA earned his first victory of the year by stopping 28 of the 31 shots that were sent his way. 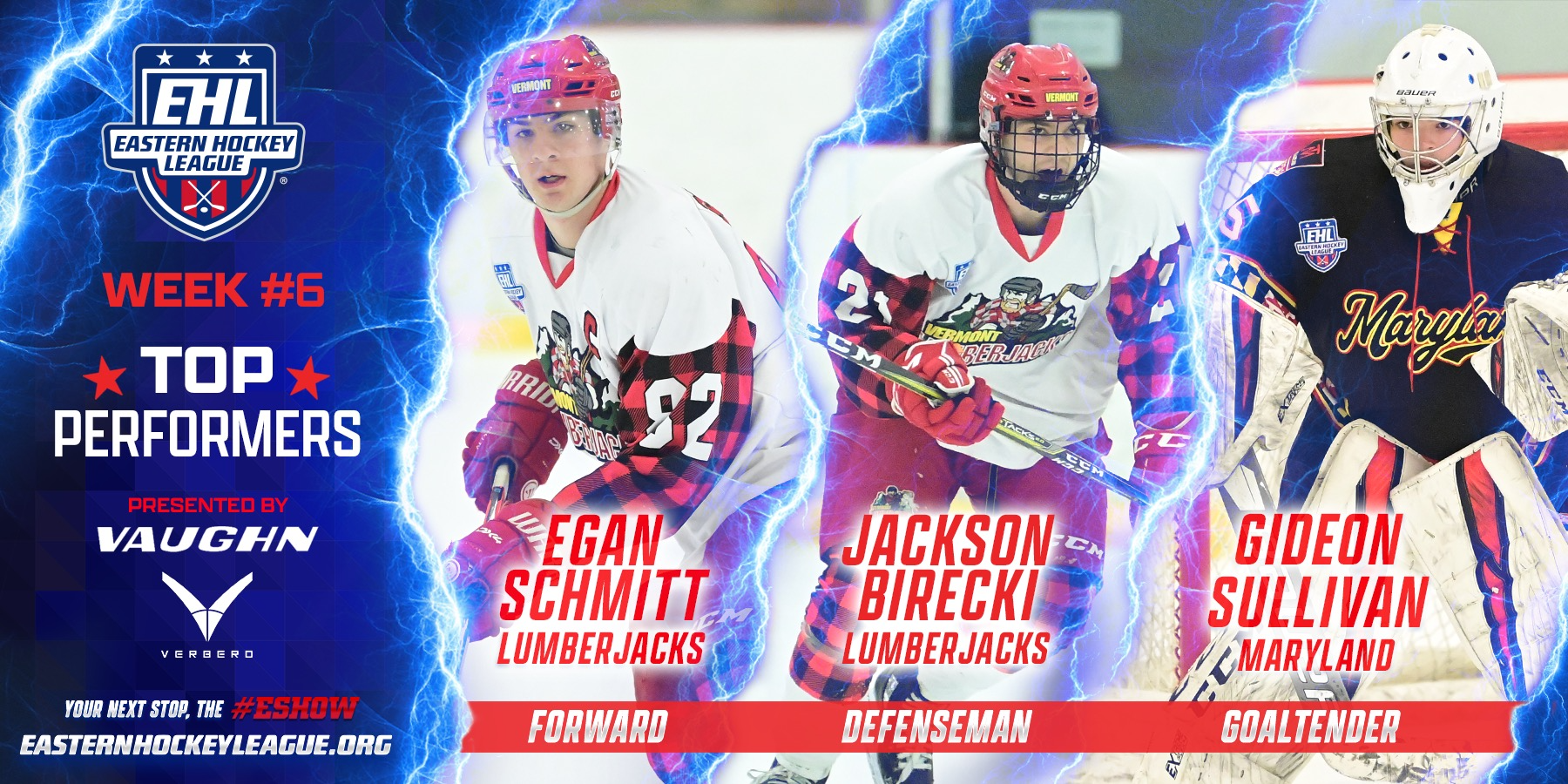 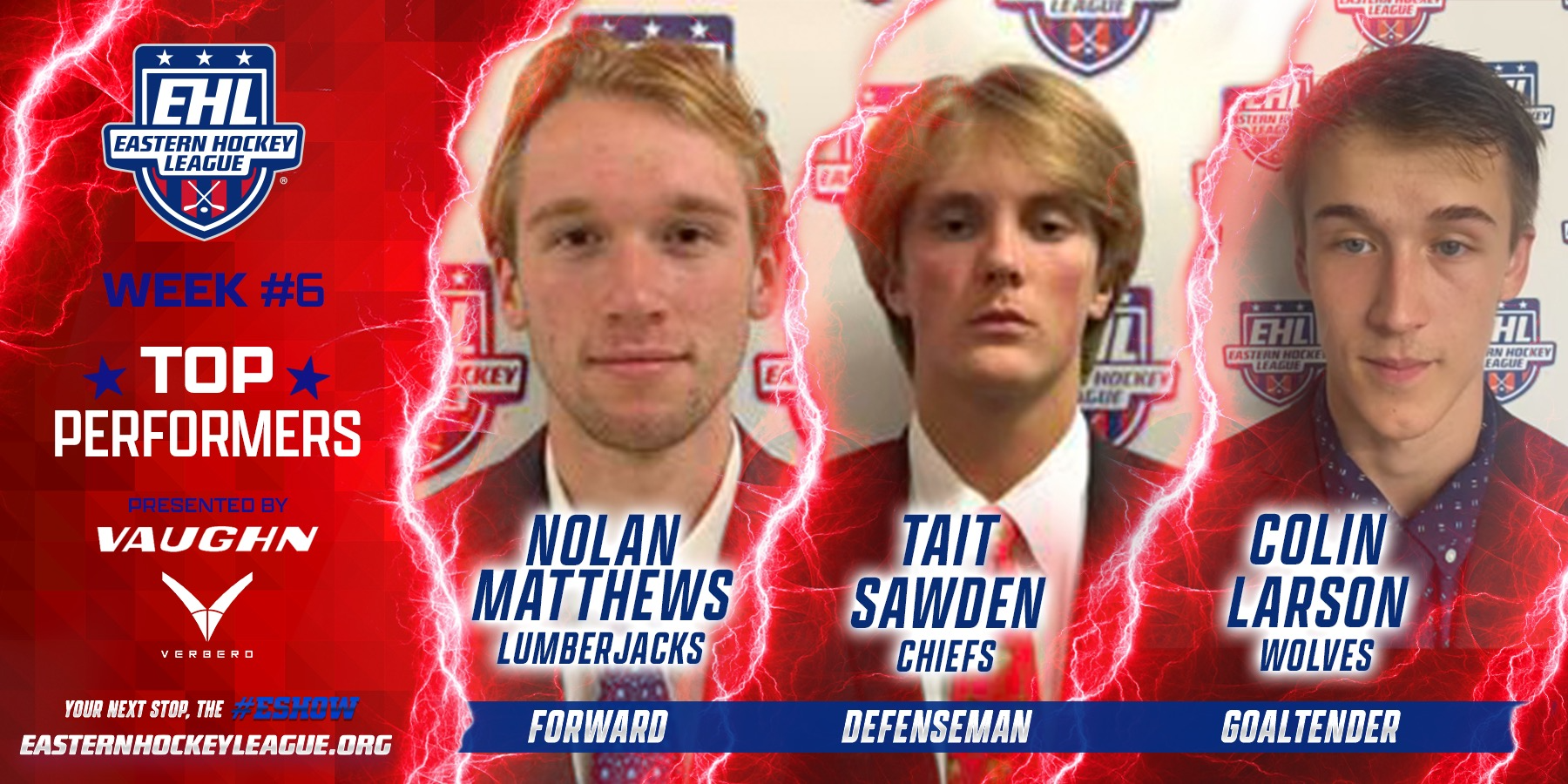