October Stars of the Month Presented By Vaughn and Verbero

Below you'll find the 2nd set of monthly award winners in the #EShow. The forward and defenseman awards are presented by Verbero Hockey, while the goalie recognition comes courtesy of Vaughn Custom Sports.

Callanan, Mettler, and the Apple Core won three games in the month of October, and currently sit in 2nd place in the Central Division, five points behind the Railers Jr Hockey Club for the top spot. New York averaged over four goals per game in October, with Callanan and Mettler leading the way.

Starting with Callanan, the '01 native of Stony Point, NY scored 12 goals in the ten total games and added in an additional eight assists, giving him an even 20 points in the month of October. For the season, Callanan's 27 total points put him at the very top of the league scoring charts, with the next closer scorer five points behind him.

Moving back to the blue line, and Mettler led all defensemen with 11 assists this past month. After tallying a goal and four assists in the month of September, the '01 native of Bronx, NY increased his point total all the way up to 16 with a very productive October. Mettler is now just three points away from matching his point total from the entire 2020-21 season.

The Apple Core have 13 games scheduled between now and the holiday break in December, as they'll look to continue to lean on this dynamic pair of veterans.

Speaking of productive months, the Rangers were very productive on their way to winning nine total games in October. After dropping their showcase game to the Philadelphia Little Flyers on the first day of the month, the defending champions have rattled off nine straight wins since, with Mueller earning the victory between the pipes for five of those contests.

For the season, the '01 native Rogers, MN is now a perfect 6-0-0 to go along with a stellar 1.04 GAA and a .963 save percentage. The six wins have increased Mueller's career total up to 34 throughout his time in the EHL, putting him just two victories away from cracking his way into the top-10 record books. As for his shutouts, of which two were earned in October, Mueller now has eight total to his credit. The eight shutouts rank 2nd all-time in the history of the EHL, five back of the all-time leader Brendahn Brawley (Little Flyers).

The EHLP is pleased to announce that Phillip Parker (Walpole Express), David Hassell (New Hampshire Avalanche), and Xavier Lapierre (Railers Jr Hockey Club) have been named the October Stars of the Month.

Parker and the Express posted a record of 4-2-2 in the month of October, with the '03 native of Medfield, MA leading the way for his team offensively. While playing in seven of the eight games, Parker scored 10 total goals all of which came from four multi-goal efforts. Along with his ability to find the back of the net, Parker also added in six assists to his credit. Overall, the 16-point month gives Parker 20 points in 10 total games to date.

Back on the blue line, Hassell is back for his 3rd season with the Avalanche, serving as the team's captain this year. In October, Hassell and the Avalanche posted a record of 4-1-2, and the '02 native of Newton, NH average a point per game throughout the month. With seven points in 10 total games to date, Hassell is well on his way towards keeping the trend going of improving from year-to-year with the Avalanche. After posting 12 points in 38 games his first season (2019-20), Hassell tallied 26 points in 33 games this past year (2020-21). Now, for the 2021-22 season, if he maintains the current pace then Hassell should surely set a new career high when the season comes to an end.

Wrapping things up in goal, and there simply has been no netminder better in the EHLP this season than Xavier Lapierre. The overall marks for the '02 native of Canada display a record of 6-1-0 to go along with a 0.92 GAA and a .963 save percentage. Included in those totals were four wins during the month of October and two shutouts. Lapierre has given up just six goals all season long, and he's put together a pair of very impressive shutout streaks. 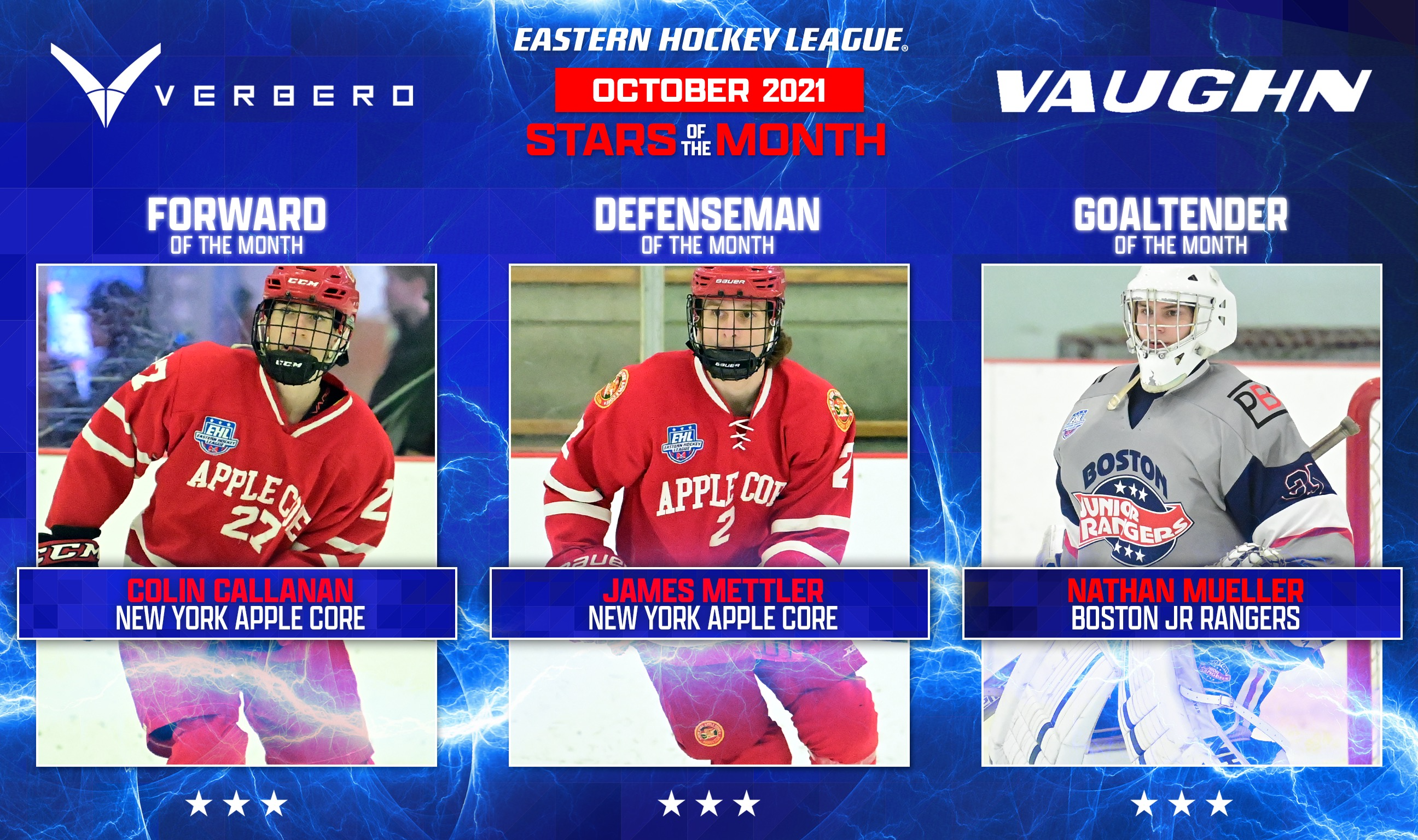 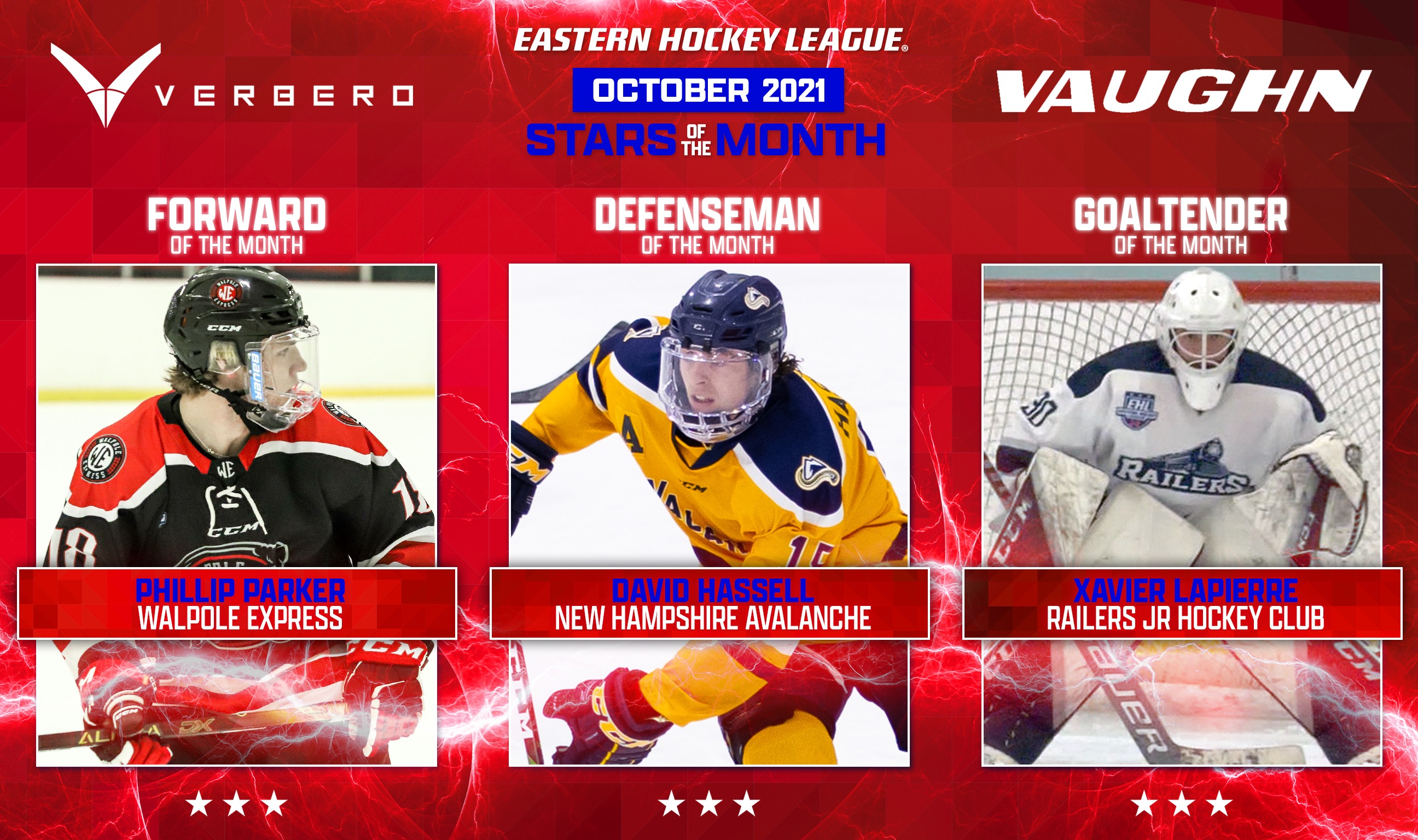