Kimball Headlines Stars of the Week from the Haverhill Showcase

Below you'll find the 8th set of weekly top performers in the #EShow. The forward and defensemen awards are presented by Verbero Hockey, while the goalie honors come courtesy of Vaughn Custom Sports.

Kimball and the Seahawks won both of their games at the Haverhill Showcase, beating the Connecticut Chiefs by the score of 3-2 in overtime on Sunday, and then sweeping the weekend with a 6-3 victory over the Connecticut RoughRiders on Monday.

As for the '01 native of Raleigh, NC, Kimball made a statement while posting six total points over the two games, tallying a pair of goals and four assists to his credit. It's also worth noting that both of Kimball's goals stood as game-winners for his team. Since joining the Seahawks at the end of October, Kimball has played in four total games, and has an impressive nine total points throughout that time.

Coming up this weekend, the Seahawks will hit the road for a pair of matchups against the Seacoast Spartans on Friday and the New England Wolves on Saturday.

Speaking of overtime winners from this past weekend, Blango picked up one as well, in his first game of the season for the Little Flyers. The '02 native of Chadds Ford, PA stole the puck near his own blue line on Saturday against the Spartans, worked his way down the ice and fired a shot past the Seacoast netminder to give Philadelphia the 4-3 overtime victory.

Blango then followed up his debut performance with a three-point effort against the East Coast Wizards on Sunday. Overall, Blango's four-point weekend turned heads throughout the league, as one of the hottest teams in the EHL has appeared to get even stronger with their most recent addition. Winners of seven out of their last nine, the Little Flyers will look to keep things rolling when they host the New Jersey 87s on Friday.

Keeping with the trend of showcase sweeps, the Railers completed their own by beating the Vermont Lumberjacks by the score of 5-4 on Saturday, the Valley Jr Warriors by a 7-1 margin on Sunday, and then putting a bow on things with a 2-0 shutout of the Boston Jr Rangers on Monday.

As for the '02 native of Austria, Kulhanek got the nod for the matchups against the Lumberjacks and the Rangers, earning his 7th and 8th respective victories of the season. To his own standards, Kulhanek's performance on Saturday wasn't worthy of what he is capable of, turning aside 22 of the 26 shots that he faced. However, he backed up that performance with arguably his best of the season, turning aside all 28 shots the Rangers sent his way on Monday. The shutout stood out due to the fact that it was the first time the Rangers have been shut out since last February.

Overall, Kulhanek now owns a mark of 8-1-1 to go along with a 2.44 GAA and a .919 save percentage. The 3-0-0 weekend, highlighted by the victory over the Rangers, will likely propel the Railers into the #1 spot in the EHL Power Rankings. Coming up, Worcester will hit the ice next for a home-and-home series spanning from Friday to Monday against the Connecticut Chiefs.

Not often do we see the same three organizations win weekly honors in both the EHL and the EHLP, but this past weekend's showcase has proven to be the rarity.

The weekend actually didn't start great for the Little Flyers, as they dropped their first contest to the New Hampshire Avalanche, with Lee scoring the lone goal for his team. However, things took off from there, as Philadelphia beat the Connecticut Chiefs and New England Wolves on Sunday, led by their '03 forward from Aston, PA.

Lee set the pace offensively scoring four goals including both game-winners on Sunday, and then chipped in an additional assist in the morning against the Chiefs. Overall the six-point weekend nearly doubled Lee's point production for the season, as he now has 14 total points through 18 games to date. The schedule doesn't lighten up by any means for Lee and the Little Flyers, as they return home this weekend to host the Valley Jr Warriors on Saturday and Sunday.

Moving back to the point, and while the Railers will likely be moving into the top spot in the EHL Power Rankings, their EHLP team has held that position in their respective rankings for over a month at this point.

The reason being that Worcester owns a stellar record of 11-1-0, which includes victories over the New Jersey Renegades and the New Jersey 87s at this past weekend's showcase. Since losing to the Little Flyers on October 17th, Worcester has won five straight games and has outscored their opponents by a 26-2 margin throughout that time.

As for the '02 native of Harvard, MA, Justicz helped contribute to this incredible stretch by picking up his 5th, 6th, and 7th assists of the season this past weekend. Justicz has five points in his last five games, as the Railers now get set for weekend matchups at home against the Walpole Express on Friday and on the road against the Avalanche on Saturday.

Wrapping things up in net, and following suit with their EHL team, Wright and the Seahawks swept the November Showcase by picking up wins over the Avalanche on Sunday and the New England Wolves on Monday. As for the '05 native of Eastham, MA, Wright's 6th victory of the season came against New Hampshire on Sunday, as he turned aside 36 of the 38 shots that he faced. The win came with a little bit of revenge for Wright, after losing to the Avalanche despite making 37 saves back on October 10th.

Wright the the Seahawks have three games left on the schedule, leading up to Thanksgiving. 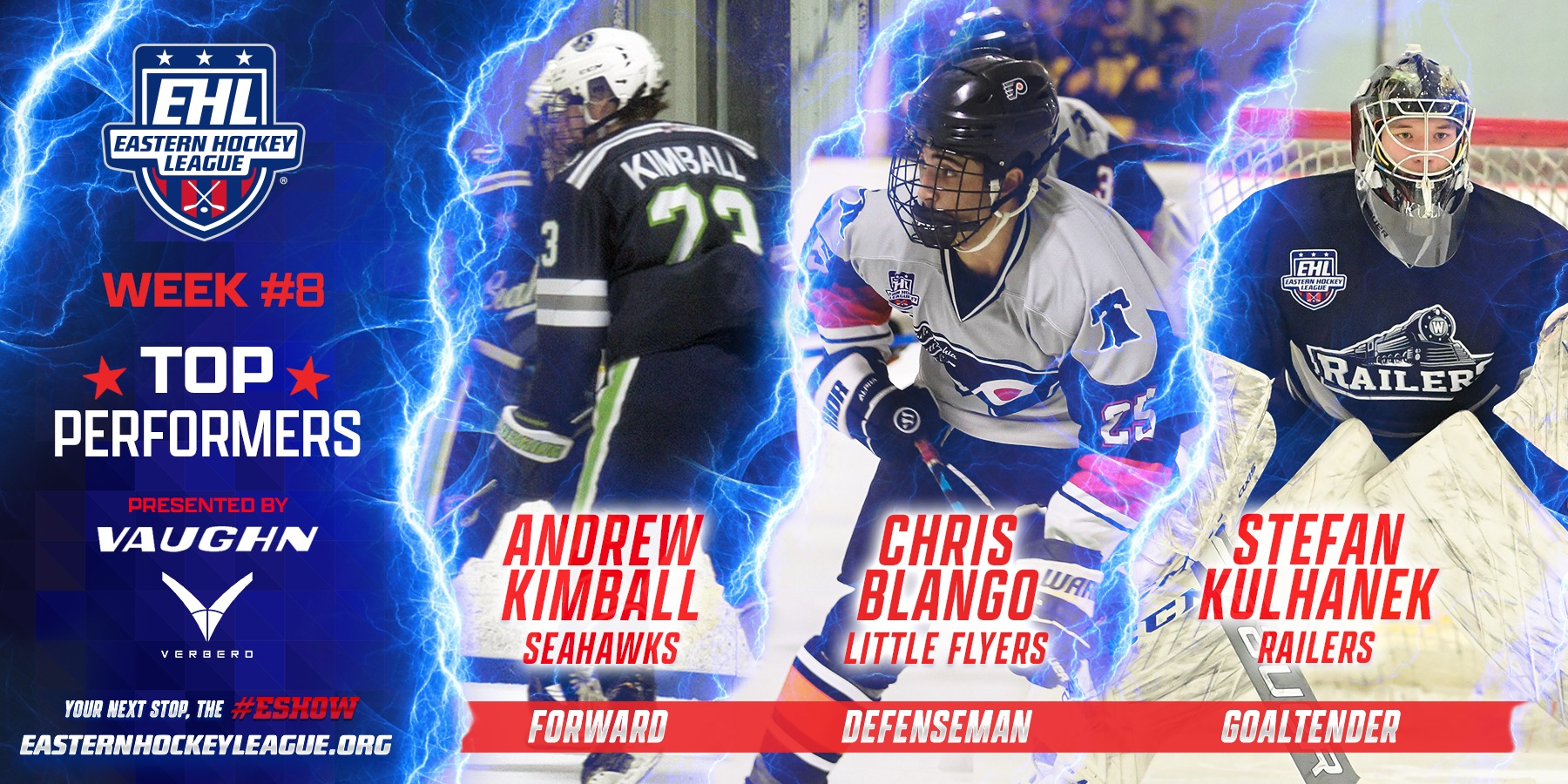 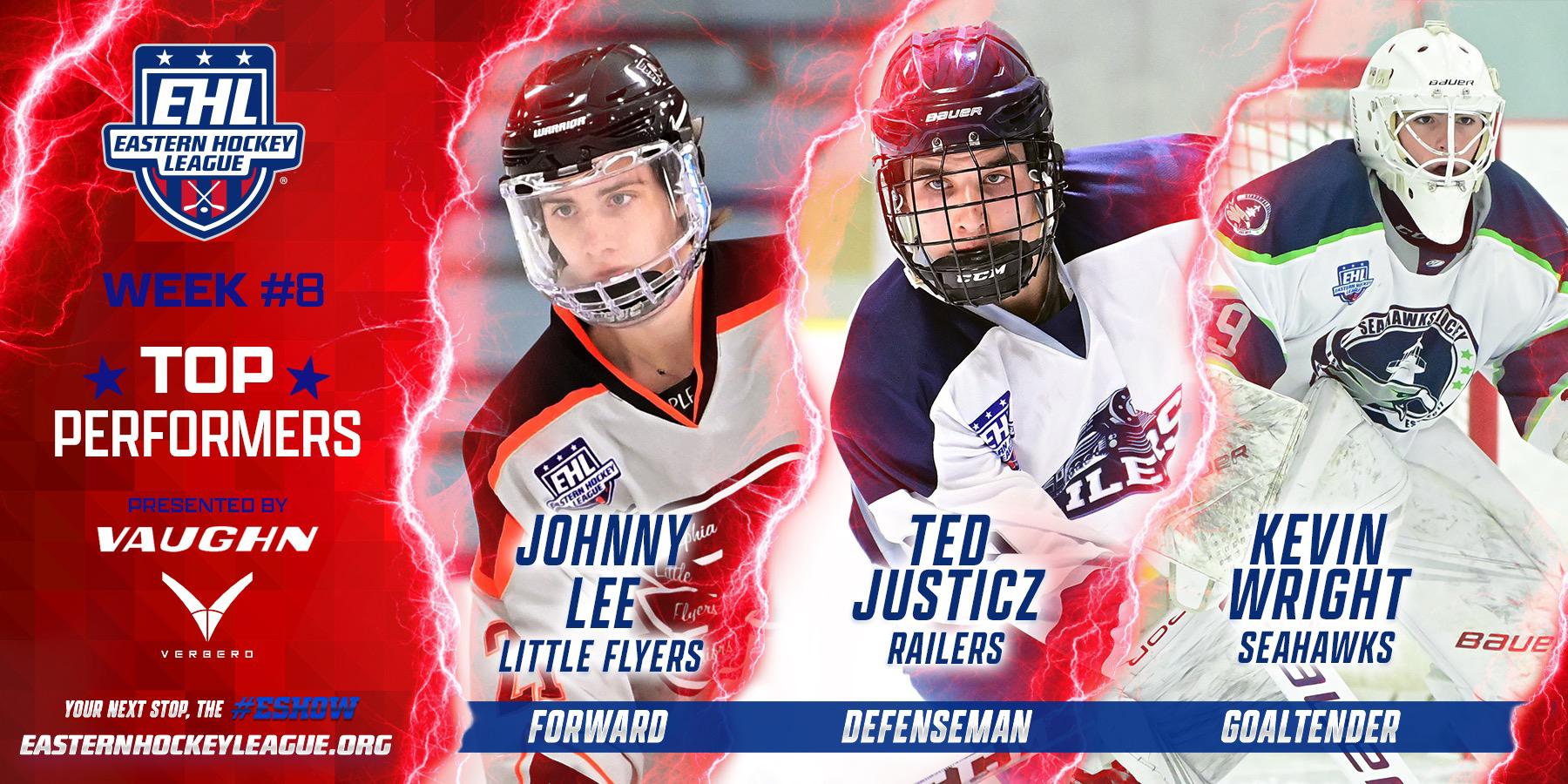