BOSTON, MA -- The college hockey season is officially underway and the a number of weekly awards have already been given out throughout the NCAA Division II and III ranks. The Eastern Hockey League (EHL) and Eastern Hockey League Premier (EHLP) is proud to congratulate all of the alumni who've taken home top honors so far. 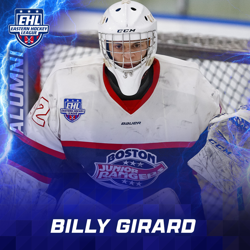 Billy Girard (Boston Jr. Rangers -- University of New England) was recently named the Goalie of the Week and the Rookie of the Week in the CCC.

CCC Press Release -- Sophomore goaltender Billy Girard IV (Boca Raton, Fla.) picked up two wins for the University of New England as the Nor'easters opened conference play with a sweep of Nichols. In a 7-2 victory in the opener, Girard turned away 38 Bison shots. He was tested fewer times in the back end of the home-and-home, but every save counted as he picked up the 2-1 win by making 18 saves.  He finished the week with a 1.50 goals-against average and a .949 save percentage.

EHL Career -- Girard joined the Rangers part way through the 2018-19 season, and combined with a full 2019-20 season, the '99 netminder won 42 total games throughout his time in the league. In Girard's age-out campaign, the veteran netminder was part of the EHL All-Star Team that posted a 1-1-1 record against Fitchburg State, Salem State, and UMass Boston, and later that season was named a the Co-Goaltender of the Year with Tobias Falkenstedt (Walpole, MA). Click the link below to hear Girard's interview on this week's edition of the #EShow podcast. 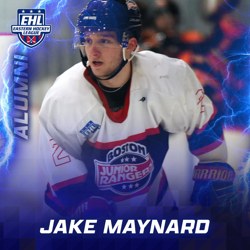 Jake Maynard (Boston Jr. Rangers -- UMass Dartmouth) was recently named the Player of the Week in the MASCAC.

MASCAC Press Release -- Maynard netted a goal and three assists for four points in a 2-0 week. Finished with a goal and assist in the conference opening 6-3 win over Worcester State and tallied two more assist in the 4-0 win over Rivier University.

EHL Career -- Maynard spent a single season patrolling the blue line for the Rangers, and in 46 total games throughout the 2018-19 campaign, the '98 native of St. John, IN collected four goals and 17 assists to his credit. 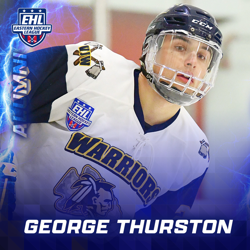 George Thurston (Valley Jr. Warriors -- Southern New Hampshire University) was recently named the Player of the Week in the NE-10.

NE-10 Press Release -- Thurston had a terrific weekend in SNHU's sweep of Franklin Pierce and Framingham State. After scoring a pair of goals and dishing out an assist in the 8-1 win over the Ravens, Thurston tallied a hat trick on Saturday in SNHU's home opening 4-2 win over the Rams. Thurston leads the NE10 with six goals through three games.

EHL/EHLP Career -- Thurston's first taste of the #EShow actually came at the EHLP level back in the 2016-17 season. The '98 native of Plymouth, MA averaged just over a point per game that season, finishing with nine goals and 18 assists in 26 total games. Fast-forward to the following two seasons, and Thurston played just under the equivalent of a full EHL campaign, combined between his time with the Walpole Express and the Warriors. Thurston averaged just over a point per game once again, with 31 points in 30 total games in the EHL.

Brad Arvanitis (Walpole Express -- Babson College) was recently named the Goalie of the Week in the NEHC.

NEHC Press Release -- Arvanitis went 1-0-1 with a 2.41 goals against average and a .926 save percentage in two starts over the weekend. The senior netminder made a season-high 37 saves in Friday's 6-3 win over 13th-ranked Elmira and followed it up by stopping 26 of 28 shots to help the Beavers earn a 2-2 OT tie with No. 5 Hobart on Saturday.

EHLP Career -- Arvanitis spent just a single season under the #EShow umbrella, defending the goal for the Walpole EHLP team back in the 2015-16 season. The '97 turned heads throughout the league that year, while amassing a stellar .924 save percentage. 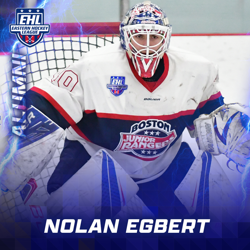 Nolan Egbert (Boston Jr. Rangers -- SUNY Brockport) was recently named the Goalie of the Week in the SUNYAC.

SUNYAC Press Release -- Transferring from UMass Boston, Egbert made his debut for the Golden Eagle's Saturday evening on the road against Neumann University. In his Brockport Debut, Egbert managed to record a shutout in the teams 6-0 Shutout victory over the Knights. Playing a total of 59:50 in net, Egbert recorded 25 saves in his shutout win. Following it's 2-0 weekend with win's over King's College and Neumann University, The Golden Eagle's will now turn to look to its matchup with SUNYAC opponent Morrisville on Saturday, November 6th at 7 p.m.

EHL Career -- In a similar pattern to Girard, Egbert spent a little over a year and a half with the Rangers organization, capped off with a Goalie of the Year honor at the end of the 2017-18 season. That year featured the first installment of the EHL Frozen Finals, in which Egbert helped lead the Rangers to their first appearance. Overall, Egbert's name sits just one ahead of Girard's in the record books, as he finished his EHL career with 43 total wins to his credit.

Donny Flynn (New Jersey Rockets -- Wilkes University) was recently named the Player of the Week in the UCHC.

UCHC Press Release -- Flynn started the 2021-22 season off in a strong way, tallying three points on a goal and two assists and was plus-3 as Wilkes won the Buffalo State Bengals Classic over the weekend. Flynn scored a goal and added an assist in Friday’s 5-2 win over Fredonia State and followed that up with an assist in a 2-1 victory over Buffalo State in the championship game Saturday.

EHL Career -- Flynn's name was 'household' throughout his time in the EHL, spanning from 2015-2017. The '96 native of Randolph, NJ made a name for himself as one of the top scorers in the league, tallying 138 points throughout 94 total games. 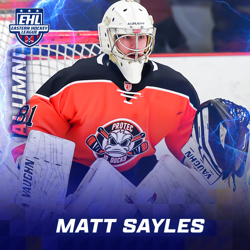 Matt Sayles (Protec Jr. Ducks/New Jersey 87's -- Nazareth University) was recently named the Goalie of the Week in the UCHC.

UCHC Press Release -- Sayles allowed just one goal and made 42 saves in a pair of wins over the weekend to begin UCHC play. Sayles made 18 saves in a 3-0 shutout win over Lebanon Valley on Friday for his first collegiate shutout and stopped 24-of-25 shots in a 6-1 victory over Arcadia on Saturday.

EHL Career -- Sayles began the 2020-21 season with the 87's, and later finished the year across the state with the Ducks. Overall, the 2000-born native of Milton, GA won 16 total games throughout his final season of junior hockey. 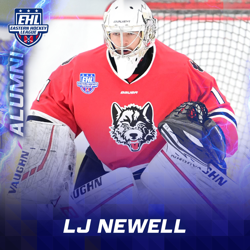 Rivier Press Release -- Newell has played in two contests for the Raiders in net, with both games coming as wins. Newell made over 40 saves in both contests and helped keep the opponents at bay long enough for Rivier to come back in both games. Overall, he has 83 saves and a .912 saver percentage.

EHL Career -- Newell spent the better part of two seasons developing with the New England Wolves. From 2019-21, the 2000-born native of Littleton, CO served as the starting netminder for the Wolves, winning 21 total games throughout that time.