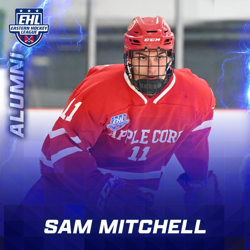 CCC Press Release -- Freshman Sam Mitchell (New Fairfield, Conn.) was a influential part of Western New England's two CCC victories this week. He scored the game-winner in a 4-3 contest against Wentworth on Saturday (Nov. 13) and then registered a goal and an assist the next day as the Golden Bears won by the same score. His goal on Sunday came on the power play. In total he had two goals and one assist on the weekend.

EHL Career -- Mitchell spent a single year in the EHL, and made a name for himself while averaging an even point per game throughout the 2020-21 regular season, with 17 goals and 20 assists in 37 total games played. The 2000-born forward then added an assist in two playoff games, and now is off to a great start to his collegiate hockey career. 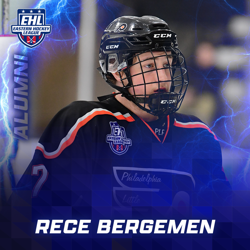 Rece Bergemen (Philadelphia Little Flyers -- Fitchburg State University) was recently named the Player of the Week in the MASCAC. This marks the 3rd consecutive week that an EHL alum has won the top honor in the MASCAC.

MASCAC Press Release -- Bergemen registered seven points on three goals and four assists over two games for the Falcons. Netted his first collegiate hat trick as well as two helpers in an 8-0 triumph over Salem State before adding a pair of assists in a 3-1 victory against Framingham State.

EHL Career -- Just like Mitchell, Bergemen spent just a single season the EHL, helping to lead the Little Flyers to the 2019 EHL Championship Game. Overall, Bergemen put together a very productive 2018-19 campaign, finishing the year with 42 points in 39 total games combined between the regular season and the postseason. 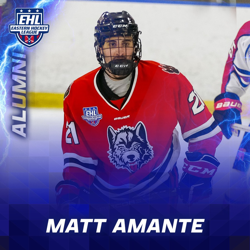 Matt Amante (New England Wolves -- Southern New Hampshire University) was recently named the Rookie of the Week in the NE-10.

EHL Career -- Amante spent two full seasons in the EHL, starting off his first eight games with the New Hampshire Avalanche, and then he headed north in the Granite State to join the New England Wolves for the remainder of his junior hockey career. Overall, in 59 career games in the EHL, Amante racked up 22 goals and 38 assists to his credit. 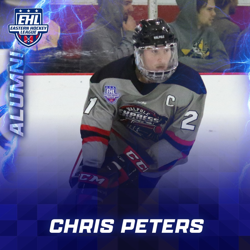 Chris Peters (Walpole Express -- UMass Boston) was recently named the Player of the Week in the NEHC.

NEHC Press Release -- Peters posted a team-high five points to lead UMass Boston to a 6-point conference weekend. The senior finished with two goals, three assists and a +4 +/- rating on the weekend. On Friday night, the senior scored twice and added an assist in UMass Boston's 9-3 win over the University of Southern Maine. He tacked on two assists in the Beacons' 4-3 win over #6 Babson College on Saturday afternoon. For the season, Peters leads the entire NEHC with 11 points and is tied for the league lead with eight assists.

EHL/EHLP Career -- Frankly put, Peters put together an illustrious junior hockey career that began in the EHLP, progressed to the EHL, and now has resulted in a player that has only continued to improve in the NCAA ranks. The '97 native of Fairpoint, NY stuck in the EHLP for just 12 total games for the New Hampshire Jr. Monarchs, tallying 24 points throughout that time. Peters then finished that 2015-16 season with 25 points in 35 total games for the New England Wolves' EHL team.

The production only cranked up from there, as Peters established himself as one of the top scorers in league history with two tremendous years with the Walpole Express. Overall, Peters' 175 career points ranks him as the 2nd highest scorer in the history of the EHL.

In addition to Peters, the EHL saw a pair of alumni get recognized with Honor Roll awards in the NEHC. 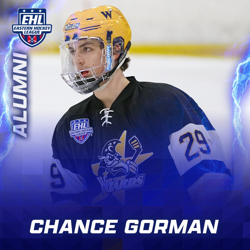 NEHC Press Release -- In one game this week, Gorman scored the equalizer in the second period against Buffalo State to begin a streak of five unanswered goals for the Soaring Eagles. In addition, Gorman assisted on EC's fourth and fifth goals of the evening to finish with three points, a career-high.

EHL Career -- Keeping with the relatively consistent trend of one-year EHL players, Gorman played out his final season of junior hockey (2019-20) with the Wizards. The '99 native of Clinton, NJ began producing from the moment he arrived in Bedford, MA, finishing the year with 68 points in 49 total games. 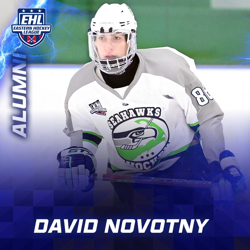 NEHC Press Release -- Novotny posted three points on a goal and two assists on a 1-1 week for the Pilgrims. In Friday's 2-1 win over Castleton the freshman forward tallied the game winning goal while NEC was shorthanded. He finished the weekend with a +1 rating on the ice.

EHL Career -- The '01 native of Boca Raton, FL joined the Seahawks late in the 2020-21 season, and was actually eligible to return this year. However, after posting eight points in 15 total games for the Seahawks, NEC came calling, and Novotny knew he was ready to begin his collegiate hockey career.

Ryan Romeo (New Hampshire Jr. Monarchs -- SUNY Brockport) was recently named the Player of the Week in the SUNYAC.

SUNYAC Press Release -- Over the weekend the Golden Eagles recorded a SUNYAC series sweep over Potsdam and Plattsburgh to tie the programs record of most wins to start a season with five, which was set back in 1980. Graduate student and Co-Captain Ryan Romeo played a big role in the weekends sweep as he recorded a total of four points in two games with a +/- of +6. In Friday nights 3-0 shutout victory against the Bears, Romeo managed to record two points off of two assists and recorded a +1 in the +/- column. Handing Plattsburgh its second strait SUNYAC loss, Brockport managed to hand the Cardinals its most goals allowed this season, defeating them 7-3. Romeo's contribution in the game consisted of an empty net goal to close out Brockport's offensive drive, while also tallying an assist earlier in the night. in total Romeo was on the ice for five out of the seven goals Saturday night to record +5 in the +/- column. Romeo is the current leader in the points, assists and +/- categories in the SUNYAC a +10, nine points and seven assists in five games this year.

EHL Career -- The '96 native of Fairpoint, NY spent two full seasons with the New Hampshire Jr. Monarchs, helping to win the program's first and only EHL Championship in the 2015-16 season. Overall, the steady defenseman played in an even 100 games throughout his time in the EHL, tallying 38 total points along the way 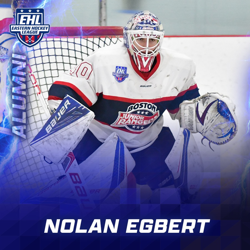 Nolan Egbert (Boston Jr. Rangers -- SUNY Brockport) was recently named the Goalie of the Week in the SUNYAC, and this is the 2nd time so far this season that the veteran netminder has claimed that honor.

SUNYAC Press Release -- Picking up his second Prestosports Goaltender of the Week Award this season, Egbert of the Golden Eagle's was a brick wall in net for Brockport in he teams weekend SUNYAC Series Sweep over Potsdam and Plattsburgh. In Friday nights 3-0 victory over the Bears, Egbert picked up his second shutout of the season over the Bears after making a total of 25 saves without allowing anything to get past him. Starting in goal again the next nights against Plattsburgh State, Egbert made total of 24 saves, one save short of a total of 50 over the weekend. His efforts would made up following key saves off of a couple of Plattsburgh breakaways, including one miraculous save that saw Egbert sprawl and lay out using his leg pads while laying down to block a shot up high. His weekends save percentage consisted of .942%. He currently ranks second in the SUNYAC in save percentage (.950%) and goals against average (1.25). Egbert's efforts in net his year have also seen him record the most wins in the conference totaling four this season, all in a row since his start in the second game of the season in a 6-0 shutout against Neumann University. Of goaltenders who have started games, Egbert has also allowed the fewest goals this season with five. Egbert and the Golden Eagles are currently tied for the programs record of most consecutive wins to start a season with five, a record set back in 1980. the Golden Eagles will look to break that record this weekend as they host Oswego St. on Friday night at 7pm in Brockport, NY at the Tuttle North Ice Arena.

EHL Career -- Egbert spent a little over a year and a half with the Rangers organization, capped off with a Goalie of the Year honor at the end of the 2017-18 season. That year featured the first installment of the EHL Frozen Finals, in which Egbert helped lead the Rangers to their first appearance. Overall, Egbert's name sits in a tie for 3rd on the all-time wins chart, as he finished his EHL career with 43 total victories to his credit. 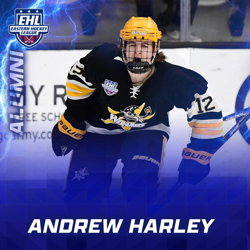 Andrew Harley (East Coast Wizars -- SUNY Brockport) was recently named the Rookie of the Week in the SUNYAC.

SUNYAC Press Release -- The Golden Eagles sophomore forward, and hometown native Harley was the Green and Gold's points leader over the weekends SUNYAC Series sweep of both Potsdam and Plattsburgh. In both games, he recorded a total of five points scoring two goals and three assists. in Friday nights 3-0 shutout over the Bears, Harley managed to record a +1 on assists during Brockport even strength and power-play goals. In Saturday nights 7-3 blowout win over Plattsburgh, Andrew Harley played a big role in the Golden Eagle's win picking up a pair of goals on the night while tallying an assists in the game and picking +2 in the +/- column. Harley's help in the score column has allowed him to record a point in four consecutive games for the Green and Gold. In the Conference, Harley is tied for second in both points (8) and power-play goals (2) while sitting in third place in assists (5) this season.

EHL Career -- As was mentioned in the SUNYAC press release, Harley spent a pair of seasons with the Wizards, and then returned home to play for the school in the town he grew up in. Throughout his time in Bedford, MA, Harley was asked to move back and forth between playing forward and defense. Regardless of the fact however, Harley was able to rack up a solid 78 total points in 91 career games in the EHL. 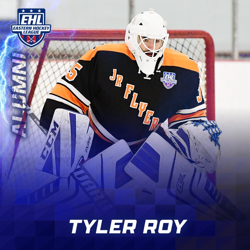 UCHC Press Release -- Roy led the Valiants to a 2-0 week with a pair of 30-plus save efforts, recording a 1.50 goals against average and a .956 save percentage. He made a season-high 33 saves in Friday's 3-2 win and stopped 32 shots on Saturday against Arcadia in a 5-1 win.

EHL Career -- Roy joined the Philadelphia Jr. Flyers part way through the 2018-19 season, and won five total games while maintaining a .913 save percentage.