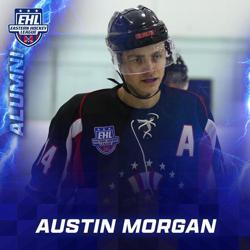 Austin Morgan (Philadelphia Revolution -- University of New England) was recently named the Player of the Week in the CCC.

CCC Press Release -- Senior forward Austin Morgan (Detroit, Mich.) led the University of New England to a weekend sweep of Suffolk in CCC play. He factored into six of the team's 11 goals with three goals and three assists. In the opener at home, Morgan recorded two goals and two assists as the Nor'easters took an 8-3 decision over the Rams. On the road, he potted a goal and an assist as UNE completed the sweep with a 3-2 win. He tally in the backend came on the power play. Morgan finished the week with a plus-2 rating.

EHL Career -- Morgan spent a pair of seasons in the EHL, helping to lead the Philadelphia Revolution to the 2018 Championship Game. Over the course of his EHL career, Morgan played in 97 total games, scoring 37 goals and dishing out 72 assists throughout that time. 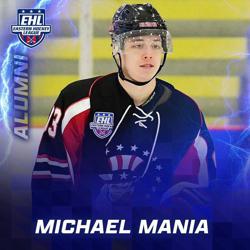 Michael Mania (Philadelphia Revolution -- UMass Dartmouth) was recently named the Rookie of the Week in the MASCAC. To date this season, Mania has now claimed this honor on a pair of occasions.

11/8 MASCAC Press Release -- Mania finished with a goal and three assists for four points in a 2-0 week for the Corsairs. Had three assists in the 6-3 win over Worcester State in the conference opener and netted a goal in the 4-0 win over Rivier University.

EHL Career -- Mania first joined the #EShow at the EHLP level, playing six games for the New Jersey 87's at the end of the 2017-18 season. The following year brought Mania over to the Revolution and up to the EHL level. In 41 total contests, Mania averaged just over a point per game with 14 goals and 32 assists to his credit. 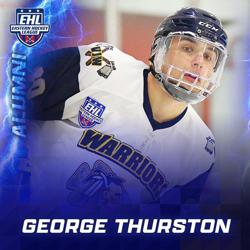 NE-10 Press Release -- Thurston was involved in five of the six SNHU goals in Friday's 6-4 win over rival Saint Anselm at The Ice Den. In addition to recording a hat trick, his second of the season, Thurston assisted on two other goals. His 10 goals and 15 points lead the Northeast-10 Conference.

EHL/EHLP Career -- Thurston's first taste of the #EShow actually came at the EHLP level back in the 2016-17 season. The '98 native of Plymouth, MA averaged just over a point per game that season, finishing with nine goals and 18 assists in 26 total games. Fast-forward to the following two seasons, and Thurston played just under the equivalent of a full EHL campaign, combined between his time with the Walpole Express and the Warriors. Thurston averaged just over a point per game once again, with 31 points in 30 total games in the EHL. 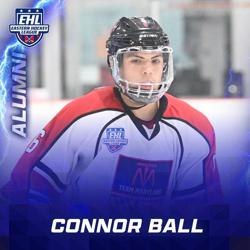 Connor Ball (Team Maryland -- Southern New Hampshire University) was recently named the Rookie of the Week in the NE-10.

NE-10 Press Release -- Ball scored his first two career goals for the Penmen just 66 seconds apart in the first period in a 3-2 win on Saturday in an NE10 Conference contest at Stonehill.

EHL Career -- Often referred to as the 'OG' member of the 2020-21 Team Maryland squad, Ball spent three seasons developing in Odenton, MD. Over the course of those three campaigns, Ball hit the ice for 107 total games, tallying 59 points throughout that time.

In addition to Thurston and Ball, the EHL saw two more alumni get recognized with Honor Roll awards from the NE-10.

Colin Philippon and Conor Foley both developed and advanced to the NCAA ranks, following time spent with the Vermont Lumberjacks. 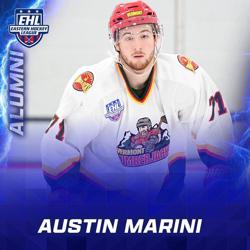 Austin Marini (Vermont Lumberjacks -- University of Southern Maine) was recently named the Rookie of the Week in the NEHC.

NEHC Press Release -- Marini played in both games for the Huskies this past weekend leading his squad to a 2-0 mark. The sophomore put together three goals and one assist for four points off seven total shots. On Friday, in the 3-2 victory against Skidmore, Marini scored the game-winning goal (first goal of his collegiate career) on the power play and added an assist for two points in the win. He followed that up with a two-goal performance on Saturday at home against Castleton in a 4-2 decision.

EHL Career -- Marini came to the EHL for his final season of junior hockey back in 2019-20, and made the most of his time while racking up 60 points in 48 total games for the Vermont Lumberjacks. Marini lined up often with Logan DiScanio and Geordan Buffoline, forming one of the most lethal forward lines in the history of the league.

Aaron Maguyon (Philadelphia Revolution -- Hobart College) was recently named the Player of the Week in the NEHC.

NEHC Press Release -- Maguyon led the Statesmen with six points on five goals and one assist in a 2-0-0 week. Against UMass Boston he scored twice, including the game-winning goal as Hobart rallied from a 3-2 deficit to defeat the Beacons 8-4 in The Cooler. On Saturday, Maguyon led all players with four points. His three goals matched the program record for goals in a game. He is the second Statesman to have a hat-trick this year. Maguyon is tied for the team lead with seven goals this season.

EHL Career -- Maguyon spent just a single season in the EHL (2015-16), before he advanced on to play out a pair of years in the North American Hockey League (NAHL). It total, Maguyon dressed in nearly ever game for the Philadelphia during his lone campaign in the EHL, tallying 14 goals and 28 assists in 45 total contests. 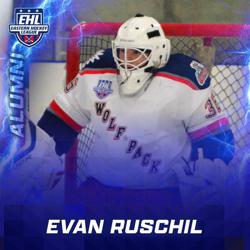 Evan Ruschil (Hartford Jr. Wolfpack -- Williams College) was recently named the Player of the Week in the NESCAC.

NESCAC Press Release -- Ruschil stopped all 68 shots he faced in the opening weekend of the season to lead the Ephs to a pair of 1-0 victories at Colby and Bowdoin. In a 1-0 win over the Mules, Ruschil stopped 43 shots, 16 in the third period, to secure the win, despite the Ephs being outshot 43-24. The Ephs were outshot again the next day, but Ruschil saved all 25 shots in a 1-0 win over the Polar Bears.

EHLP Career -- Similar to handful of players that have been mentioned this week, Ruschil spent just a single season developing in the #EShow, and he did so at the EHLP level. Throughout 14 regular season games back in the 2016-17 season, Ruschil owned a 2.64 GAA and a .919 save percentage. Fast-forward to the playoffs, and things only got better for Ruschil, as in two starts his GAA stood at a remarkable 0.99 and his save percentage was nearly perfect at .970. 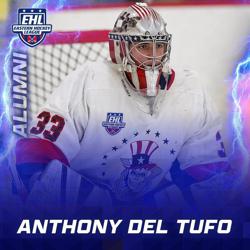 Anthony Del Tufo (Philadelphia Revolution/Team Maryland -- SUNY Plattsburgh) was recently named the Goalie of the Week in the SUNYAC. This marks the 3rd time this season that an EHL alum has claimed this honor in the one of the top conferences in all of Division III hockey.

EHL Career -- Looking back on Del Tufo's time in the EHL and the veteran netminder played out two different stints throughout his junior hockey career. He started off with Maryland in the 2018-19 season, a year in which he finished with the Maryland Black Bears in the NAHL, and he that followed up by playing out his age-out season with the Revolution. Overall, Del Tufo won 16 total games throughout his time in the EHL. 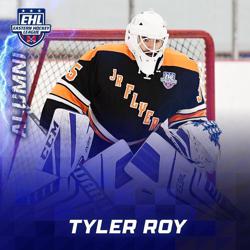 UCHC Press Release -- Roy led the Valiants to a five-point week in league play with a pair of 30-plus save efforts, recording a 2.40 goals against average and a .931 save percentage. He made 31 saves in Friday’s 5-3 win at Stevenson and followed that up by stopping a season-high 36 saves in Saturday’s 2-2 tie versus Chatham. Roy then stopped 2-of-3 shots in the shootout on Saturday to help Manhattanville gain the important extra league point. This is his second straight UCHC Goaltender of the Week honor.

EHL Career -- Roy joined the Philadelphia Jr. Flyers part way through the 2018-19 season, and won five total games while maintaining a .913 save percentage. 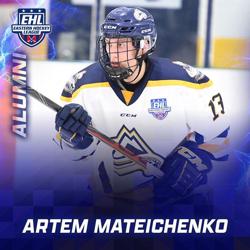 Artem Mateichenko (New Hampshire Avalanche -- Manhattanville College) was recently named the Rookie of the Week in the UCHC.

UCHC Press Release -- Mateichenko recorded a four-point week across Manhattanville's two games. He scored a power-play goal and added an assist in a 5-3 win over Stevenson on Friday. The goal was the first of his collegiate career. On Saturday, Mateichenko assisted on both of the Valiants' regulation goals to help force the shootout in a 2-2 tie.

EHL Career -- Mateichenko joined the Avalanche part-way through the 2019-20 season, and then spent the entire 2020-21 campaign with one of the top programs in the EHL. Overall, in 68 total games in the EHL, the native of Ukraine finished with 13 goals and 46 assists to his name.