Below you'll find the 11th set of weekly top performers in the #EShow. The forward and defensemen awards are presented by Verbero Hockey, while the goalie honors come courtesy of Vaughn Custom Sports.

The EHL is pleased to announce that Ryan Pomposelli (Seahawks Hockey Club), Jake Emery (Seacoast Spartans), and Owen Swanbon (Walpole Express) have been named the Top Performers for Week #11.

Pomposelli and the Seahawks split their home-and-home series with the Express, winning the front-end matchup, the 2nd Annual Thanksgiving Showdown. It was a great holiday for '01 native of Needham, MA, as he netted his first hat-trick of the season in a 4-2 victory. Pomposelli then followed things up in his team's 5-4 loss on Saturday. Overall, the four-goal week increased Pomposelli's point total up to 17 for the season, in 22 total games to date.

Pomposelli and the Seahawks are right in the thick of things while battling for playoff positioning in the East Division. With nine games on the schedule throughout the month of December, the Seahawks will look to lean on their veteran scorer as the team heads towards the holiday break.

Emery and the Spartans hit the ice for just a single game this past week, as they tied things up with the New England Wolves on three separate occasions this past Tuesday. It wasn't until Emery connected with Colin Marks in overtime that Seacoast gained their first lead of the contest, as they skated away with the 5-4 victory.

Similar to the Pomposelli and the Seahawks in the East, Emery and the Spartans are battling right in the thick of things in the North Division. Seacoast will return to action this Thursday and Friday, for a home-and-home series with the Valley Jr Warriors.

Wrapping things up in goal, this week's top netminder came from a performance in which Swanbon didn't actually start the game he played in. With Walpole trailing 4-1 at the end of 20 minutes on Saturday, the '02 native of Maynard, MA entered in relief and was absolutely perfect the rest of the way. Registering 16 saves apiece in both the 2nd and 3rd periods, Swanbon gave his team a chance to make a comeback, and that's exactly what they did in the 5-4 victory.

As noted above, the top performance from Swanbon helped Walpole earn a split of their two-game set with the Seahawks, a team they get to face-off with again on Saturday. However, Swanbon and the Express are focused first on the Railers Jr Hockey Club, the team that Walpole returns to host on Friday.

The EHLP is pleased to announce that Tyler Sitnikov (New Hampshire Avalanche), Aidan Parker (Walpole Express), and William Padula (Walpole Express) have been named the Top Performers for Week #11.

Sitnikov and the Avalanche hit the ice for just a single game this past week, coming away with a 5-4 overtime victory at the end of a back-and-forth contest with the Express. Sitnikov's overtime winner was his 7th goal of the season, and 3rd of the year. Overall, the '02 native of Salem, MA has tallied 14 total points in 17 games to date.

With the two points, Sitnikov and the Avalanche continue to battle with the Valley Jr Warriors for 1st place in the North Division standings. The Avalanche do have a huge showdown with the Warriors coming up on the 15th, but Sitnikov and his teammates are focused first on the three games they have on the schedule leading up to that matchup.

Our top defenseman and goaltender of the week come from yesterday's opponent for the Avalanche, as prior to yesterday's contest, the Express shutout the Seahawks Hockey Club by the score of 4-0 on Saturday night.

Over the course of the weekend, Parker scored his 5th, 6th, and 7th goals of the season, two of which came on the power-play. For the year, the '03 native Medfield, MA has tallied 16 points in 17 total games to date, which is good for an average of just under a point per game.

Focusing back in on the 4-0 shutout over the Seahawks, and while that was Padula's lone start of the weekend, he made the most of it while earning his 5th victory of the season. The shutout was the 1st of the year for the '03 native of Weymouth, MA and it was also the first win for the Express over the Seahawks this season.

Parker, Padula, and the Express get ready back to work this weekend a three-in-three from Friday to Saturday, all in the friendly home confines of the Rodman Arena. 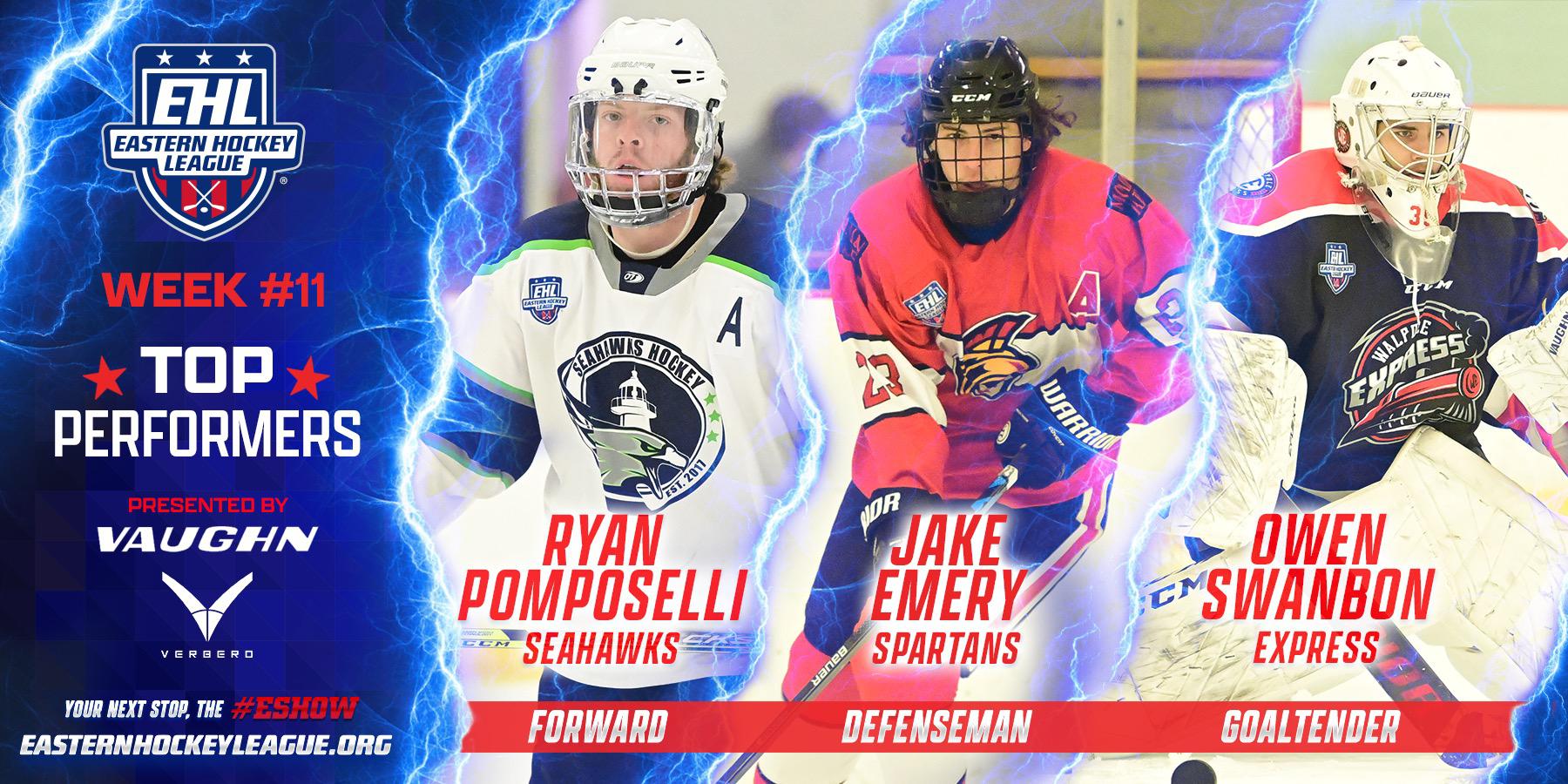 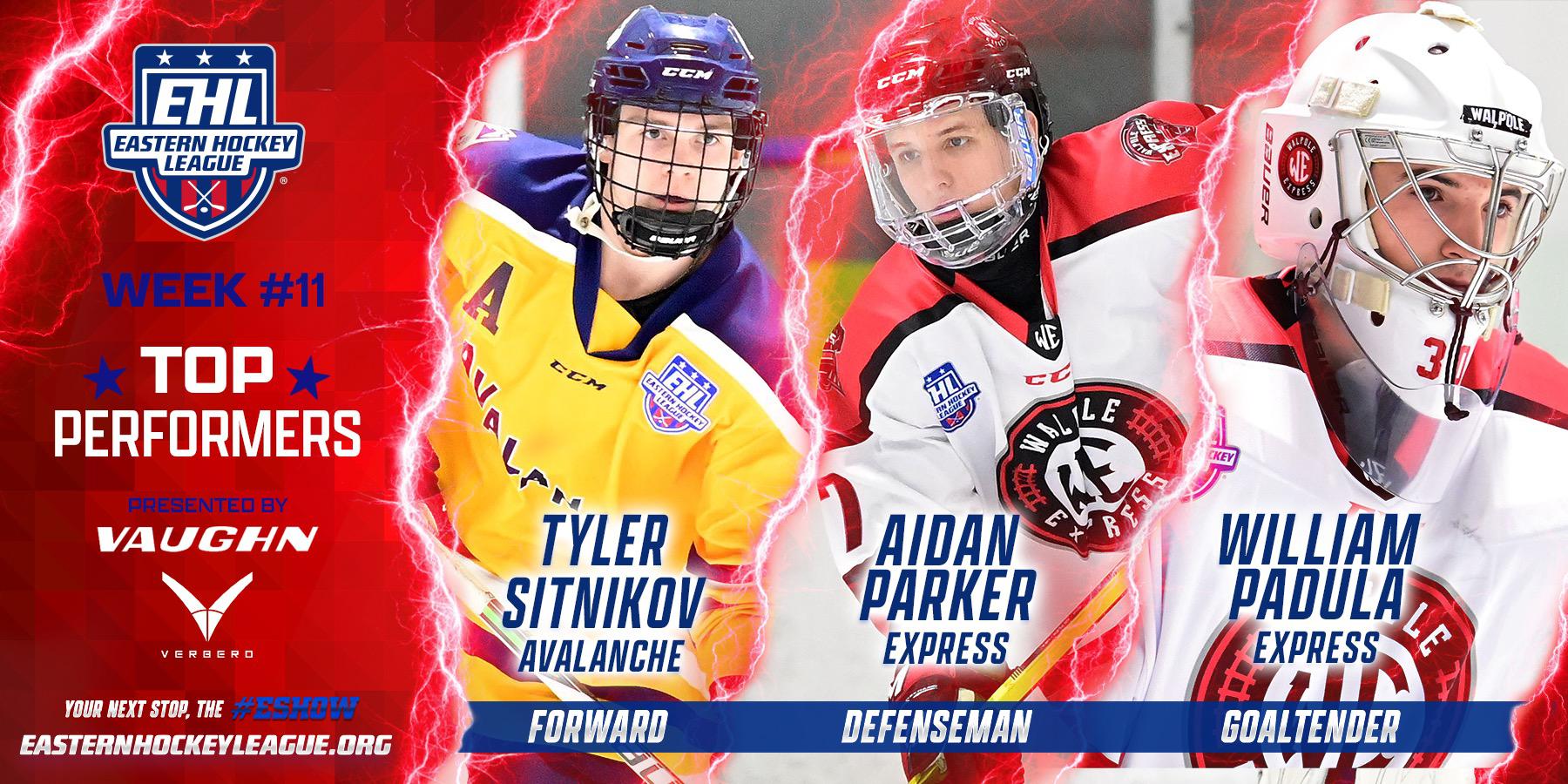