The EHL is pleased to announce that Lucas Baksay (Connecticut RoughRiders), Chris Blango (Philadelphia Little Flyers), and Nathan Mueller (Boston Jr Rangers) have been named the November Stars of the Month.

Baksay and the RoughRiders posted a record of 3-2-2 in seven total games throughout the month of November, and the productive stretch was due in large part to their third-year returning forward. Baksay picked up at least a point in six of the seven total games, and punctuated the month with a four-goal performance against Team Maryland on the 18th.

Following up that terrific effort, the '01 native of Fairfield, CT set out for the 2021 EHL All-Star Classic, where he picked up an assist while helping to lead Team Red to the Championship Game. Overall, Baksay has 26 points in 18 total games to date, and if he can keep the momentum rolling, he has a very strong chance of reaching the 100-point plateau before the regular season is complete. For his EHL career, Baksay currently has 76 points in 94 regular season games to date.

Despite playing in just four total games throughout November, Blango made them all count while tallying a pair of goals plus a trio of assists. The '02 native of Chadds Ford, PA made his debut for the Little Flyers on the 6th at the Haverhill Showcase, and scored the overtime winner against the Seacoast Spartans. Blango went on to add a goal and two assists to his credit the very next day against the East Coast Wizards, and has quickly established himself in the EHL.

Blango and the Little Flyers are battling right in the thick of things in the South Division, with a seven-game slate scheduled throughout the month of December, leading the team up to the holiday break.

This makes it three for three for the Rangers, as no other team has won a Goalie of the Month award so far this season. Since Chris Jackson claimed the honor at the end of September, Mueller has returned and won the award in now back-to-back months. The 2020-21 EHL Goalie of the Year has been lights out this season, and that includes giving up just one single goal in the month of November. Mueller did suffer a shootout loss at the hands of the Walpole Express on the 20th, but regardless of the fact, his 9-0-1 record to go along with a 0.73 GAA and a .973 save percentage is simply astounding.

The '01 native of Rogers, MN has cracked his way inside the top-10 chart for all-time goaltending victories, and is nearing the very top of the list for shutouts. Combined between the regular season and the postseason, Mueller needs 15 more wins and three more shutouts to finish at the top of each respective category. It won't be easy by any means, but if he remains as hot as he's been, both records are very attainable.

The EHLP is pleased to announce that Johnny Lee (Philadelphia Little Flyers), Aidan Parker (Walpole Express), and Jared Packman (New Hampshire Avalanche) have been named the November Stars of the Month.

Lee and the Little Flyers posted a record of 4-1-2 in seven total games in the month of November, and the productive month moved the club all the way up to 1st place in the South Division standings. As for the '03 native of Aston, PA, Lee set the pace for his team offensively by scoring six goals, including a pair of game-winners. When you then tack on the four assists that Lee notched, he proved to be the top point producer for the month of November in the entire EHLP. For the season, Lee now has 18 points in 22 total games to date.

Looking forward, Lee and the Little Flyers have a very difficult month of December on tap, with six total games on the schedule. It's also worth noting that exactly half of those games (three), are against one of the top teams in the EHLP in the Railers Jr Hockey Club. Philadelphia will undoubtably look to lean on their top scorer throughout the final month of the calendar year.

Moving back to the blue line and we come across another player, who for his position, led the entire EHLP in scoring throughout the month of November. The '03 native of Medfield, MA tallied nine total points in month, including four separate two-goal performances. For the season, Parker now has seven goals and nine assists in 17 total games to date.

With seven games on the schedule in December, Parker will look to help Walpole improve on their playoff positioning in the ever-difficult East Division.

Last, but not least, we get to the top netminder from the month of November. In three total starts for the Avalanche, Packman was a perfect 3-0-0, earning victories over the Little Flyers, Railers, and Boston Jr Rangers. With the perfect month, the '02 native of Suffern, NY improved his overall record up to 5-1-1 for the season, to go along with a 1.73 GAA and a .935 save percentage.

Coming up in December, New Hampshire will hit the ice for just three total games, highlighted by what could be a first-place showdown in the North Division, on Wednesday the 15th against the Valley Jr Warriors. 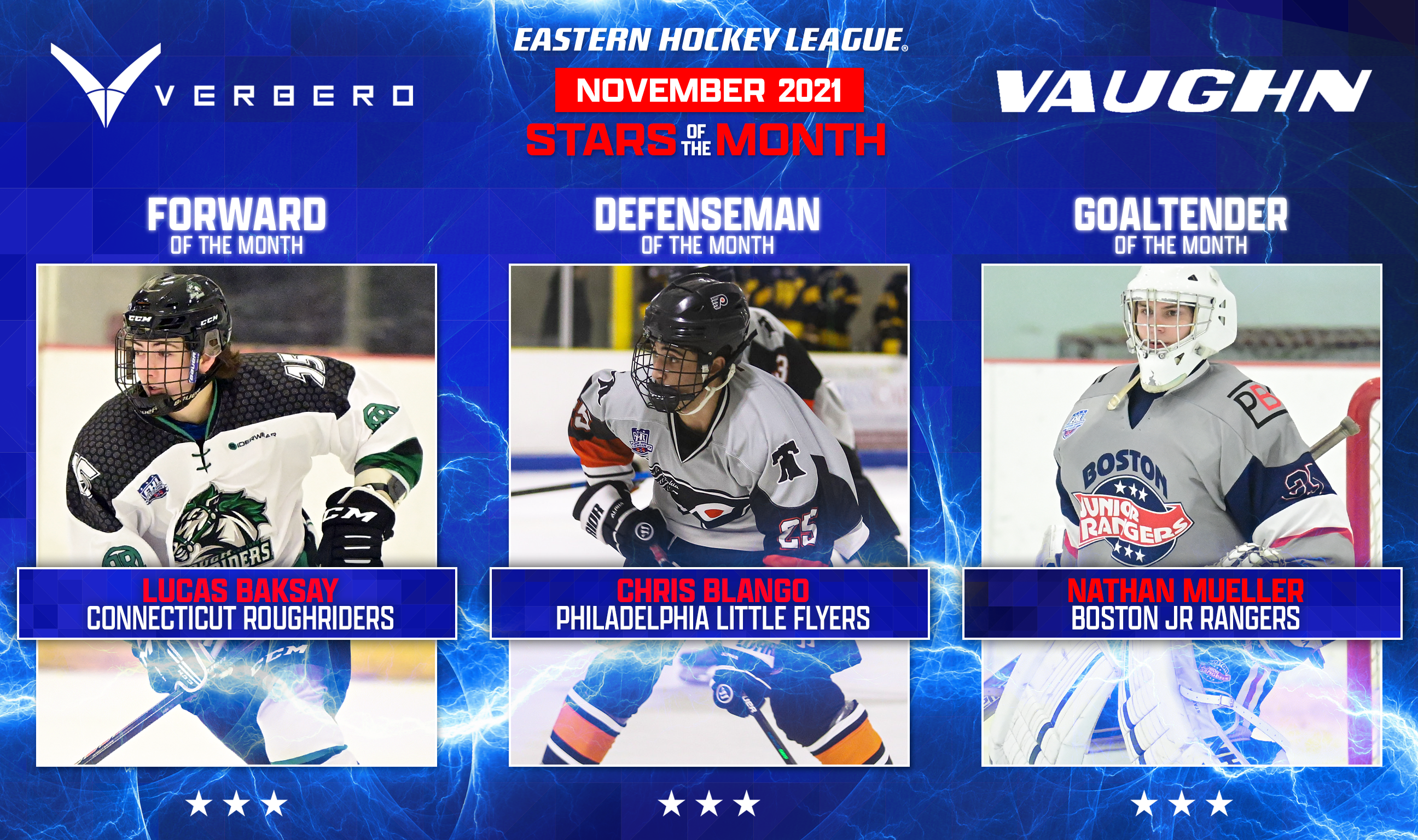 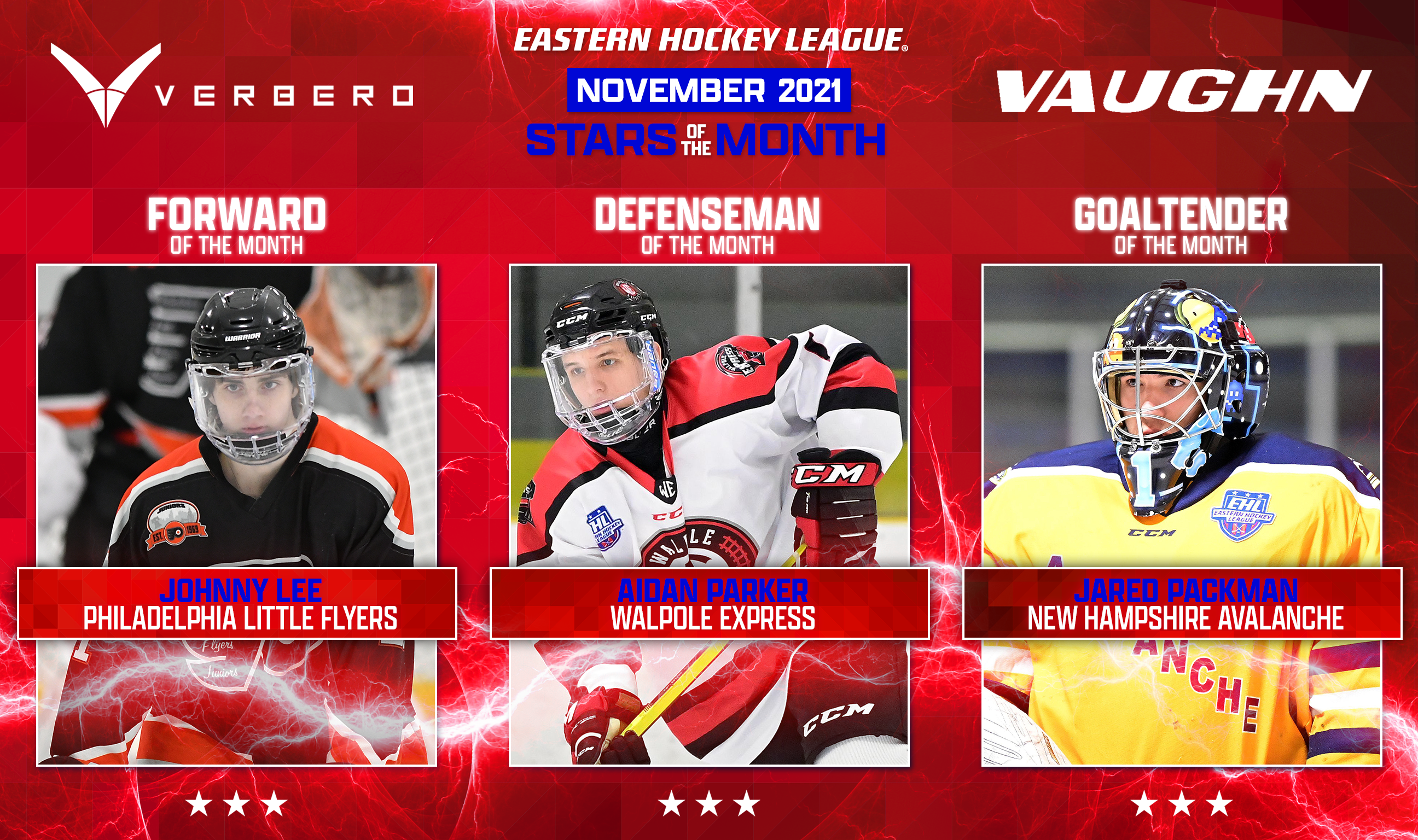