December Stars of the Month Presented By Vaughn and Verbero

Below you'll find the 4th set of monthly award winners in the #EShow. The forward and defenseman awards are presented by Verbero Hockey, while the goalie recognition comes courtesy of Vaughn Custom Sports.

The EHL is pleased to announce that Nick Weber (New York Apple Core), Declan House (New England Wolves), and Ronan Mobley (New Hampshire Avalanche) have been named the December Stars of the Month.

Weber and the Apple Core finished the month of December with a record of 2-3-1 in the six games that they played, capped off by a 2-0 shutout of the Boston Jr Rangers in one of the final games of the Newington Showcase. The '01 native of Woodbury, MN played a role in each goal for his team in that contest, all part of a month that saw Weber tally at least a point in all six matchups for his team.

Overall, Weber's 13-point month increased his season total up to 33 for the year, and when you combine that with the 12 points that he racked up last season, the play-making forward is nearing in on the 50-point plateau. Looking ahead, Weber and the Apple Core will begin the final stretch of the regular season in a tie with the Connecticut RoughRiders for 3rd place in the Central Division. New York will return to action with a pair of home games this Friday and Saturday against Team Maryland.

House and the Wolves owned a record of 4-4-0 in the month of December, highlighted by their own 4-2 victory over the Rangers. The '01 native of Roselle Park, NJ scored the game-winning goal against the Rangers on the 4th, which was one of three tallies he racked up in the final month of the calendar year. Tack on five additional assists in December, and the eight total points House notched led all defensemen throughout the league.

Overall, House now has 15 points in 25 total games to date, which gives him 88 career points throughout his time in the EHL. With 21 games remaining in the 2021-22 regular season, House needs to average just over a half-point per game in order to surpass the 100-point plateau.

Wrapping things up in goal, and Mobley was only goalie in the EHL to post a perfect record of 6-0-0 in the month of December. The '01 native of Playa Del Rey, CA only gave up seven goals throughout that time, with a pair of shutouts mixed in against the East Coast Wizards and Walpole Express.

Overall, Mobley leads the league with 16 total victories and ranks 2nd in Goals Against Average (1.40), Save Percentage (.941), and Shutouts (5).The Avalanche are currently the top-ranked team in the league with a record of 22-3-3, and they are off until January 11th, when they return for a huge matchup of their own against the Rangers.

The EHLP is pleased to announce that Evan Gravel (Walpole Express), Jack Bowers (Railers Jr Hockey Club), and Mitchell Taylor (Boston Jr Rangers) have been named the December Stars of the Month.

Gravel and the Express posted a mark of 4-3-0 in seven games played throughout the month of December, with the '03 native of North Smithfield, RI tallying at least a point in all but one of those contests. Overall, Gravel's 11-point month gives him 36 total points for the season, which places him just four back of his teammate Phillip Parker for the league-lead in the EHLP. It's also worth noting that included in Gravel's productive final month of the calendar year was his 2nd hat-trick of the season.

Looking forward, Gravel and the Express are battling for playoff position in the East Division, a four-team section that has staked its claim as the toughest division in the league. Walpole will return to action this Saturday night, when they travel to take on the Rangers at 8:10 pm.

Sticking with the East, Bowers and the Railers encountered a few hurdles throughout the month, racking up a record of 5-2-1 in the eight games that they played. While the '02 native of Bethesda, MD only found the back of the net once, the same could not be said with regards to the assist total that Bowers accumulated. The seven-assist month gave him eight points in December, which doubled the four points that Bowers tallied in the months of September, October, and November combined.

Coming up, Bowers and the Railers will get back to work when they travel to take on the Valley Jr Warriors and stay on the road to face-off with the Connecticut Chiefs on Sunday.

Putting a bow on things between the pipes, the Rangers only played four games in December, but skated away victoriously in each and every contest to hit the break with an active winning streak of seven total games. Stretching things out to October 24th, and the Rangers have won 11 of their last 12 contests.

As for the '02 native of Hamburg, NY, Taylor got the nod in the wins over the New Jersey 87s and the Warriors, turning aside 46 of the 47 total shots that he faced. The near-perfect month improved Taylor's record up to 6-4-0 for the season, lowered his GAA down to 2.80, and increased his save percentage up to .916. Also for Taylor, the shutout of the 87's was his first since his first start of the year for the Rangers, as he will now look to carry the momentum over into 2022. 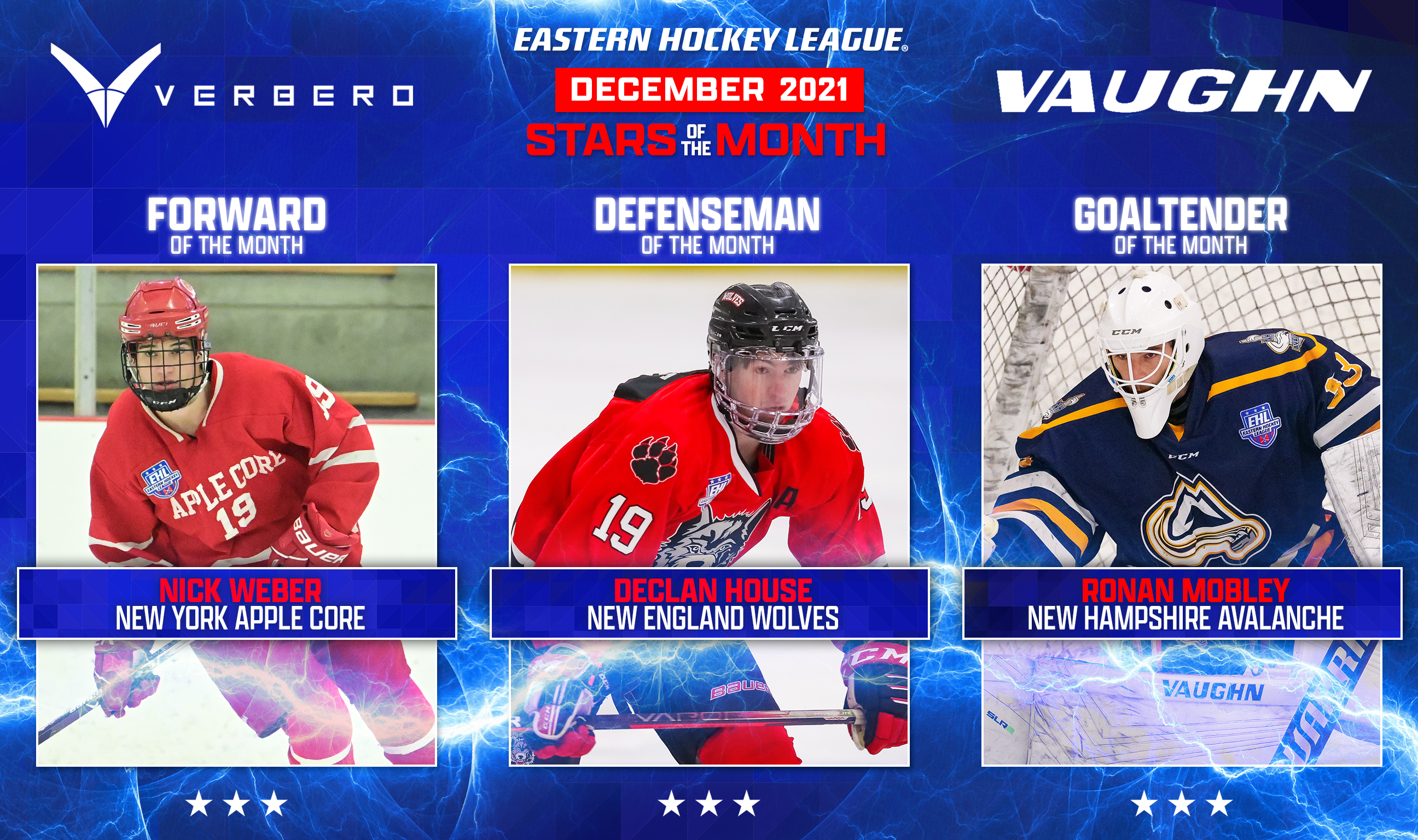 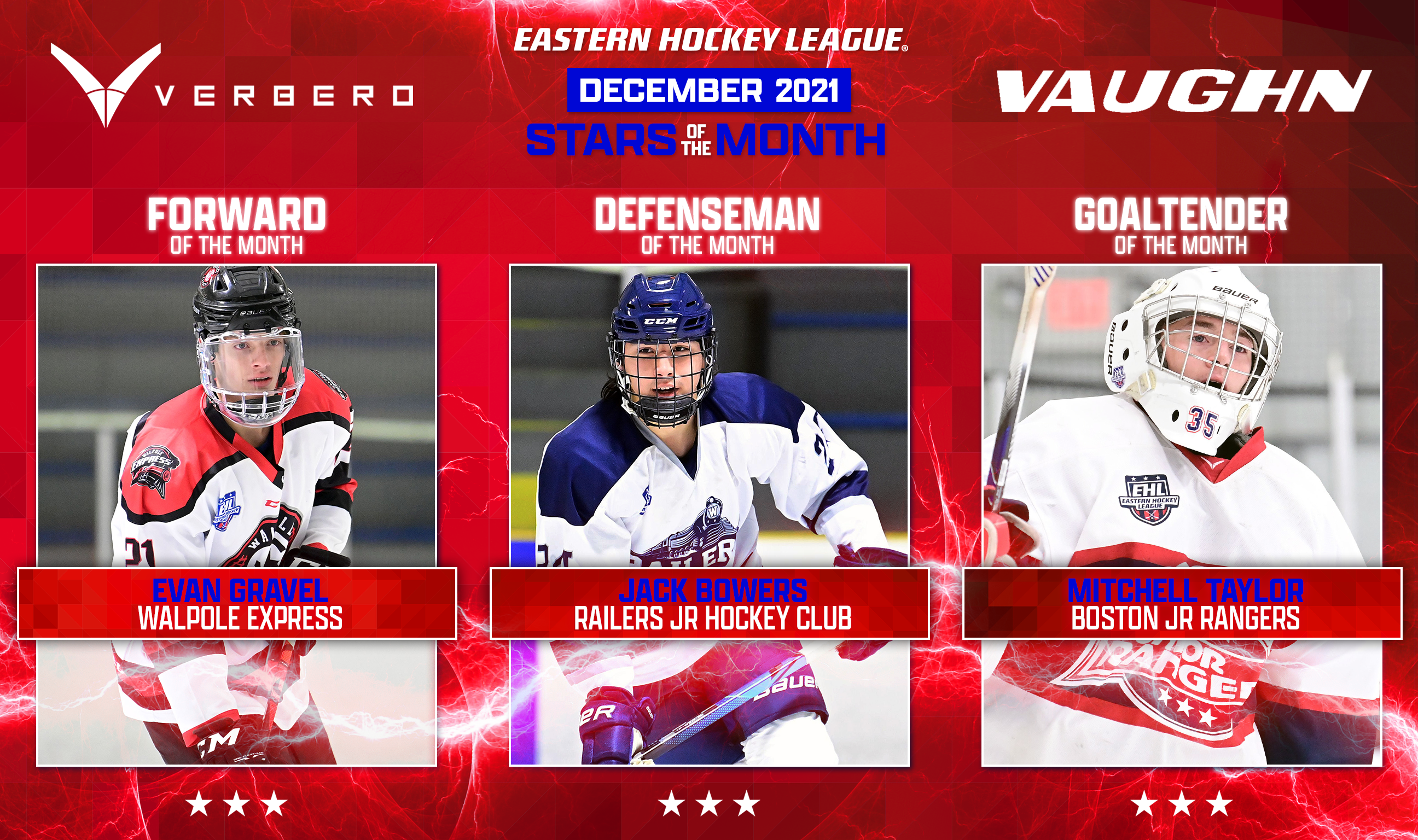