BREWSTER, NY -- Jackson Bernard, a goaltender for the New York Apple Core, has committed to Adrian College for the fall of 2022.

The '01 native of Huntley, IL is in his 2nd season with the Apple Core, and over the course of his time in the Eastern Hockey League (EHL), Bernard has won 16 total games for New York.

"I know this is only junior hockey but he's a pro’s pro by the way Jackson conducts himself professionally both on and off the ice,” said Apple Core head coach and general manager Mike LaZazzera. “He’s the first guy on the ice and the last guy off. One of the best puck-handling netminders I have ever coached at all levels I have coached. Throughout the season Jackson has been like a third defenseman out there for us.”

The praise didn't just stop there with Coach LaZazzera.

“Jackson is always prepared and ready to go,” said Apple Core assistant and goaltending coach Matt Grogan. "His techniques are sound, and as well as being an elite puck handler, he's never afraid to come out of the crease. Along with those traits, he shows a great work ethic and commitment to his team.”

Outside of his two coaches, Bernard has turned heads across the league throughout his time in the EHL and look no further for proof then his appearances on both EHL College Series All-Star Team and at the 2021 EHL All-Star Classic.

The All-Star netminder took some time to talk about his commitment to the top-ranked team in all of NCAA Division III hockey.

“I’m super excited to be committing to Adrian College for the fall of 2022," said Bernard. "I’m extremely grateful for Adrian giving me the chance to be a part of a top contending team in the nation. I can’t thank everyone at the Apple Core enough for the opportunity to come back and play this year, as well as wear an A as part of the leadership group. I want to thank all of our coaches for all of their hard work and helping me with my commitment. I also wanted to thank our team staff, our billet families, and rink community for making my time with Apple Core all the more enjoyable with all of their support.” 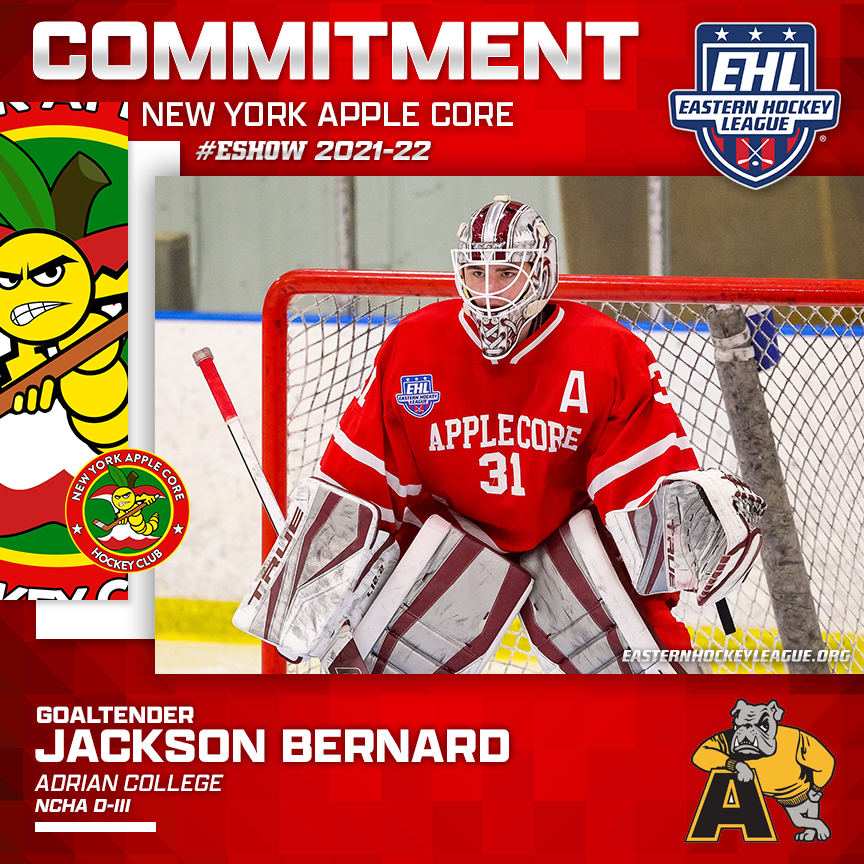