Below you'll find the 17th set of weekly top performers in the #EShow. The forward and defensemen awards are presented by Verbero Hockey, while the goalie honors come courtesy of Vaughn Custom Sports.

The EHL is pleased to announce that Adam Beauvais (Philadelphia Little Flyers), Ryan Brow (Protec Jr Ducks), and John Profaci (Seacoast Spartans) have been named the Top Performers for Week #17.

Beauvais and the Little Flyers won all four of their games this past week, and the team absolutely exploded offensively. As for '01 native of Macomb, MI, Beauvais was one of the catalysts up front for Philadelphia, tallying 12 total points in the four games. Since returning to the Little Flyers in mid-October, Beauvais has notched 29 points in 25 total games to date, which gives him an even 50 points throughout his career in the EHL.

Looking forward, the Little Flyers still own games in hand over all three other teams in the South Division, with plenty of matchups still remaining between Philadelphia and the New Jersey 87s, Team Maryland, and the Ducks. The battle for playoff positioning is as fierce as ever in the South.

Speaking of perfect weeks, Brow and the Ducks won both of their games this past week against the Connecticut RoughRiders. Each matchup required extra time to determine a winner, and each game showcased Protec's ability to come from behind to earn the victory. With the pair of wins, the Ducks now own the longest active winning streak in the EHL at six games, one victory ahead of the mark that the Little Flyers are at.

As for '01 native of Monroe, MI and SUNY Brockport commit, Brow finished the week with a pair of goals and a pair of assists to his credit, giving him 29 points in 33 total games to date. With points now in three straight games, Brow will look to keep things rolling with a pair of road matchups tomorrow and Thursday against the Connecticut Chiefs.

Wrapping things up in goal, Profaci and the Spartans earned a weekend sweep of their own, beating the Railers Jr Hockey Club at home on Friday, followed by a road victory over the New England Wolves on Saturday. The '01 native of Madison, NJ earned his 2nd and 3rd respective wins of the season while stopping 51 of the 55 total shots that he faced.

The four-point weekend pushed Seacoast back into 2nd place in the North Division, and they will look to make it three victories in a row when they return home to host the East Coast Wizards on Friday.

Tatro and the Warriors traveled north for a pair of games this past weekend, splitting their series with the Vermont Lumberjacks. As for the '03 native of Salisbury, MA, Tatro's pair of goals were accompanied by a pair of assists, and his four-point weekend now gives him nine total points in seven games to date.

Looking forward, Valley is currently tied with Vermont for 2nd place in the North Division, which means if the playoffs started today they would face each other in the First Round. Now, as the fight to earn home-ice advantage grows, Tatro will look to to continue to lead the way with a pair of home matchups this upcoming week against the New Hampshire Avalanche and the Railers Jr Hockey Club.

Moving back to the blue line, Morris and the Rangers swept their weekend set of games, beating the Railers on Saturday night and the New England Wolves on Sunday afternoon. The '04 native of Lakeland, FL picked up his 14th and 15th assists of the season this past weekend, giving him 16 points in 31 total games to date.

With the pair of victories, Morris and the Rangers moved back ahead of the Railers by two points at the top of the East Division standings. Looking forward, the Rangers next five games will take them on the road for every contest, starting with the Walpole Express this upcoming Sunday afternoon.

Sticking with the East, and putting a bow on things in goal, posted a record of 1-0-1 over the weekend, with the '02 native of Canada earning the victory over the Avalanche on Sunday. Chasse played a near-perfect game while turning aside 30 of the 31 total shots that he faced, en route to his 7th win of the season. For the year, Chasse now owns a mark of 7-1-0 to go along with a 1.78 GAA and a .947 save percentage.

While the Rangers and Railers currently own the top two spots in the East standings, Chasse and the Seahawks find themselves not far behind in the race. The Seahawks are off this weekend, but will return next weekend for a home-and-home series of their own against the Express. 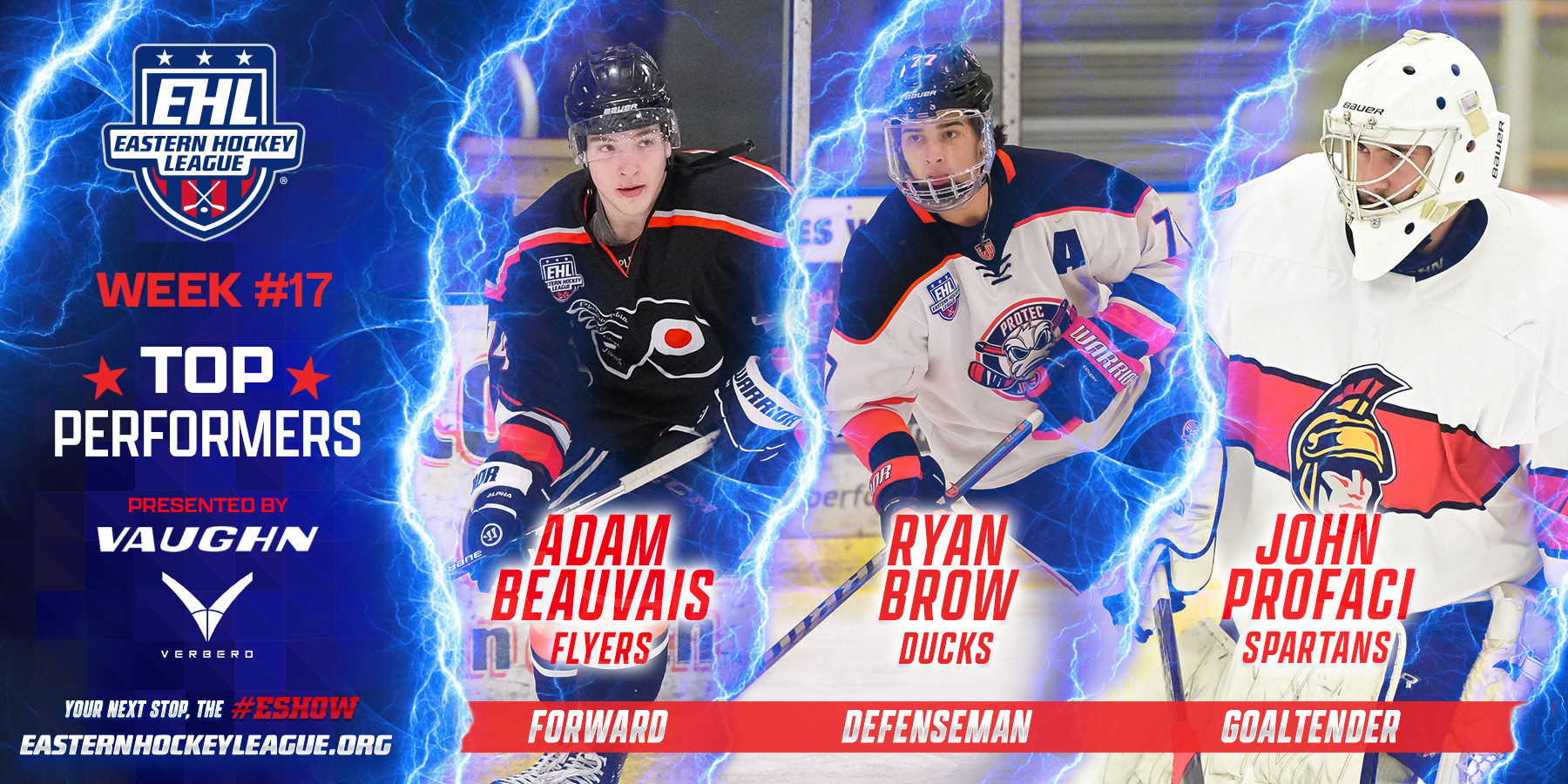 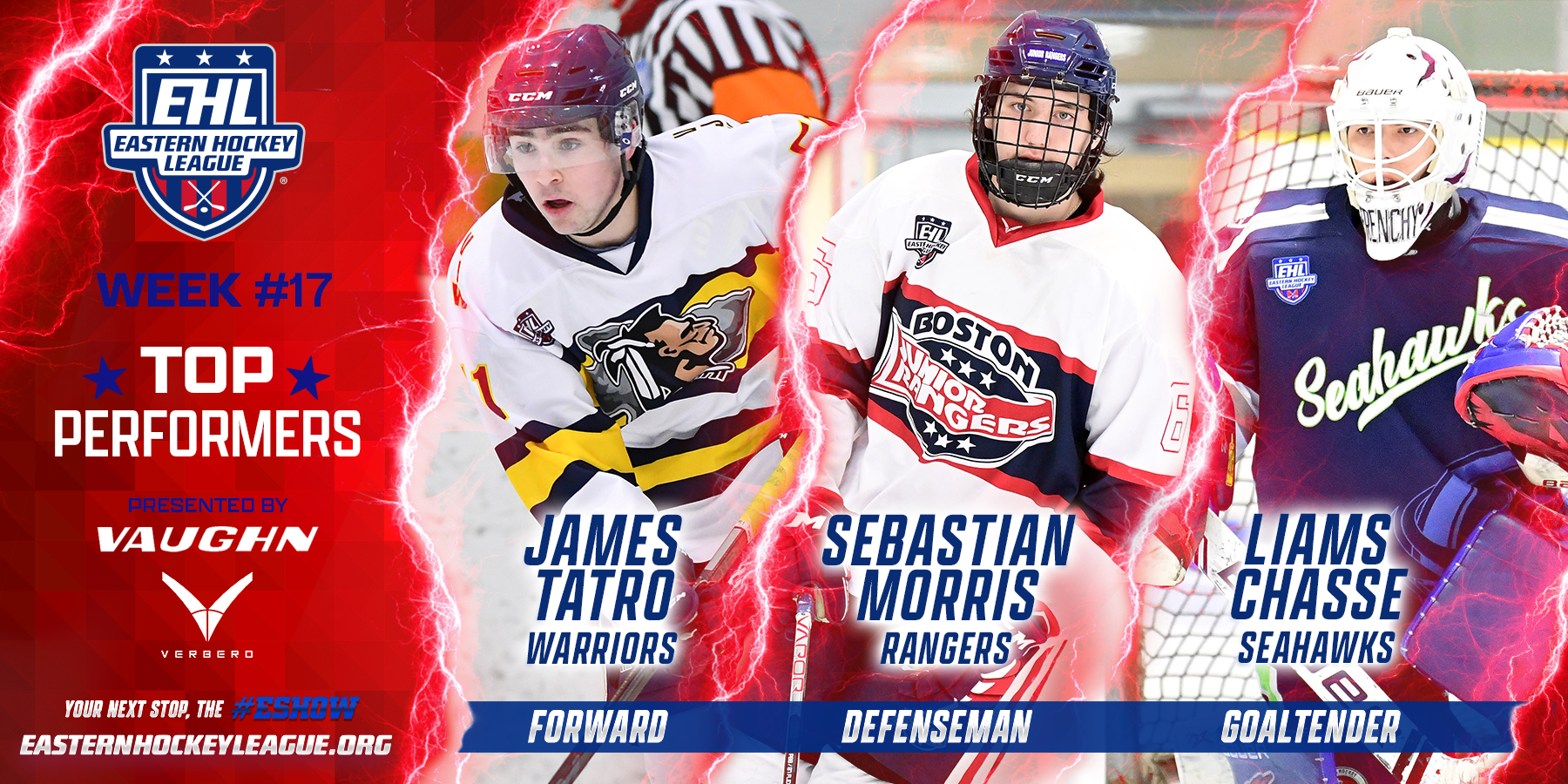