TEWKSBURY, MA -- Nathan Mueller, a goaltender for the Boston Jr Rangers, has committed to Babson College for the fall of 2022.

The '01 native of Rogers, MN is in his 2nd season with the Rangers, and this past Thursday, he set a new league record for All-Time Shutouts with the 14th of his Eastern Hockey League (EHL) career.

Overall, Mueller owns a career record of 43-6-1 throughout his time in the EHL, to go along with a 1.52 GAA and a .950 save percentage. The 2020-21 EHL Champion also has a shot at the All-Time Wins record, as he currently sits just eight victories behind Brendahn Brawley (51), a former netminder for the Philadelphia Little Flyers.

“There is not another goalie that I’ve seen communicate, play the puck, and control the flow of a game the way he can," said Rangers head coach and general manager Rich DeCaprio. "Nate is a tremendous competitor. He’s the best goalie in our league, in my opinion. Nate is also very academically motivated and having the opportunity to attend Babson is just the cherry on top of his junior career. We are very proud of him."

After joining the Rangers in mid-October of this past season, Mueller quickly established himself as the workhorse for the team, winning each of his first seven starts in net. The pace has not slowed down for a minute since then, and this was easily recognized with Mueller's All-Star Selection back in October. Mueller is beyond grateful that his career path took him to the EHL, and will continue forward at Babson in the fall.

“What I love about Babson is their tight-knit community,” said Mueller. “I chose Babson because it has an excellent academic program to go along with it’s top-end hockey program. I can’t express how much Coach DeCaprio has helped me throughout my journey to college. He has given me every opportunity to achieve what I have. I want to thank my goalie coach Bill Manuel and my teammates - I wouldn’t be where I am today without them.” 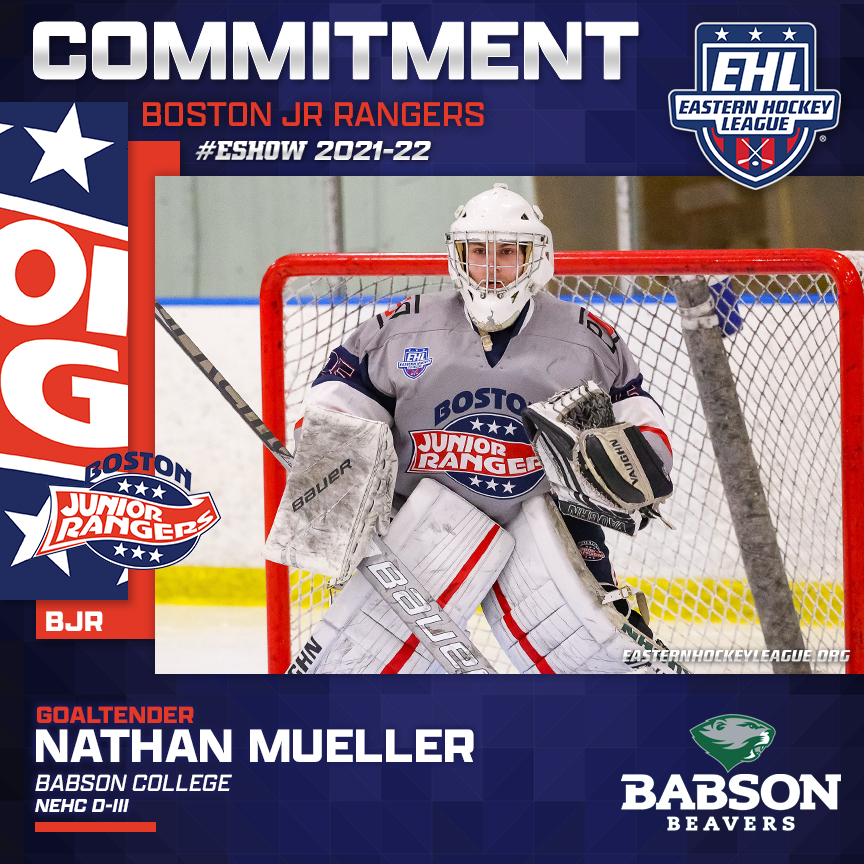