Below you'll find the 23rd set of weekly top performers in the #EShow. The forward and defensemen awards are presented by Verbero Hockey, while the goalie honors come courtesy of Vaughn Custom Sports.

Cullinan and the Rangers posted a record of 2-0-1 in their final three games of the regular season, and the five-point week helped Boston earn it's 2nd Regular Season Championship in franchise history. As for the '01 native of Sandy Hook, CT, Cullinan five points throughout the week, adding three goals and two assists to his totals for the year. Overall, Cullinan finishes the regular season with 27 points in 29 total games.

Now, looking forward, the top seed in the East Division has to wait for the conclusion of tomorrow's Play-In Game to find out who their opponent will be in the First Round of the EHL Playoffs. Tomorrow at 11:30 am, it will be the Valley Jr Warriors hosting the Seahawks Hockey Club, with the winner heading to Tewksbury, MA on Thursday for game #1 of the First Round series with Cullinan and the Rangers.

Conboy and the Apple Core split their final home-and-home series with the Connecticut RoughRiders to wrap up the 2021-22 regular season. The '01 native of New Fairfield, CT put together arguably his best two-game offensive stretch of the season, tallying three total goals to his credit during the series.

Now, coming up this week, the Apple Core captain will hope to lead his team to an upset victory in the First Round of the EHL Playoffs, as New York travels up to Worcester, MA for their best-of-three series with the Railers Jr Hockey Club.

Speaking of teams ending their regular season on a high note, Henson the Little Flyers did just that by winning all three of their games and clinching the #1 seed in the South Division standings. The '01 native of Troy, MI turned aside 109 of the 114 shots that were sent his way, improving his record up to 22-11-0 for the season, to go along with a 2.18 GAA and a .922 save percentage.

Henson played a pivotal role in his team winning 16 of their final 18 games of the season, en route to securing the top seed in the South via a tie-breaker over the New Jersey 87s. Now, starting this Thursday, Philadelphia will turn their attention towards the postseason and a First Round matchup with Team Maryland, who they owned a record of 4-2-2 against throughout the year.

Lee, McKay and the Little Flyers swept their two-game home series with the Connecticut Chiefs, improving their record up to 24-14-3 for the season. Keeping in line with their EHL team, Philadelphia has locked up the top seed in the South Division of the EHLP as well, securing themselves a First Round matchup with the New Jersey Renegades.

As for Lee and McKay, we start with the '03 forward from Aston, PA who simply went off this past weekend. Lee finished the two-game series with seven total points to his credit, featuring three goals and four assists, with one of his tallies coming in overtime on Sunday.

As for McKay on the blue, he wasn't far behind Lee, tallying five points of his own with a goal and four assists. Also an '03, the native of Glen Mills, PA forms an impressive pair with his offensive counterpart, and it's no surprise that each player is nominated as a candidate for more than one end of season award in the EHLP.

Wrapping things up in goal, Caruso and the Warriors split their weekend set of games, with the '02 native of Stoneham, MA appearing in both contests for his team. Caruso first came in relief against the Walpole Express on Saturday, stopping 11 of the 12 shots that he faced in a little over 27 minutes of action.

Fast forward to Sunday, and Caruso delivered arguably his best performance in a Warriors uniform, making 43 saves in a 4-1 statement victory over the Railers Jr Hockey Club. With a record of 22-17-2, Valley is locked into 3rd place in the North Division standings, which means they will be traveling to Burlington next week for their First Round matchup with the Vermont Lumberjacks. 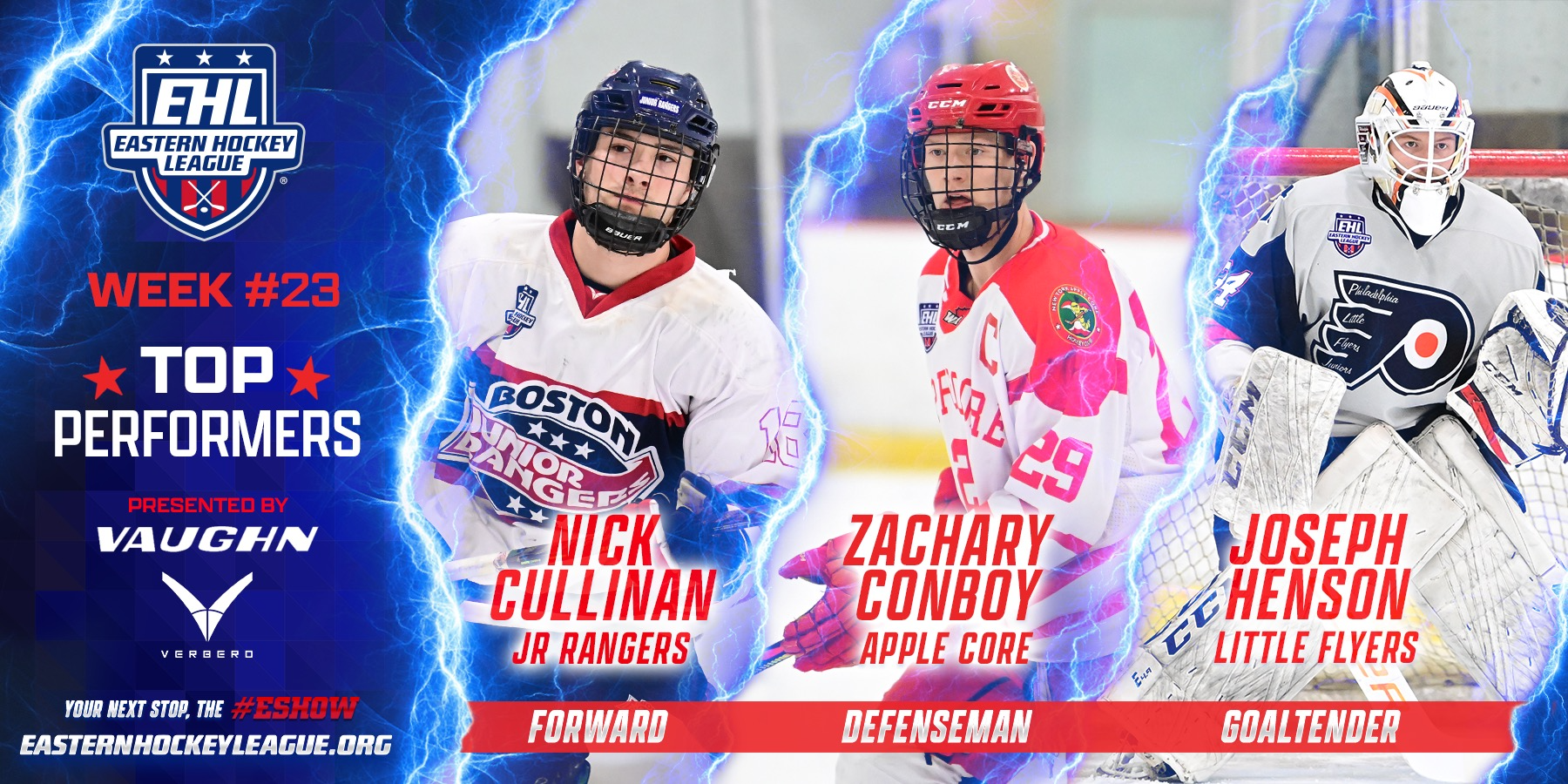 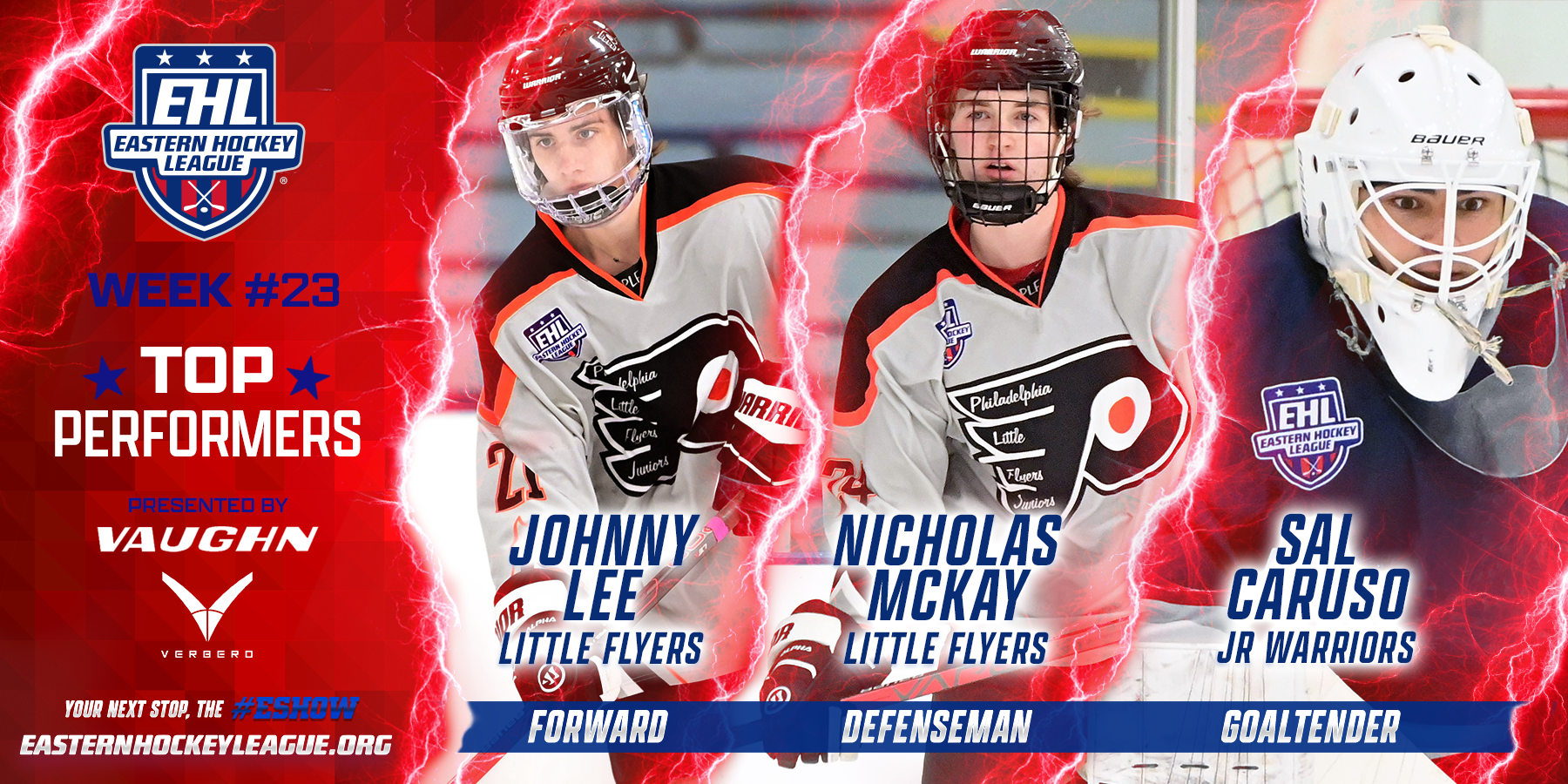