Below you'll find the 24th set of weekly top performers in the #EShow. The forward and defensemen awards are presented by Verbero Hockey, while the goalie honors come courtesy of Vaughn Custom Sports.

The EHL is pleased to announce that Kyle Dann (New Hampshire Avalanche), Matt Herrick (New Jersey 87s), and Jack Boschert (Walpole Express) have been named the Top Performers for Week #24.

Dann and the Avalanche earned some revenge this past week, by sweeping their two-game series with the Seacoast Spartans. The First Round victory comes a year after their North Division rivals completed the same feat against the Avalanche, this past March.

As for the '02 native of Windham, NH, Dann finished the series with four goals and an assist, including the overtime winner in game #2 that sent New Hampshire to the Second Round of the playoffs. Combined between regular season and postseason play, Dann now has 14 points in 28 total games, and that includes at least a point in five of his last six contests. Coming up next for Dann and the Avalanche, is a Second Round matchup with the New England Wolves, with a ticket to the 2022 Frozen Finals on the line.

Speaking of First Round sweeps, Herrick and the 87's followed suit in their 2-0 series victory over the Protec Jr Ducks in the South Division Semi-Finals. As for the '01 native of Jackson, NJ, and future defenseman at St. Anselm College, Herrick finished the series with a goal and three assists, increasing his overall total up to 38 points in 48 games to date.

Next up for the 87's captain and his teammates, the Finals in the South, and an ultimate showdown with arguably the hottest team in the EHL, the Philadelphia Little Flyers. The 2nd-year defenseman will look to have his team ready to go, as they seek to reach the Frozen Finals for the 2nd consecutive season.

Wrapping things up in goal, and while it wasn't a sweep for Boschert and the Express, it was still an epic series victory over the East Coast Wizards. You could also make the case that the series essentially went four games with game #2 ending in triple-overtime, following over 117 minutes of game action.

As for the '02 native of Florissant, MO, Boschert played all 237:37 of the series, racking up 141 total saves throughout that time. Boschert ended up getting the upper hand over Matt Gover from the Wizards, as the pair of netminders put on an absolute show throughout the grueling series. Coming up next for Walpole, the East Division Finals, and the challenge of taking on the defending EHL Champions, the Boston Jr Rangers.

Idland and the Renegades put a bow on their 2021-22 regular season schedule by sweeping their two-game set with the Connecticut Chiefs. As for the '02 native of Rockaway, NJ, Idland set the pace for his team offensively, finishing the two-game series with a trio of goals, including the game-winning tally in the opening contest. Tack on an additional assist for Idland, and his final total gives him 17 points in 41 total games in the regular season.

Coming up next for Idland the Renegades, is a First Round series matchup with the Philadelphia Little Flyers. New Jersey will be looking for a repeat performance out of Idland, as the seek to knock off the #1 overall seed in the South Division.

Abreu and the Railers hit the ice for a pair of games this past week, and earned themselves three out of a possible four points. The near-perfect week was just enough to surpass the Boston Jr Rangers by a point, and secure the top seed in the East Division Playoffs.

As for the native of Gloucester, MA, Abreu finished the week with a pair of goals plus a single assist, giving him 15 points in 25 total games to date this season. Combined between this year and last year, Abreu has tallied 30 points in 66 total EHLP games for the Railers. Now, looking ahead, the race for the top seed results in the Railers drawing a First Round matchup with the Walpole Express, which will begin on Friday evening in Worcester, MA.

Speaking of the Express, DiVola and his teammates earned a shutout in their final game of the regular season, knocking off the Seahawks Hockey Club by the final score of 3-0. The '03 native of Saugus, MA stopped all 45 shots that he faced, en route to his 7th victory of the season and 1st career shutout.

Looking ahead to the tall task coming up this week, DiVola and the Express can find confidence in having taken the Railers past regulation twice in the regular season. Also, in the 1st of those two contests, Walpole came away victorious, thanks to an overtime winner from Aidan Parker. The Express will need DiVola, Parker, and everybody else all on their 'A-game' in order to take down the Railers and move on to the East Division Finals. 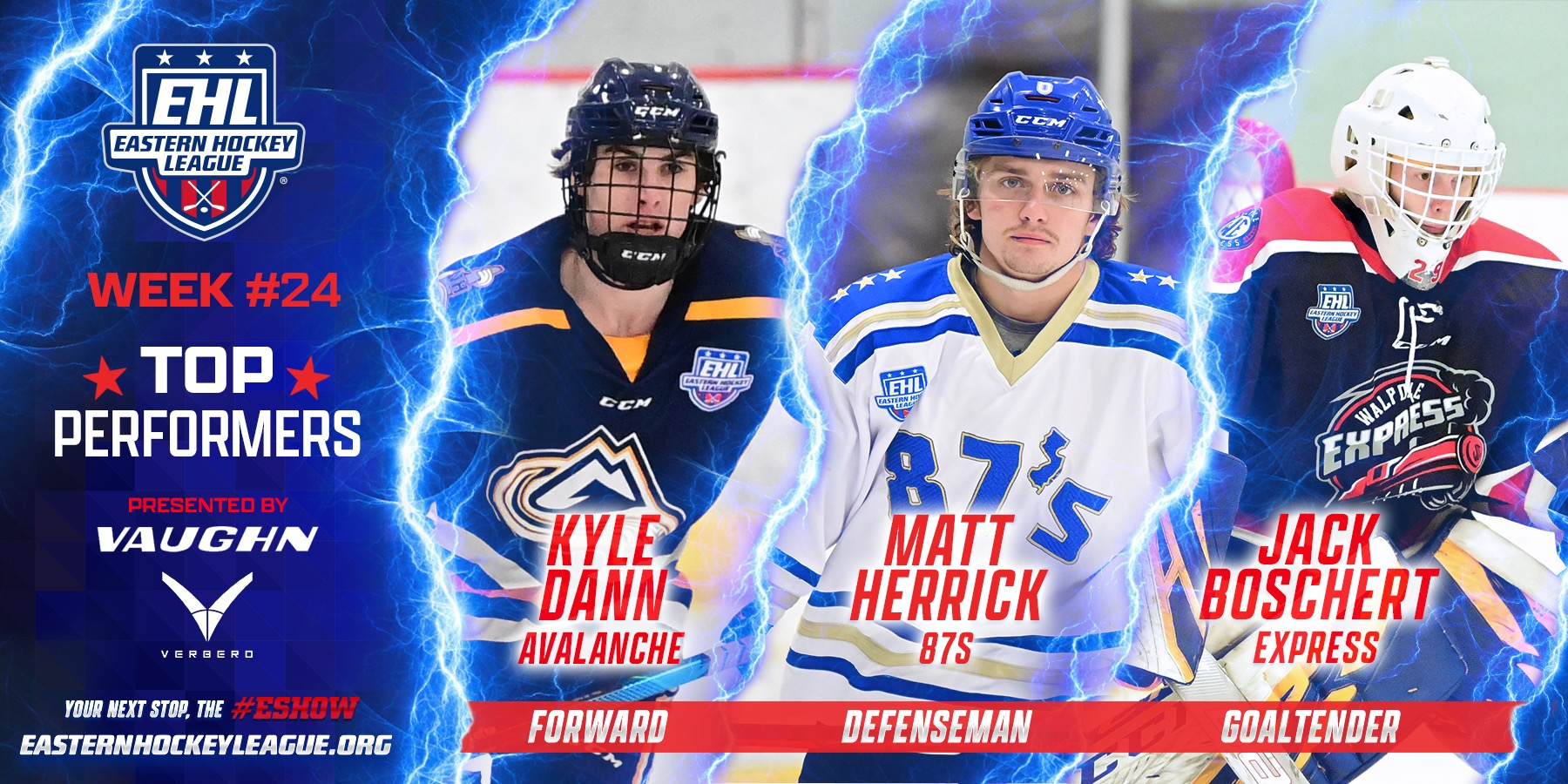 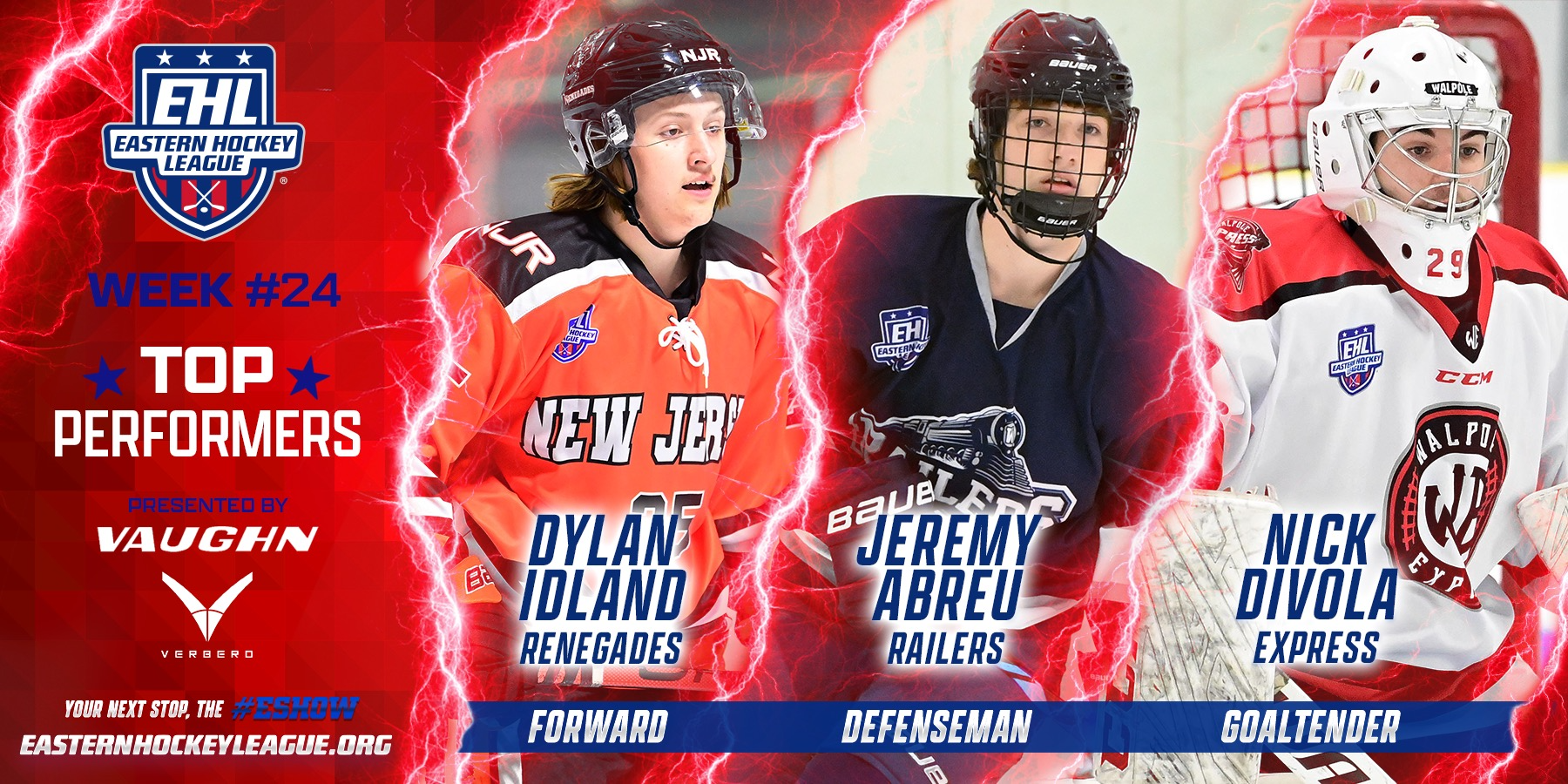