BOSTON, MA -- The Eastern Hockey League (EHL) is pleased to announce the addition of the Philadelphia Hockey Club (PHC) for the upcoming 2022-23 season. The new EHL franchise brings the total number of teams up to 19 in the league's top level, as PHC will be placed in the South Division that currently consists of the New Jersey 87's, the Philadelphia Little Flyers, the Protec Jr. Ducks, and Team Maryland. 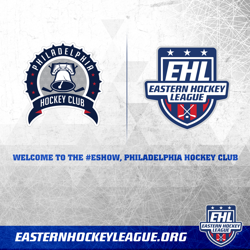 “We are thrilled to welcome Jim Mackey and his organization into the Eastern Hockey League," said Joe Bertagna, the Commissioner of the EHL. "He [Jim] adds to our already deep line-up of owners with unique resumes and experience in so many aspects of the game.”

PHC will skate out of the Hollydell Ice Arena, the franchise's home rink in Sewell, NJ.  After four seasons spent in the United States Premier Hockey League (USPHL), PHC is ready to make the jump to the EHL, the direct-to-college placement leader on the east coast. Over the course of their time in the USPHL, PHC helped over 25 players advance in their respective hockey careers.

"The Philadelphia Hockey Club is thrilled to join the Eastern Hockey League for the 2022-23 season," said Jim Mackey, the owner of the Philadelphia Hockey Club. "The league has a long history of operational excellence and player progression to the NCAA ranks. PHC is dedicated to the development and advancement of our players, and our membership in the EHL will facilitate those priorities."

As the team embarks on their first season in the EHL, they will be led by Jeff Perreault, who will serve has the Head Coach and General Manager of the program.

"It's an honor to have the opportunity to be a part of this league," said Perreault. "The entire PHC association is beyond excited to provide a top-notch EHL program and we look forward to being a top feeder organization for the NCAA level.”

Please join the EHL is officially welcoming the Philadelphia Hockey Club to the #EShow, and for those interested in joining the new program, reach out to Jeff Perreault at jperreault@hollydell.com.

Located in the Northeast and Mid-Atlantic regions of the United States, the Eastern Hockey League (EHL) and its 19 teams celebrates its 10th season in 2022-23. For the past six years, the EHL has finished as the leader in the Direct-To-College Advancement at the Division II and III levels. This past season alone, the EHL accounted for nearly 1 in every 5 freshmen on Division II and III rosters.

To go along with the NCAA Commitments, the EHL has also helped over 100 players work their way up the USA Hockey Ladder of Development to the North American Hockey League (NAHL) and the United States Hockey League (USHL). This area of advancement is also not limited to just players, as the EHL has seen a number of coaches make the jump up the ladder as well.