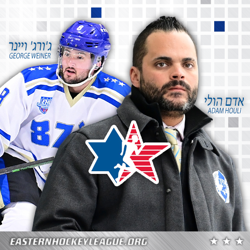 Adam Houli (right) and George Weiner (left) headline the list of EHL connections on this year's Team USA roster at the Maccabi Games.

At the top of the roster, and fresh off leading the New Jersey 87's to their first EHL Championship back in March, Adam Houli is an Assistant Coach for Team USA. Houli is working alongside head coach Michael Gershon, who serves as the Head Coach of Chatham University in the United Collegiate Hockey Conference (UCHC) back here in the states.

As for the players on the roster, the group includes five players with playing experience in the EHL, starting off with George Weiner, a two-year veteran for the 87's. Weiner helped to lead New Jersey to their first-ever EHL Frozen Finals appearance back in the 2020-21 season, and is now heading into his sophomore year at the Wentworth Institute of Technology.

Along with Weiner on the blue line is Max Roth, an alum of the Vermont Lumberjacks, where he spent the majority of his time developing over two seasons in the EHL, but also played a handful of games in the EHLP as well. Following his time in Burlington, Roth advanced to Worcester State University, where he just completed his senior season.

Around the same time Roth was in the EHL, so was Jarret Bovarnick, a '99 goaltender from Boca Raton, FL who played a season apiece for the Valley Jr. Warriors (2018-19) and the East Coast Wizards (2019-20). Bovarnick's time in the EHL also led him to the NCAA ranks, as he will enter his senior campaign at Suffolk University this fall.

Moving up front for the final two connections and we'll start with Brody Selman who served as the captain of the Protec Jr. Ducks during the program's inaugural 2020-21 season. Selman posted 40 points combined that year between the regular season and the postseason.

Last, but not least, Michael Gennello wraps up the list of connections on the roster, as the New Jersey native skated for the Connecticut Nighthawks back in the 2015-16 season.

Maccabi Ice Hockey athletes and coaches represent NCAA Division I and III, ACHA, and junior hockey clubs while competing in for the USA delegation in Israel.

These games bring players and their families from all over the world.

The games project to host over 10,000 athletes from over 75 countries, with the USA delegation representing over 1,200 team members. The USA ice hockey teams will compete with athletes from Canada, Israel, and Europe.