Pair of 87's All-Stars Set to Join Corsairs this Fall

WALL TOWNSHIP, NJ -- Matthew Zdanowicz and James Mettler, from the New Jersey 87's, have committed to UMass Dartmouth (UMD) for the fall of 2022.

Zdanowicz, the '01 native of Lyndhurst, NJ, spent two seasons with the 87's, as the forward tallied 67 career points over the course of 66 total games in the Eastern Hockey League (EHL).

Mettler also played out a pair of years in the EHL, starting out with the New York Apple Core, before heading slightly south to join the 87's this past January. As for the defenseman's point production, Mettler was amongst the best in league during his time, collecting 42 points in 52 total games.

“Zdanowicz came to us last year in a crazy year, a COVID year, where there was a lot of trickle down," said 87's head coach and general manager Adam Houli. "He acclimated pretty quickly and we knew he was going to be in for a strong year. It was a matter of him being excited to be back in New Jersey, and then he really took the ball and ran with it. As for Jimmy, he is a player, from our standpoint, we were frankly growing tired of playing against. He did a lot of the things that we love with our defense, so he was a player we had always wanted to see in the blue and gold. When we had the opportunity to make it happen, there was no hesitation. Overall, he and Matt were both vital to our championship run this year and now they take that experience with them to an excellent program in UMass Dartmouth.”

Zdanowicz and Mettler are part of a very strong group of incoming freshmen heading off to UMD this fall, of which there are six other players from around the EHL. The pair of 87's will become new teammates with John (Pat) Aalto of the East Coast Wizards, Brandon Clark of the Vermont Lumberjacks, Kevin Johnston of the New England Wolves, Marshall McKallip of the Connecticut Chiefs, Alex Newton of Team Maryland, and Vincent Nicosia of the Philadelphia Little Flyers, when they arrive on campus.

“To secure a commitment to UMD means a lot to me and my family,” said Zdanowicz. “It's a great school with great opportunities and not just academically, but with the next chapter of my hockey career as well; it will be an experience and a lot of fun to look forward to.”

Mettler added, “It means a lot to me to commit to such a good program as UMD, obviously that's the goal the whole year trying to get to that next level, and I'm excited for the next four years.”

Following his impressive showing in the 2020-21 season, Zdanowicz followed up with an even better 2021-22 season, proving to be one of the top offensive players for the 87’s while averaging just over a point per game. He is also the team’s all-time leader in postseason points with 17, of which, 15 of those came in the 2022 playoffs.

Houli added about Zdanowicz, “He did everything that we had asked of him, and when he was on, he was honestly one of the best players out there on the ice no matter who we were playing. He was just so dominant in his skating that I think he will flourish in the college game, and I wouldn’t be surprised if we see him go on past that.”

The veteran forward who played for Team EHL during the College Series last October reflected on his time with the 87’s, including their bounce-back this season, turning an eight-game losing streak into a championship run.

“At the 87s we had a bumpy road at one point, and even though we struggled together, we found a way to change a terrible outcome into something I will never forget. This is just one example of the many this program will teach you: that if you put in the time as we all did, we will deserve what was ahead,” added Zdanowicz.

As for Mettler, his 2021-22 campaign got off to a fast start that was quickly recognized with a selection to the inaugural EHL All-Star Classic. Following a great first half of the year, the move took place, and upon his arrival in New Jersey he was mainly paired with the Matt Herrick, and the duo quickly established themselves as one of the more dominant defensive units in the EHL.

“When he joined us, I think that’s when we all realized as a group, we now have a championship-level team and that we could make a run for the EHL title,” added Houli.

Mettler spoke about his time with the 87’s and the seamless transition he made after being traded from New York.

“I couldn't have asked for a better time with the 87's. Playing against them you don't really know what to expect when you join them, but every guy took me in this year and I can't thank my teammates enough for that, and for making me feel so welcome even on day one,” added Mettler. “To have a coaching staff like the 87's this year was incredible; very supportive, very helpful and really tried to develop your game every single day.” 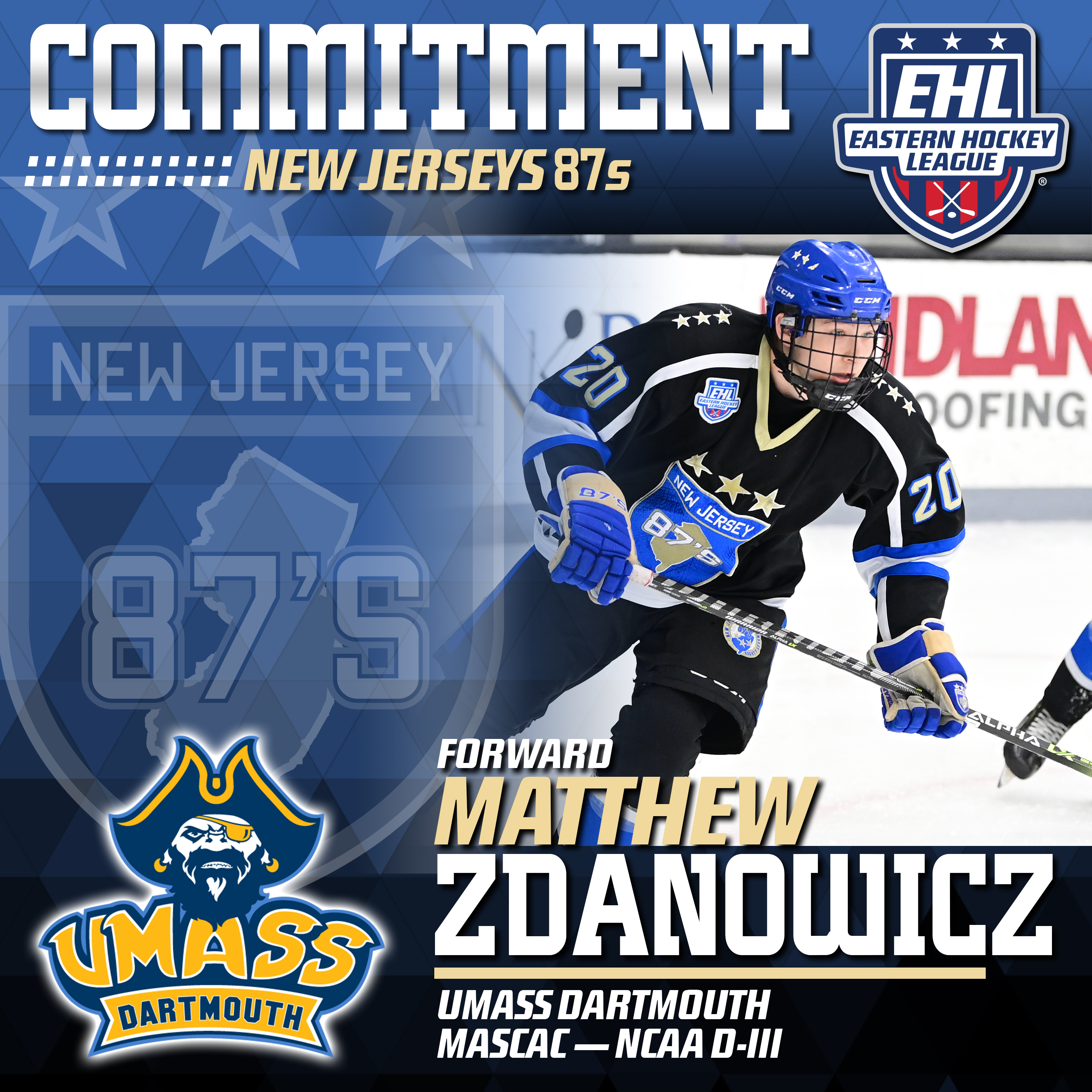 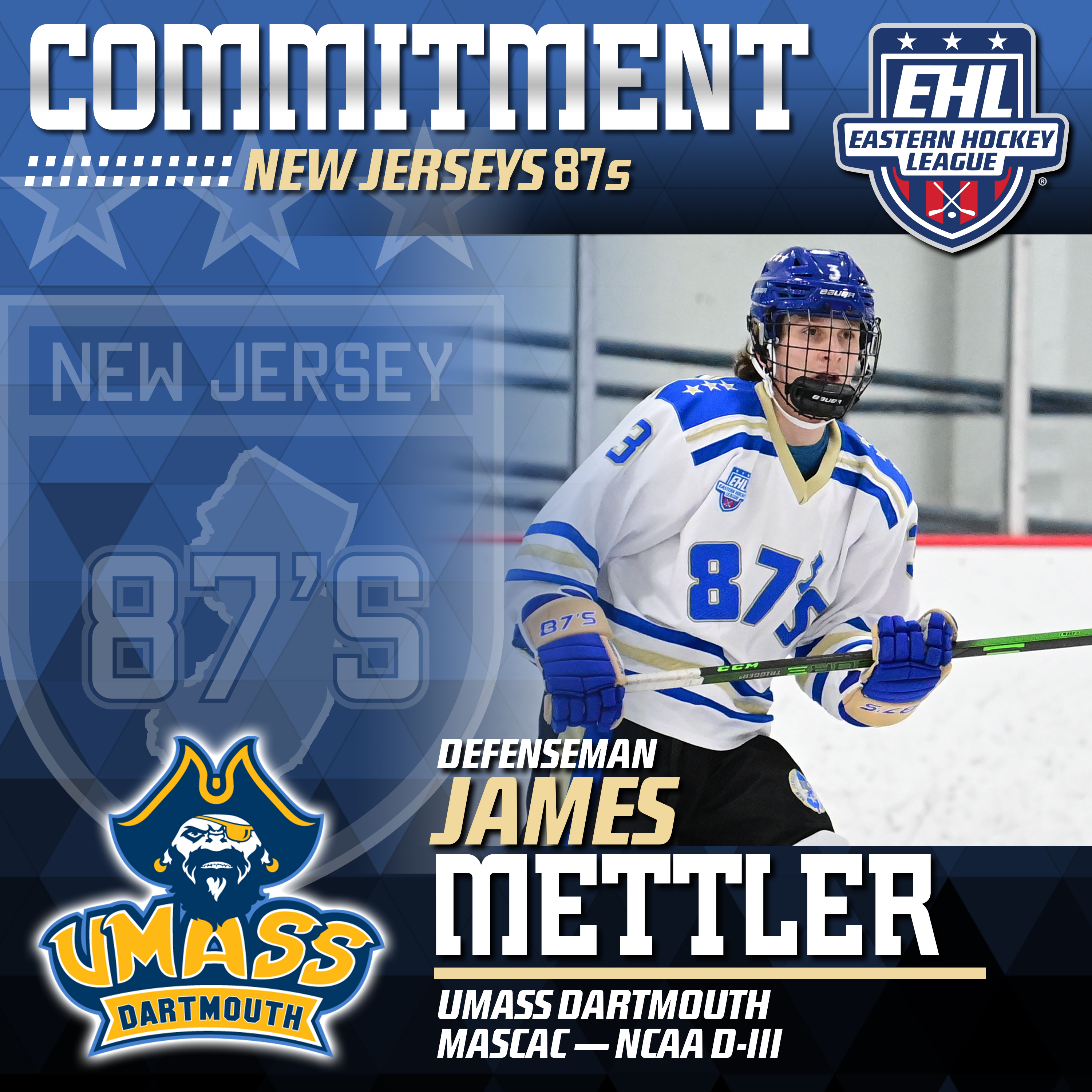