In addition, Ryan Durocher and Zach Lubinski, a pair of alumni coaches for the New England Wolves, have each also taken the next step in their respective coaching journeys.

Starting off with Caligiuri, the 2019-20 EHLP Coach of the Year led the Avalanche to back-to-back EHLP Regular Season Championships (2020-21 and 2021-22), and had his team in overtime of this past year's title game in Providence, RI. Caligiuri also served as an assistant coach for the Avalanche team in the EHL, and he's now off to become the Director of Hockey Operations at Princeton University in the ECAC (Division I).

"My time working in the EHL and EHLP was phenomenal, and truly, a great learning experience," said Caligiuri. "The league has a clear understanding of its goals of development and advancement for both its players and staff members, and continues to improve with each and every year. The league pushes everyone to elevate what their full potential may be and continues to raise the bar. I’m thankful for the opportunity I had to work with such great hockey minds and will always reflect back on my time with the New Hampshire Avalanche and in the Eastern Hockey League."

Going back to the Championship Game that was mentioned above, Michael Grace was victorious on the other side of the extra frame, leading the Boston Jr. Rangers to their 3rd EHLP title. Grace also served as an Assistant Coach for his program's EHL team, and spent the 2020-21 campaign as an Assistant Coach with the the Railers Jr. Hockey Club. Now, coming up this season, Grace heads back to his home state of New York to become an Assistant Coach for Elmira College in the United Collegiate Hockey Conference (UCHC - Division III).

"I would like to thank the Boston Junior Rangers, Worcester Railers, and EHL for providing me the opportunity to learn and grow as a coach," said Grace. "The EHL has identified the perfect model for age-out players looking to move to the NCAA DIII level, while creating an ideal environment for younger players to develop their skills whether it be the EHL or EHLP. I look forward to continuing many of the great relationships with the league’s coaches and staff during my new journey with Elmira College."

To wrap-up the latest wave for past coaches working their way up the ladder, Durocher and Lubinski each spent previous years with the New England Wolves program.

Durocher coached with the Wolves back in their inaugural EHL season (2014-15), and has since gone on to stops in professional hockey, the USHL, and NCAA Division I hockey. This upcoming year, he has been hired as the Director of Hockey Operations at Colorado College.

As for Lubinski, he spent two seasons with the Wolves, both in Waterville Valley and in Laconia from 2015-2017. This past summer he was hired at his alma mater, Southern New Hampshire University (SNHU), as the new assistant coach under Sean Walsh.

This class of four coaches joins the previous announced list that includes Jim Mosso, Josh Holmstrom, and Gary Gill, further proving that the EHL and EHLP provide a great platform for both players and coaches to develop and prepare themselves for the next level. 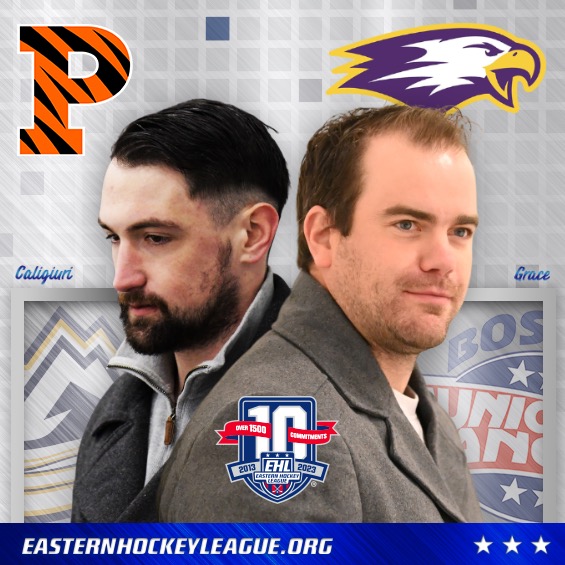