Below you'll find the 1st set of weekly top performers for the 2022-23 season. The forward and defensemen awards are presented by Verbero Hockey, while the goalie honors come courtesy of Vaughn Custom Sports.

The EHL is pleased to announce that Oliver King (HC Rhode Island), Nick Demio (New England Wolves), and Adam Yost (Connecticut Chiefs) have been named the Top Performers for Week #1.

King and HC Rhode Island kicked-off their inaugural season in the EHL in grand fashion, sweeping their weekend home-and-home series against the East Coast Wizards. Rhode Island began the year on the road this past Friday, jumping out in front by a pair of goals, and then holding on for a 2-1 victory in Bedford. MA. Fast-forward to Saturday, the home opener for Rhode Island, and it was a night to remember as the home team erased a 3-1 deficit en route to a 5-4 victory in overtime.

As for the '03 native of Cambridge, MA, King scored both goals in the opener on Friday, and then added a 3rd tally to his credit on Saturday night. At 2-0-0, King and his Rhode Island teammates couldn't have asked for a better start to the season, as they will look to keep things rolling with showcase matchups coming up this week against the Boston Jr. Rangers, Seahawks Hockey Club, and Wolves.

Speaking of the Wolves, and keeping with the trend of teams that swept their opening set of games, New England won both of their home contests this past weekend by way of the shutout. Kicking off their season on Saturday, the Wolves knocked off the Seacoast Spartans by the score of 3-0, and then they made it a perfect weekend with a 5-0 shutout over the Express Hockey Club on Sunday.

As for the Demio, the '02 native of Duxbury set the pace for his team on the back end, collecting a goal plus a pair of assists to his credit. After tallying five points throughout the entire 2021-22 season, it's safe to say that Demio will surely surpass last year's total very early on in his age-out campaign. As for this week's upcoming showcase, Demio and the Wolves are set to hit the ice against the Protec Jr. Ducks and the New Jersey 87's, to go along with their matchup against Rhode Island.

Wrapping things up in goal, and sticking with the theme of 2-0-0 records, that's where Yost's mark stands after leading the Chiefs to a home-and-home sweep of the rival Connecticut RoughRiders. The '02 native of Canton, MI was stellar over the course of the two-game series, turning aside 68 of the 72 total shots that faced, which was good for a .944 save percentage.

Looking forward to this week in Worcester, Yost will look to keep things rolling as the Chiefs take on the Express on Thursday, Team Maryland on Friday, and the Seahawks on Saturday.

The EHLP is pleased to announce that Peppi Delliquadri (Vermont Lumberjacks), Dyland Cornatzer (New Jersey 87's), and Nick Piazza (Express Hockey Club) have been named the Top Performers for Week #1.

Delliquadri and the Lumberjacks got off to a hot start in their 2022-23 campaign, sweeping their weekend series with the Adirondack Jr. Thunder by scores of 6-2 and 5-4. As for Delliquadri, the '04 native of Lake Placid, NY, didn't look like a 'rookie' in the first two junior hockey games of his career. Over the course of the weekend, Delliquadri tallied five total points to his credit with a pair goals to go along with a trio of assists.

After reaching the Frozen Finals for the second straight season this past year, the Lumberjacks appear to be reloaded and revamped for yet another run at the EHLP level. With Delliquadri helping to lead the way, Vermont will head to Worcester for showcase matchups against the Connecticut Chiefs, New Jersey Renegades, and Pennsylvania Huntsmen later this week.

At 2-0-0, Cornatzer and the 87's are set for a big showcase week, as they will take on the Seahawks Hockey Club on Friday, the New Hampshire Avalanche on Saturday, and the Valley Jr. Warriors on Sunday.

Capping off the first set of stars of the week, Piazza and the Express hit the ice for just a single game this past weekend, but they made it count by knocking off the Railers Jr. Hockey Club in season opener for both teams this past Saturday.

The '03 native of Attleboro, MA got the nod in net, and he didn't disappoint, turning aside 33 of the 34 shots that were sent his way. The stellar performance was good for a .971 save percentage, and sets the table for hopefully an exciting year in Walpole for the Express EHLP team. 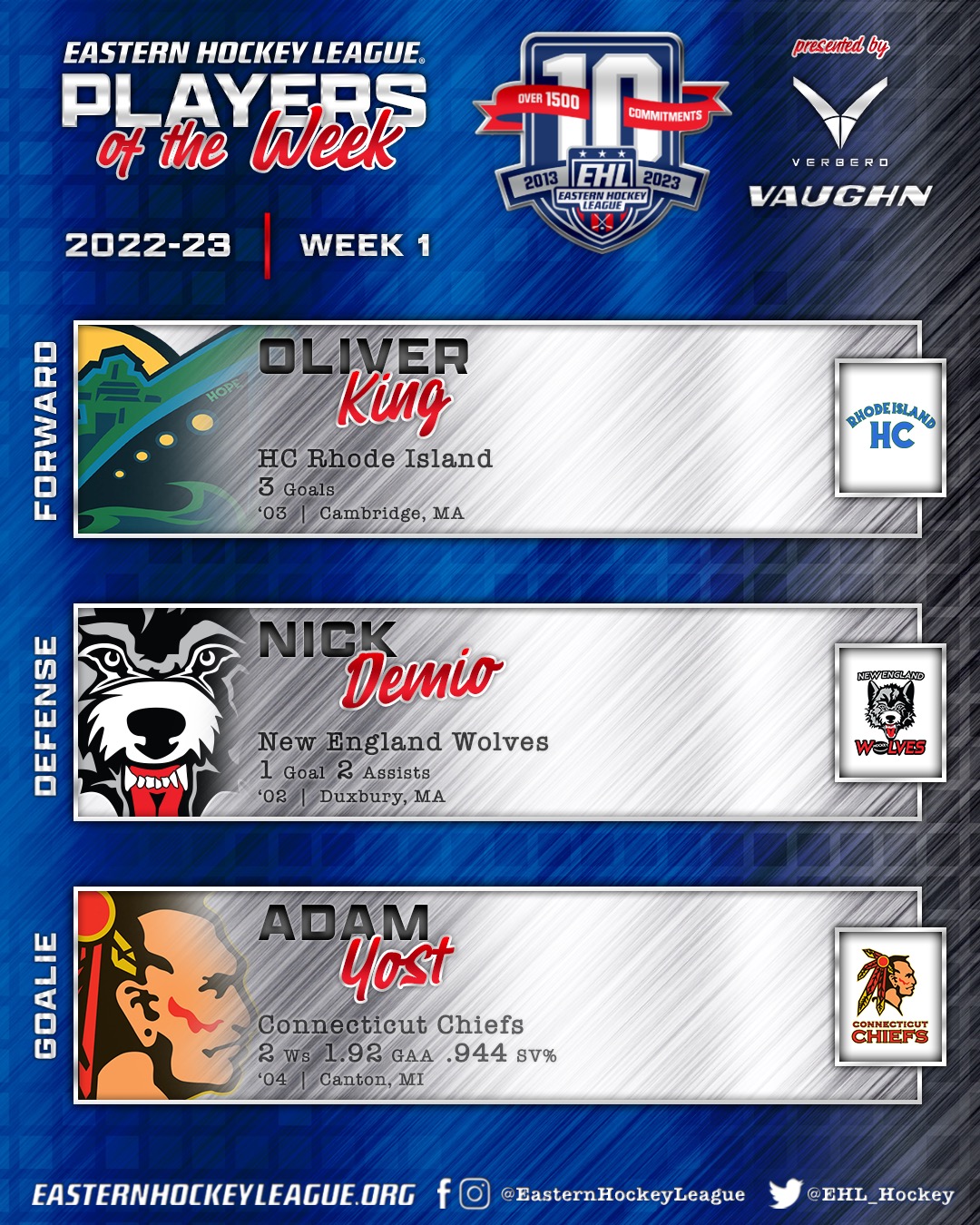 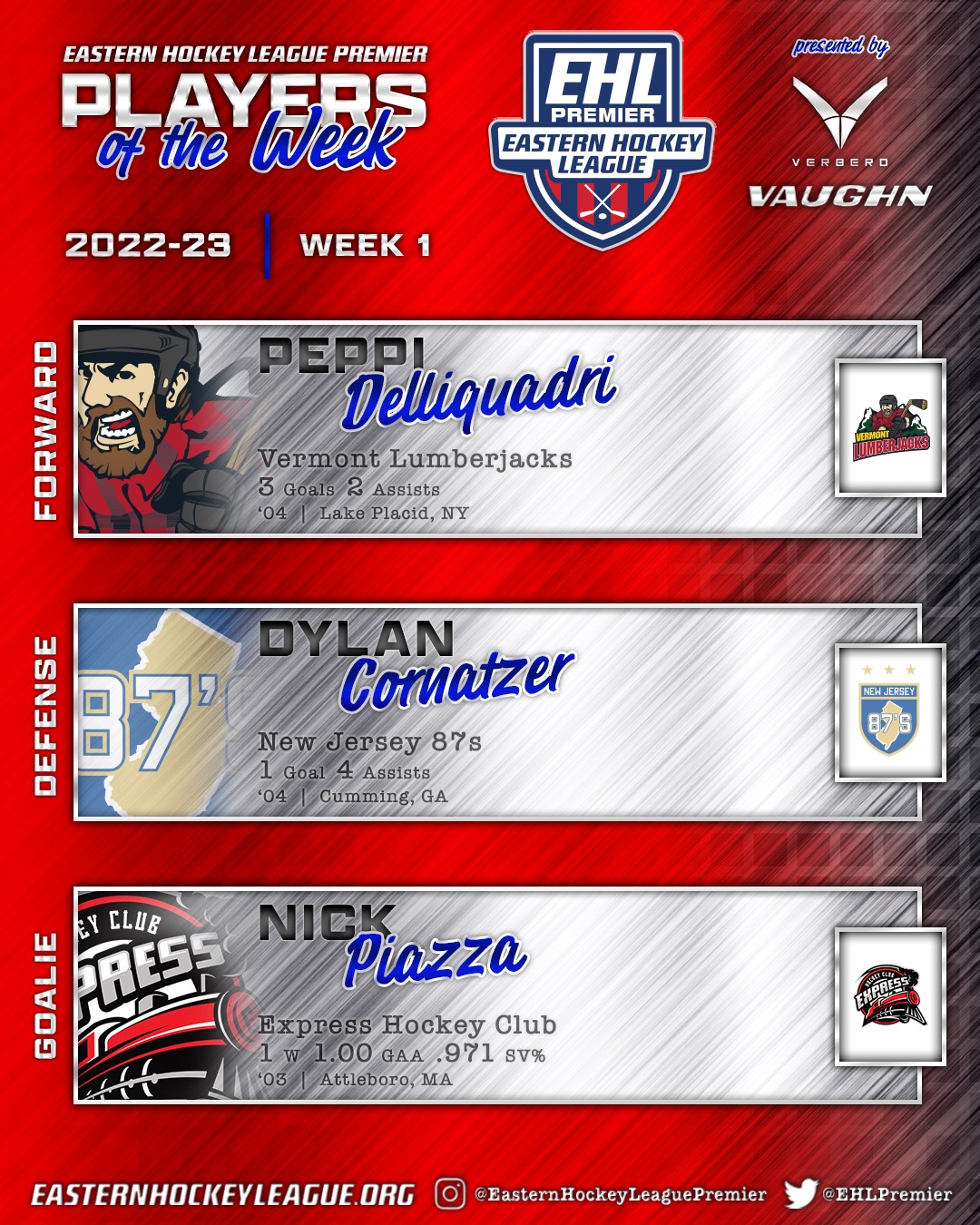