Below you'll find the 2nd set of weekly top performers for the 2022-23 season. The forward and defensemen awards are presented by Verbero Hockey, while the goalie honors come courtesy of Vaughn Custom Sports.

The EHL is pleased to announce that William Pray (Seacoast Spartans), Patrick McKiernan (New Hampshire Avalanche), and Aidan Weller (Protec Jr. Ducks) have been named the Top Performers for Week #2.

Pray and the Spartans won all three of their games at the Worcester Showcase, posting 17 total games over the course of the weekend. After being shutout by the New England Wolves in the season open back on September 17th, Seacoast proved just how lethal their offense really can be, at the first league-wide event of the season.

As for the '02 native of Wheaton, IL, Pray played a role in eight of the 17 total goals his team racked up, scoring four times to go along with four assists. It's also worth pointing out that two of Pray's four goals stood as game-winning tallies in his team's victories over the Philadelphia Little Flyers and the Connecticut RoughRiders. After posting 48 points in 48 total games this past season, Pray is well on his way to setting new career highs in his age-out campaign.

Moving back to the blue line, but sticking in the North Division, McKiernan and the Avalanche won back of their games at the Worcester Showcase, improving the team's record up to 3-0-0 for the season. As for the '03 native of Weston, CT, McKiernan picked up a goal and an assist in both contests, helping New Hampshire earn victories over the RoughRiders and the Boston Jr. Rangers.

Coming up next for McKiernan and the Avalanche are another pair of road games, as New Hampshire heads to Burlington, VT for a pair of early-season showdowns with the Vermont Lumberjacks.

Wrapping things up with a goalie from the South, Weller and the Ducks won two of their three games this past weekend, with the '03 native of Charlotte, NC racking up 70 saves along the way. The four-point weekend for Protec propelled the team into 1st place, in a division that was arguably the toughest throughout the 2021-22 season.

Coming up next for Weller and the Ducks is a home-and-home series this Thursday and Friday against the RoughRiders.

The EHLP is pleased to announce that FX Marois (Vermont Lumberjacks), Samuel Hall (Express Hockey Club), and Alex Gerard (New Hampshire Avalanche) have been named the Top Performers for Week #2.

Marois joined the rest of the league in Worcester, and put on a show over the course of their three games. Combining Vermont's wins over the Connecticut Chiefs, New Jersey Renegades, and Pennsylvania Huntsmen together, and the Lumberjacks outscored their opponents 21-3 along the way. Vermont is now a perfect 5-0-0 for the year, with a league-leading 32 goals scored.

As for the '03 native of Canada, after posting just a single point in his team's opening weekend sweep of the Adirondack Jr. Thunder, Marois exploded at the showcase this past weekend, tallying nine total points which included six goals to his credit. Coming up this weekend, Marois and the Lumberjacks will host the Avalanche for a pair of home matchups, meeting up for the first time since the two North Division rivals faced-off on the final day of the Round Robin at the 2022 Frozen Finals.

Shifting back to the blue line, and sticking with the trend of teams that posted a 3-0-0 record this past weekend. Hall and the Express took care of business in their matchups against the Renegades, Huntsmen, and Union Jr. Thunder. As for the '06 native of East Bridgewater, MA, Hall tallied three points to his credit, including the game-winning goal against Union on Sunday.

With five points to his name so far this season, Hall is playing way older than his age, despite being one of the youngest players in the EHLP. Coming up next for Hall and the Express, a Friday night showdown with the Seahawks Hockey Club, followed by a home-and-home series with the Railers Jr. Hockey Club.

Putting a bow on things in goal, Gerard and the Avalanche won two of their three contests over the course of the weekend, all while collecting five out of possible six total points. As for the '04 native of Waterford, NY, Gerard was in net for each victory, turning aside all 30 shots he faced en route to a shutout over the Valley Jr. Warriors, which was followed up by a 20-save victory over the New Jersey 87's.

As mentioned above Marois, next up for Gerard and the Avalanche is huge trip North, for an early-season showdown with the Lumberjacks. Vermont has gotten the upper hand in the Second Round of the EHLP Playoffs each of the past two seasons, but it was the Avalanche who turned the tables on their rival in Providence this past March. 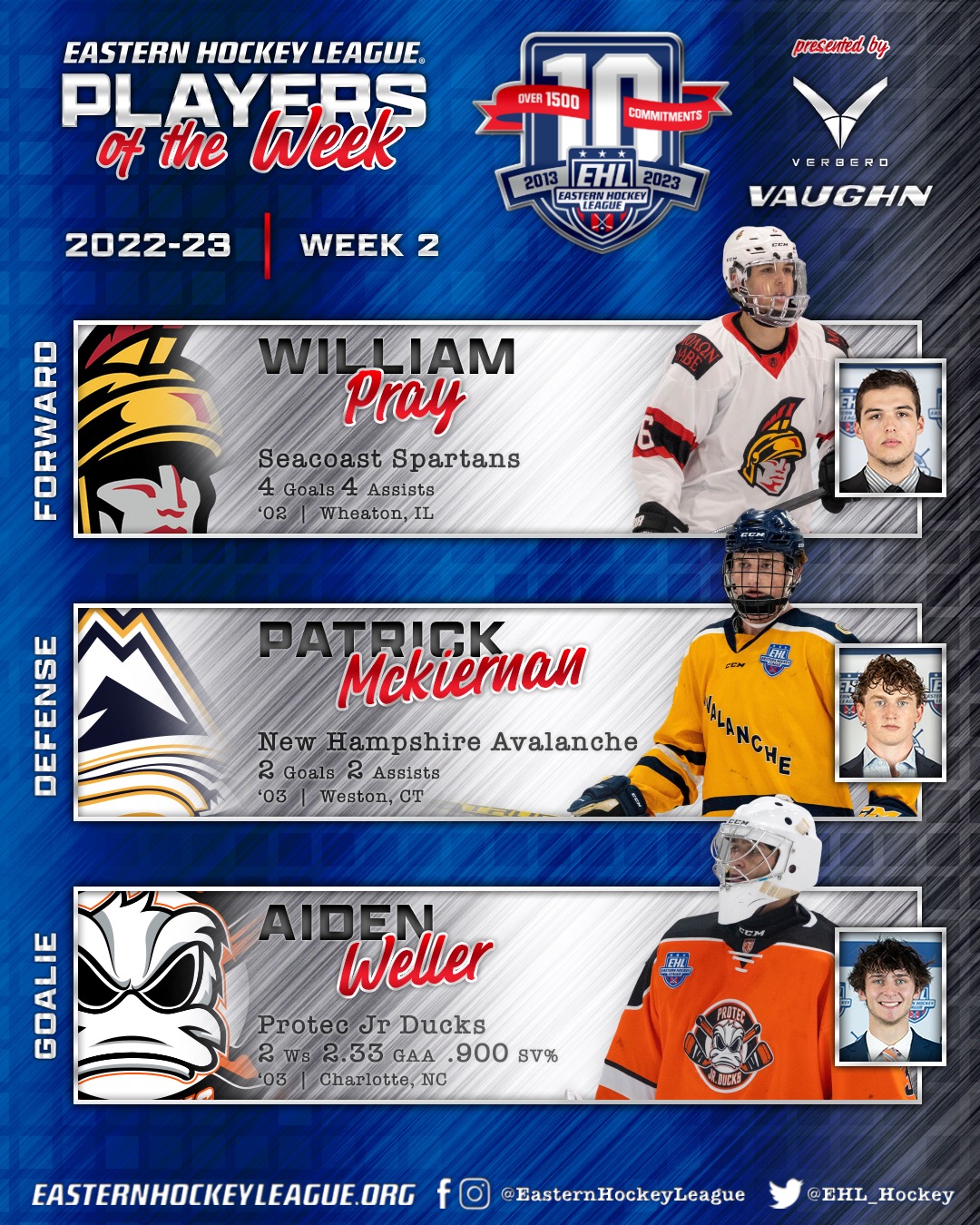 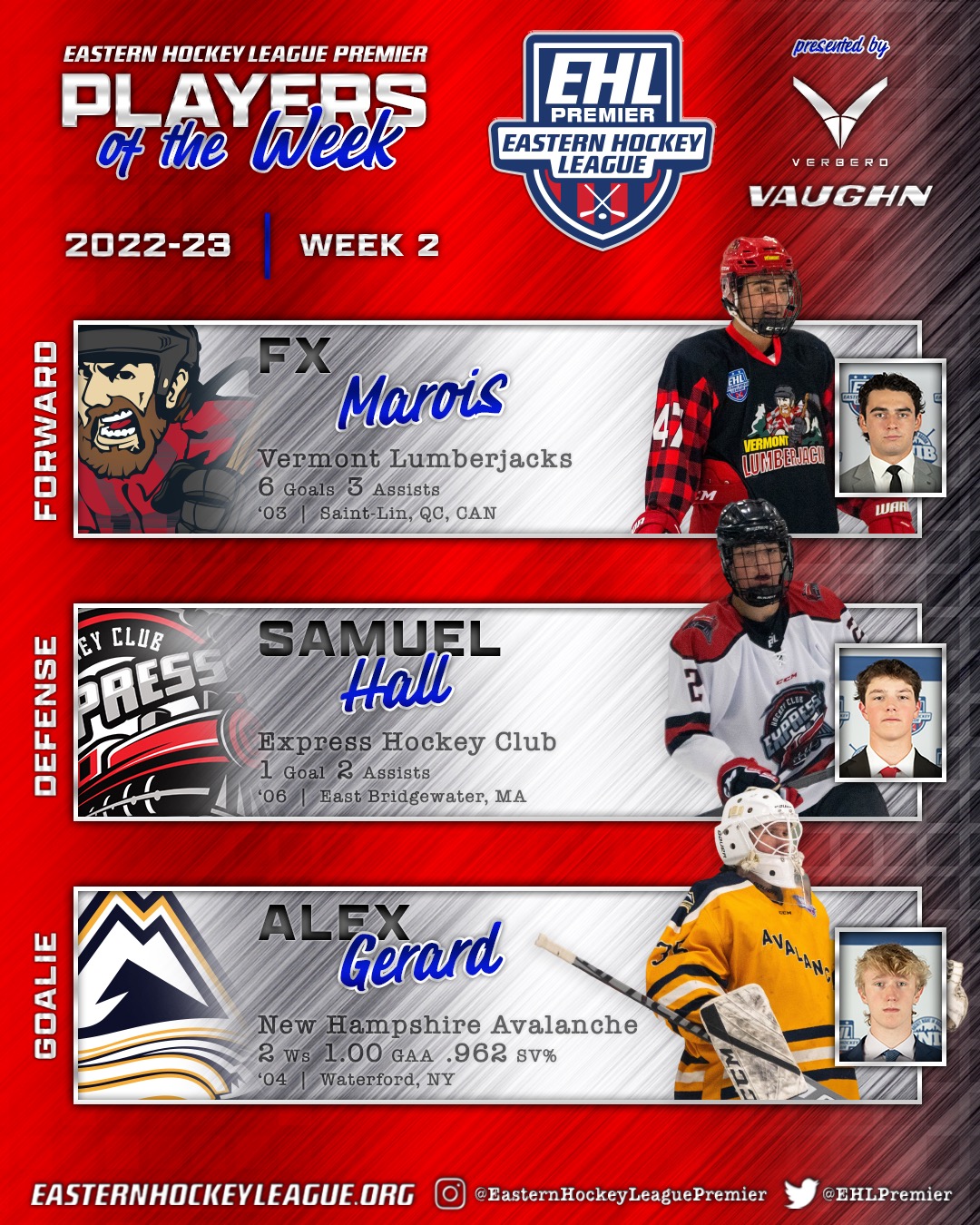