Below you'll find the 3rd set of weekly top performers for the 2022-23 season. The forward and defensemen awards are presented by Verbero Hockey, while the goalie honors come courtesy of Vaughn Custom Sports.

The EHL is pleased to announce that Luke Morrisette (Boston Jr. Rangers), Jeremiah Snyder (Seacoast Spartans), and Collin Berke (Team Maryland) have been named the Top Performers for Week #3.

Morrisette and the Rangers picked up their first two wins of the season this past weekend, knocking off the Valley Jr. Warriors by the score of 4-3 on Friday night, followed up by a 5-0 'revenge' shutout over HC Rhode Island on Saturday night.

As for the '02 native of Arden Hills, MN, Morrisette tallied five total points over the course of the weekend, including a hat-trick against Rhode Island on Saturday. For the year, the 6'4 forward now has an even six points in six total games to date. Coming up this week, Morrisette and the Rangers face-off against the Railers Jr. Hockey Club on Tuesday, as well as matchups against the New England Wolves and Connecticut Chiefs at the North Mini-Showcase at the Ice Den Arena on Sunday and Monday.

Speaking of teams that swept the weekend, Snyder and the Spartans did exactly that, earning victories in both ends of their home-and-home series with the East Coast Wizards on Thursday and Friday. Seacoast has now won five straight games since being shutout by the Wolves in their season opener.

As for the '03 native Dubuque, IA, Snyder doubled-up his season total for points, adding four assists to his credit. Overall, the steady defenseman now has eight points (1G, 7A) in six total games to date. Coming up this week for Snyder and the Spartans have a road matchup with Rhode Island on Wednesday, followed up by Mini-Showcase games against the Seahawks Hockey Club and Vermont Lumberjacks on Sunday and Monday.

Wrapping things up in goal, Berke and his Maryland teammates only hit the ice for a single game this past week, but they made it count by earning a 2-1 victory over the Philadelphia Hockey Club. The '02 native of Crofton, MD got the nod in goal, and made 38 saves en route to his 2nd victory of the year. Berke's record now stands at a perfect 2-0-0 to go along with a 1.64 GAA and a .960 save percentage.

As for Team Maryland's upcoming schedule, they will be heading to Hollydell Ice Arena on Friday and Saturday, for matchups with the New Jersey 87's and the Protec Jr. Ducks at the South Mini-Showcase.

Arendes and the Huntsmen returned the ice in emphatic fashion, sweeping their weekend set of games by earning wins over the Philadelphia Little Flyers, Union Jr. Thunder, and New Jersey Renegades. As for the '04 native of Gambrills, MD, Arendes tallied nine total points over the course of the weekend, adding five goals and four assists to his season totals. It's also worth pointing out that two of the five goals that Arendes scored for his team, stood as respective game-winners in each contest. For the year, the young forward now has 13 points in six total games to date.

Coming up this weekend, Arendes and the Huntsmen are set for a pair of rematches, as they play host to Union on Friday, followed up by a road matchup with the Renegades on Saturday.

Continuing on with Hunter and the 87's, this past weekend was an even split for New Jersey, as they beat the Connecticut Chiefs by the score of 4-3 on Saturday and then fell to the Little Flyers by a 7-5 margin on Sunday. As for the '03 native of Arlington, VA, Hunter scored the game-winning goal against the Chiefs, and then picked up his 4th and 5th assists of the season on Sunday night against Philadelphia. For the year, Hunter now has six points in seven total games to date.

With a record of 5-2 that puts the 87's at the top of the Mid-Atlantic Division standings, Hunter and the 87's return to action this weekend when they host the Adirondack Jr. Thunder at Jersey Shore Arena on Saturday and Sunday.

Last, but not least, Healey and the Railers won two of their three games this past week, but also earned a point in their overtime loss to the Seahawks Hockey Club. As for the two victories, each win was via a shutout over the Express Hockey Club, this past Saturday and Sunday.

Healey entered the game in relief against the Seahawks on Wednesday, helping to force the game to overtime and thus earning a point for the Railers. He then drew the start in the next game, pitching a 22-save shutout against the Express on Saturday. For the season, Healey now owns a record of 3-0-1 to go along with a 1.21 GAA and a .948 save percentage. 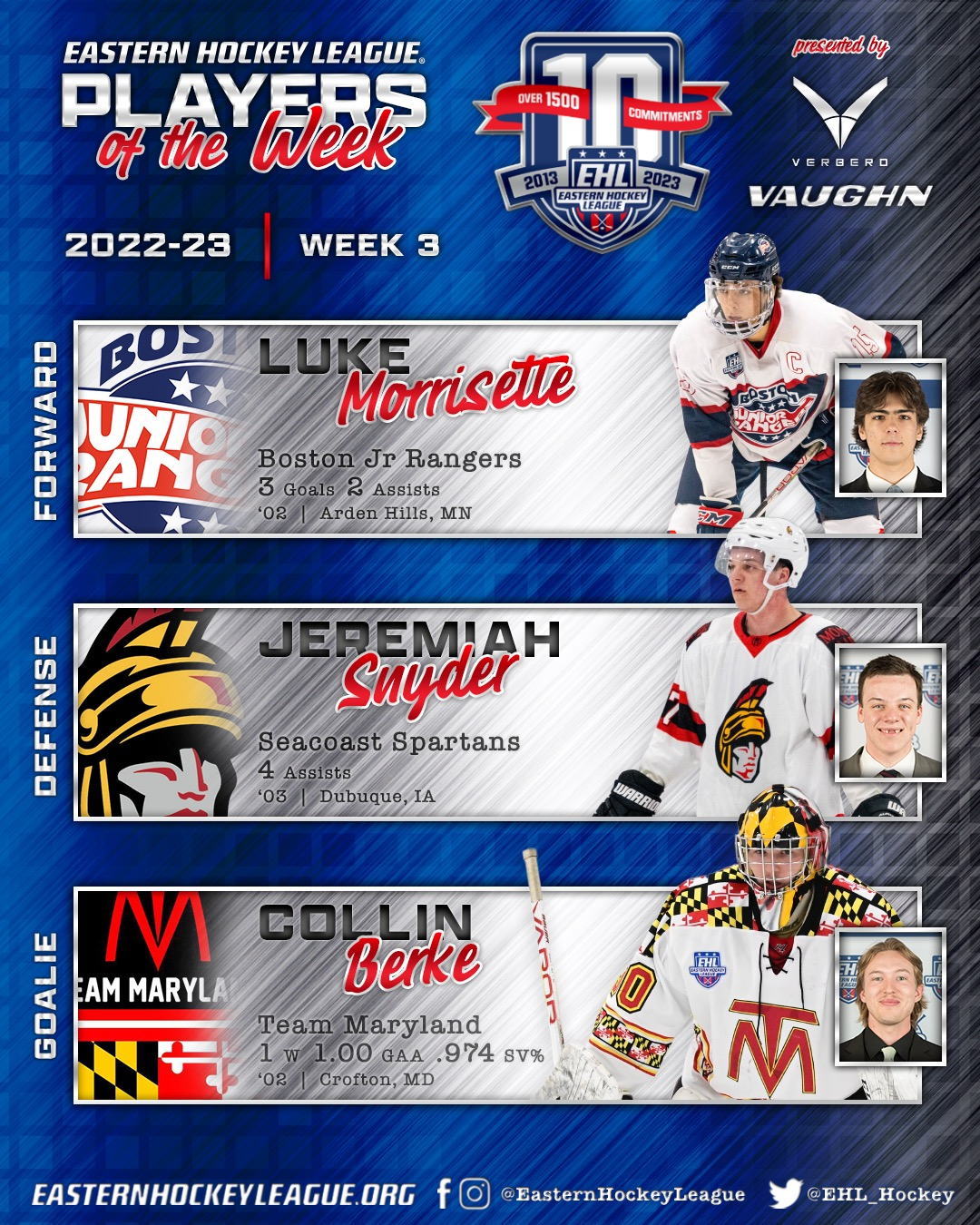 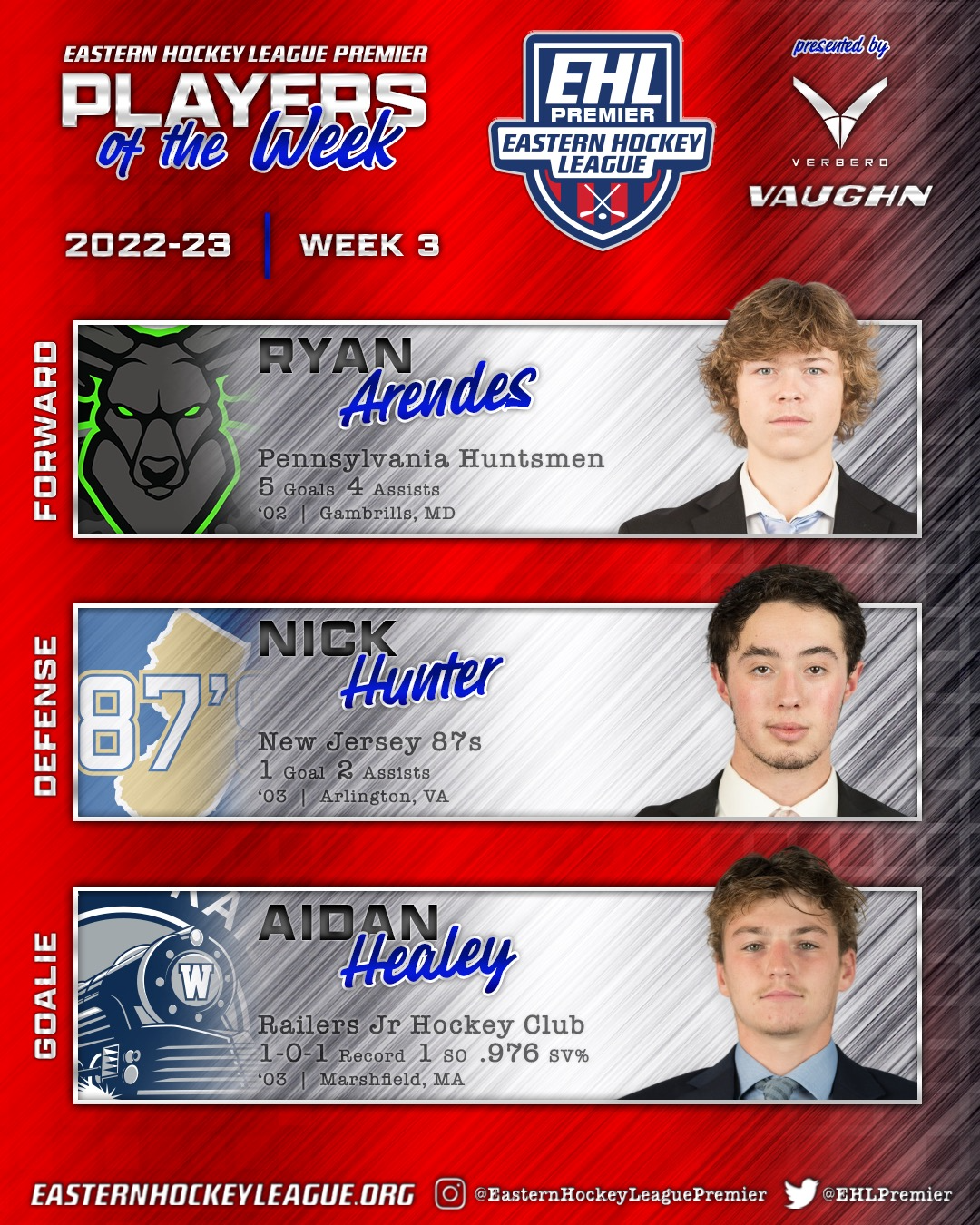