Kicking things off with Pray, the '02 native of Wheaton, IL, no forward got off to a better start in the opening month of the season, as the lethal playmaker tallied an even eight goals and eight assists in six total games. After averaging a point per game with 48 points in 48 games this past year, Pray is off to a historic pace in his age-out campaign.

As for his team's record over the course of those six games, Seacoast posted a 5-1-0 mark, winning five straight contests after being shutout in their season opener. It's also worth pointing out that on top of leading the league in scoring, Pray also leads the league with four game-winning goals, as half of his September tallies led to victories for the Spartans.

Speaking of the team that shutout the Spartans in the season opener, the Wolves were near-perfect themselves, going 5-1-0 as well over the course of their six total games.

Starting off with Demio, the '02 native of Duxbury, MA matched his total points from the 2021-22 season in just a single month of the 2022-23 campaign. This past month, Demio scored a pair of goals to go along with five assists.Tack on an assist in the Wolves very first game of October, and Demio has already set a new career high for points in this, his age-out campaign.

Then, moving back between the pipes and also returning to the Wolves for his final year of junior hockey, Joule owned a spotless 3-0-0 record in the month of September to go along with a 0.670 GAA and a .969 save percentage. It's safe to say that Joule's victory on the final day of the Round Robin at the 2022 EHL Frozen Finals, provided him with the perfect amount of confidence to kick-off the 2022-23 season on the right foot.

Starting with Manning, Parent, and the Lumberjacks, Vermont picked up where they left off in the 2021-22 season, by winning all five of their games in the opening month of the year, all while outscoring their opponents 32 to 9 along the way.

As for Manning, the '03 native of Chandler, AZ was one of a handful of forwards that helped set the pace for Vermont, tallying 13 points with three goals and 10 assists to his credit. Playing in his first-ever season of junior hockey, Manning hasn't displayed any 'rookie' signals so far.

Sticking with the Lumberjacks, Parent is back for his 2nd season with Vermont, after racking up 13 total wins this past year. The '03 native of Canada took some solid strides towards surpassing that mark, by winning a trio of games in September. Along with three victories, Parent managed an even 2.00 GAA and a solid .941 save percentage.

Wrapping things up with another rookie, Cornatzer jumped right into the thick of the junior hockey world by scoring the overtime winner for the 87's in his team's opening day matchup with the Philadelphia Little Flyers. From there, Cornatzer added five assists to his credit, throughout the opening month.

Similar to how Vermont leads the way in the New England Division of the EHLP, Cornatzer and the 87's also find themselves in 1st place amongst their respective set of teams in the Mid-Atlantic Division. 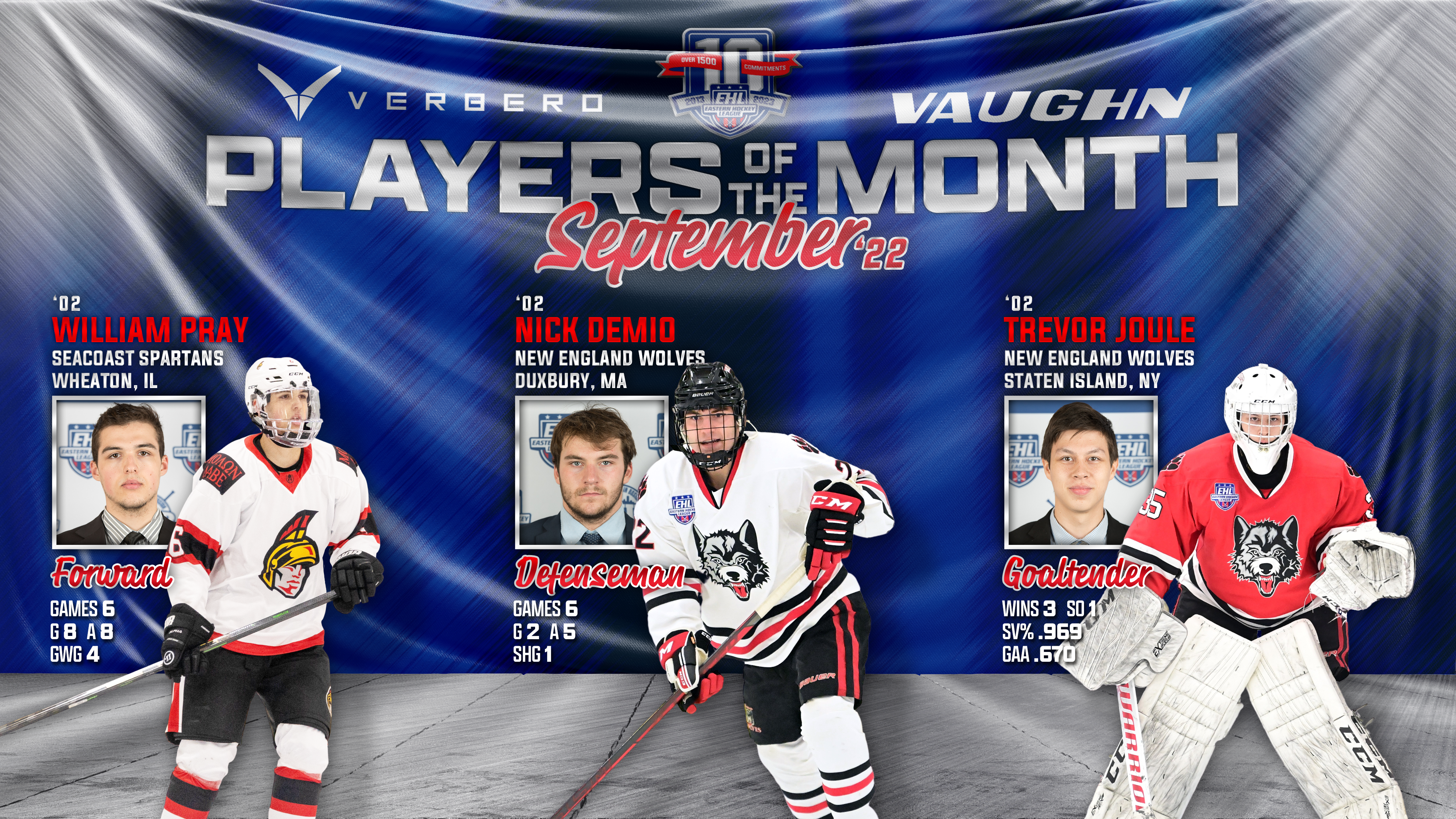 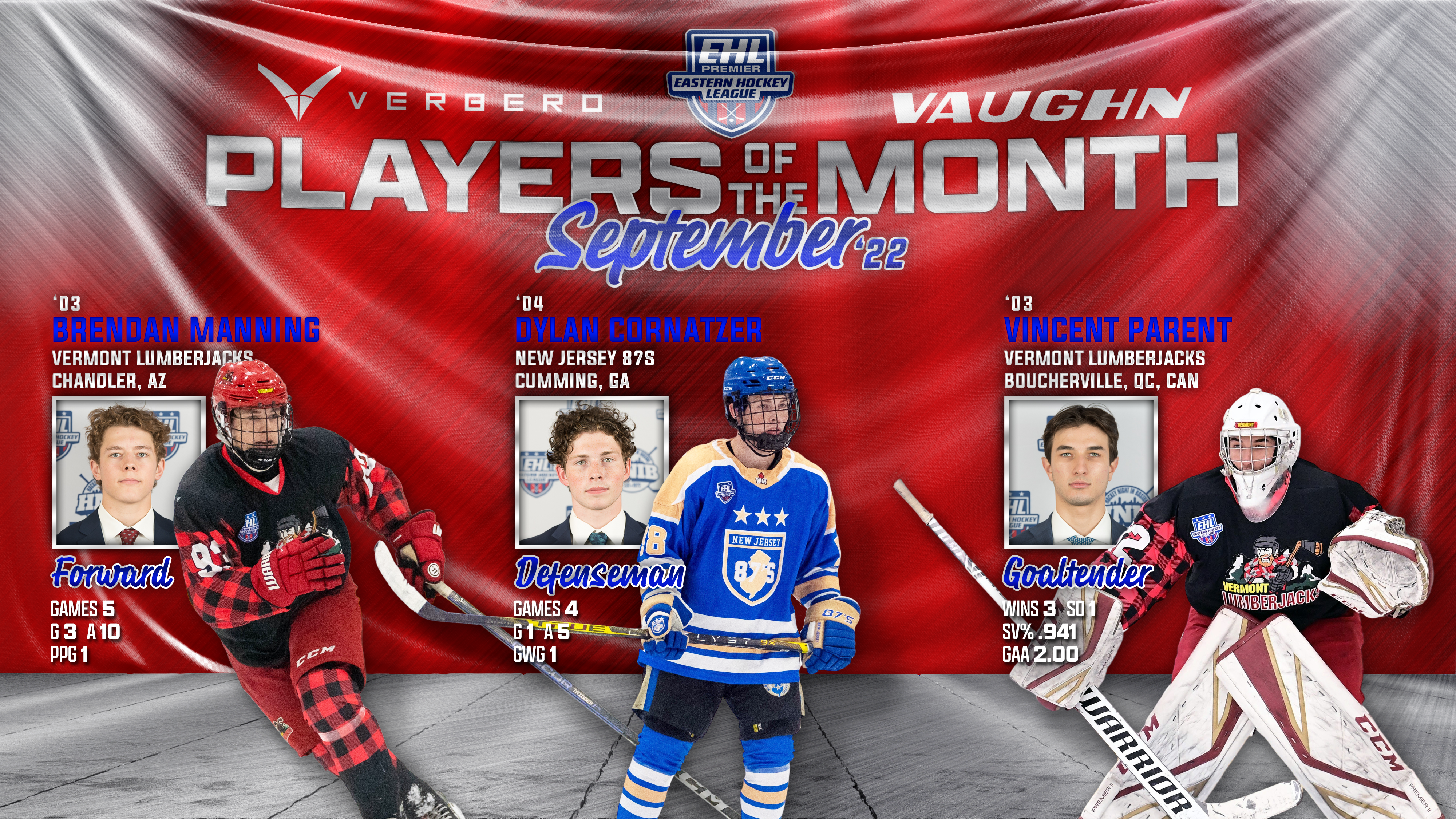