BOSTON, MA -- The Eastern Hockey League (EHL) is pleased to announce the roster for the 2022 South All-Star Team that will be taking on Lebanon Valley College (LVC) on Saturday, October 22nd at 7:00 pm.

This exhibition matchup is a new addition to the EHL All-Star College Series which has grown since its inception back in 2017. 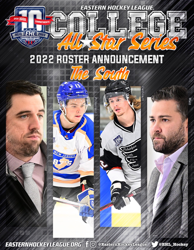 "I was very excited when Don [Parsons] reached out with the idea for this additional exhibition matchup," said Neil Ravin, the Associate Commissioner of the EHL. "I've said it before, and I will say it again, when it comes to these games they're truly special because our players get the chance to play college hockey right now, while they're still developing at the junior hockey level. The response we've received over this annual event [EHL All-Star College Series] from the NCAA Division II and III community has been amazing, and it's led to this type of growth, where we can add in additional matchups based off of the different regions of our footprint."

Leading the All-Stars behind the bench at LVC will be Terry Watt from the Ducks and Josh Fusco from Maryland.

Below you'll find the roster for the 2022 South All-Star team.

The exhibition matchup will be streamed live on HockeyTV.