Below you'll find the 10th set of weekly top performers for the 2022-23 season. The forward and defensemen awards are presented by Verbero Hockey, while the goalie honors come courtesy of Vaughn Custom Sports.

The EHL is pleased to announce that Drew Olivieri (Seacoast Spartans), Victor Malzahn (Boston Jr. Rangers), and Kyle Spann (New Jersey 87's) have been named the Top Performers for Week #10.

Olivieri and the Spartans hit the ice for a pair of games this past week, taking care of business in their home-and-home series against the Railers Jr. Hockey Club. The '02 native of Swampscott, MA set the pace against his former team, tallying eight total points over the course of the two-game series. Olivieri finished with three goals and five assists to his credit, including the game-winning tally on Friday afternoon in Exeter, NH.

For the season Olivieri now has 30 points through 18 total games to date, which puts him on a great pace to surpass the 54 total points his collected in 54 games this past year combined between the regular season and the postseason. At 13-4-2, Olivieri and the Spartans are right in the thick of things in the mighty North Division, with eight games coming up for Seacoast in the month of December.

Malzahn and the Rangers also hit the ice for a pair of games this past week, beating the East Coast Wizards by a score of 4-1 on Thursday, and following that up with a 3-1 victory over the Connecticut Chiefs on Saturday. As for the '02 native of Corona Del Mar, CA, Malzahn tallied a goal and an assist to his credit over the course of the two games, increasing his scoring total up to 12 points in 21 games to date.

After starting the season 0-4-0, Malzahn and the Rangers have posted a 13-4-0 mark in the previous 17 games. The solid stretch has propelled Boston all the way up into 1st place in the East Division, as they've now earned a well-deserved short break. Malzahn and the Rangers will return to action on Thursday, December 1st, on the road against the New Hampshire Avalanche.

Wrapping things up in goal, Spann was one of five goaltenders who earned a shutout this past week in the EHL. As for the '03 native of Lok, MO, Spann's 35-save performance against Team Maryland on Thursday, led his team to a 4-0 victory. The perfect game in net was Spann's second shutout of the season, as he improved his overall record up to 6-4-1 for the year. As the season has progressed, Spann has taken over the goal for the 87's, and look no further for proof than the 1.65 GAA and .939 save percentage that the netminder has posted to date.

At 12-6-3, the defending EHL Champions currently sit in 2nd place in the South Division, but they also own three games in hand over the team in front of them, the Protec Jr. Ducks. Speaking of the Ducks, that's who New Jersey will be facing next, when Spann and his teammates return from the short break next Thursday.

Domokevjevs and the Wolves swept their pair of home games this past weekend, beating the Express Hockey Club by a 9-2 score on Saturday and following that up with a 6-3 victory over the New Hampshire Avalanche on Sunday. As for the '06 native of Bauska, Latvia, Domokevjevs tallied five total points over the course of the weekend, and included in that production were both game-winning goals. For the season Domokevjevs now has 20 points in 17 total games to date.

At 10-4-3, the Wolves currently find themselves tied for 3rd place in the New England Division, but it's also worth noting that they've played the fewest games of any team with 17 completed contests to date. Coming out of the short break, Domokevjevs and Wolves have seven games scheduled in the month of December, starting with a road matchup against the Boston Jr. Rangers on Saturday, December 3rd.

Micciche and the Seahawks split their two-game series with the Valley Jr. Warriors this past week, as their record now stands at 10-9-1 for the season. As for the '03 native of Reading, MA, Micciche registered back-to-back three assist games in the series, as he's now tallied eight total assists over his last three contests. Overall, Micciche has racked up 19 points in 20 games to date, as he continues to improve throughout his first season of junior hockey.

Coming up this week, Micciche and the Seahawks are off until Saturday, when they return to action for two games in two days on the road against the Express. Following this weekend's series, the Seahawks will play five games from December 1st to December 8th, before taking off for an extended break over the holidays.

We're just 10 weeks into the season, and this marks the third time so far that Healey has been named the Goalie of the Week in the EHLP. Following his 3rd shutout of the season, the '03 native of Marshfield, MA now owns a record of 7-1-1 to go along with a 1.62 GAA and a .944 save percentage. It's also worth pointing out that the single-season record of five total shutouts is well within reach for the 19-year-old netminder.

As for the Railers, the team currently owns a record of 15-5-1, and their 31 points puts them two ahead of the Boston Jr. Rangers for the top spot in the Boston Division. The Rangers however, have played three fewer games, which just adds even more sizzle to their upcoming matchup on Thursday, December 8th. That contest is one of six that Healey and the Railers will hit the ice for in the final month of the calendar year. 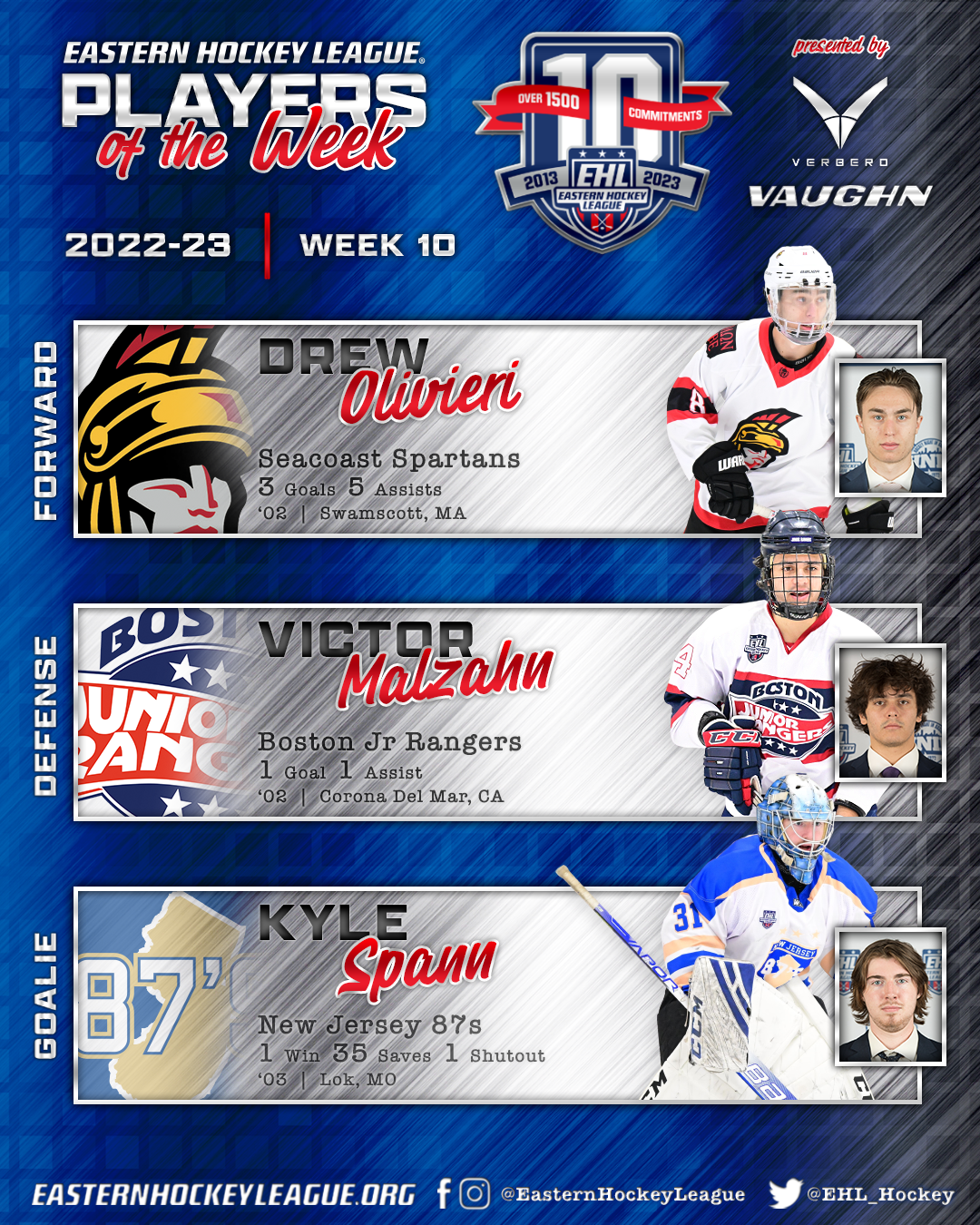 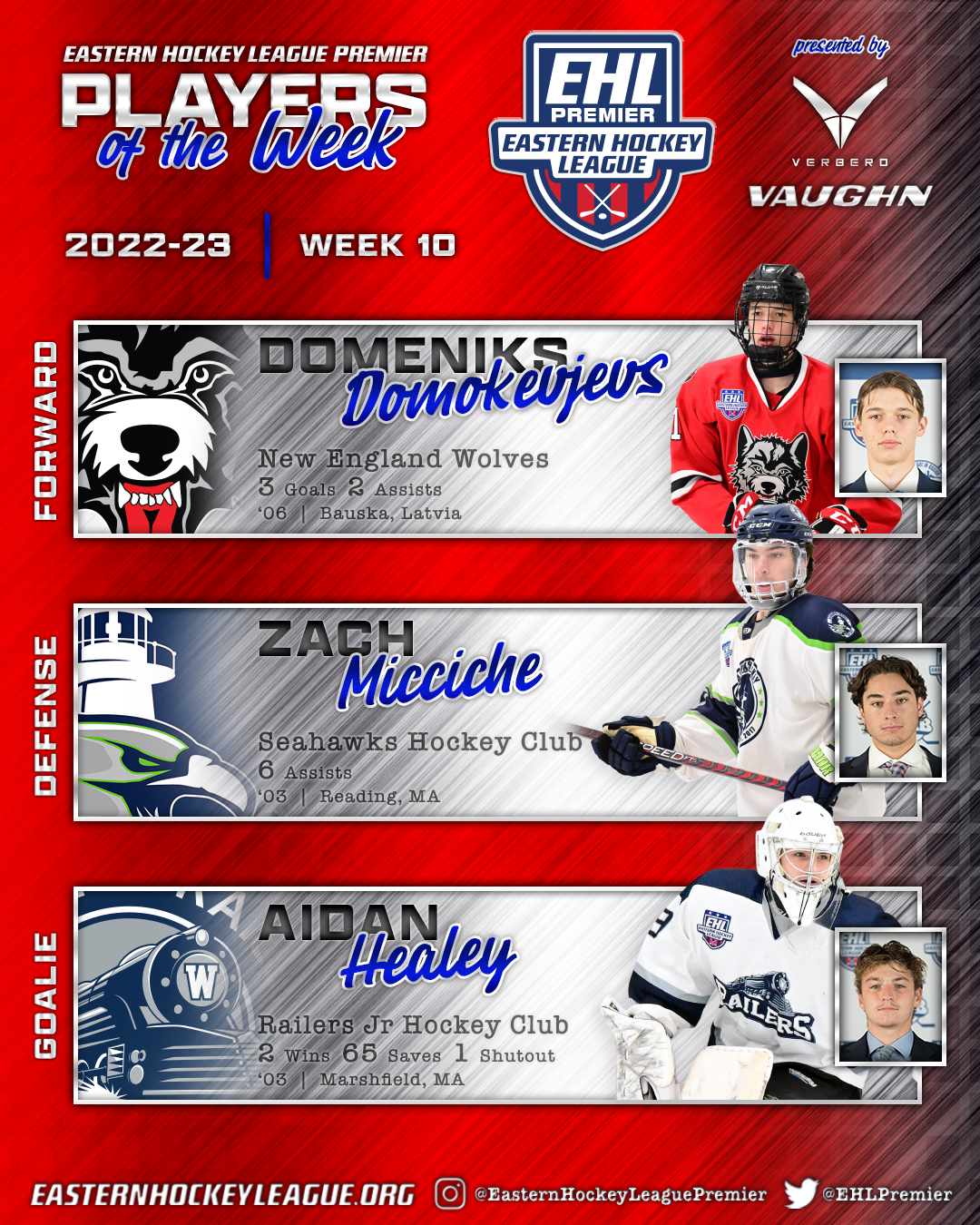