The EHL is pleased to announce that Aden Hotchkiss (New Hampshire Avalanche), Adam Jubran (Seahawks Hockey Club), and William Billequey (Vermont Lumberjacks) have been named the November Stars of the Month.

Hotchkiss and the Avalanche owned a perfect 7-0-0 record over the course of November, due in large part to the play of their captain. The '02 native of Palm Coast, FL soared his way to the top of the scoring charts in the EHL by tallying 15 total points to his credit. With 36 total points to date, the Plymouth State commit is well on his way to setting new career high marks in his final season of junior hockey.

With an overall record of 16-3-1, the Avalanche begin the final month of the calendar year on top of the overall league standings, but more importantly, the North Division standings as well. With seven more games on the schedule in December, Hotchkiss will look to continue to lead the way for his team as they strive to maintain their position at the top heading into the holiday break.

Jubran the Seahawks were busy in the month of November, hitting the ice for 11 total games and posting a record of 7-3-1 along the way. The 15-point month propelled the Seahawks up in the East Division standings, as they begin December tied at the top with the Boston Jr. Rangers.

As for the '02 native of Cortland, NY, who was a part of the EHL All-Star Team that took on Nazareth and Brockport at the end of October, Jubran padded his stats with 13 assists throughout the month of November. For the season, the veteran defenseman now has 25 points through 24 games to date, which leads all defensemen throughout the entire EHL. Coming up in December, the Seahawks remain busy with eight more games between now and the start of the holiday break.

Keeping up with the trend of teams that played well in the month of November, Billequey and the Lumberjacks owned a mark of 7-2-0 over the course of their nine games this past month. As for the '02 native of Canada, Billequey stood tall between the pipes for seven of those victories, including a pair of shutouts. Overall, the second-year netminder leads the league with 12 total wins to date, and his 2.75 GAA and .930 save percentage place him amongst the top tier of goaltenders in the EHL.

With a record of 15-6-0, Vermont finds themselves right in the thick of things in the North Division, heading into the final month of the calendar year. Billequey and the Lumberjacks have five games in December, as they look to build some momentum up heading into 2023.

The EHLP is pleased to announce that Jack Merkosky (Adirondack Jr. Thunder), Zach Micciche (Seahawks Hockey Club), and Vincent Parent (Vermont Lumberjacks) have been named the November Stars of the Month.

Merkosky and the Thunder posted a record of 3-2-1 over the course of their six games in the month of November, and the seven total points that they accrued helped Adirondack maintain their position right amongst the thick of things in the New England Division.

As for the '02 native of Queensbury, NY, Merkosky led the way for his team offensively tallying 11 total points throughout the month. Ever since scoring the very first goal in the history of the franchise back in September, Merkosky has put together a solid campaign that ranks him towards the top of the league scoring charts with 10 goals and 21 assists to his credit through 19 total games to date. Merkosky and the Thunder have six games on the schedule in December, leading up to the holiday break.

Staying consistent with the EHL, the top defenseman this past month in the EHLP also came from the Seahawks Hockey Club. Micciche and the EHLP Seahawks also hit the ice for 11 games, winning seven of their contests, and posting a record of 7-4-0 along the way. As for the '03 native of Reading, MA, Micciche led all EHLP defensemen with 12 total points throughout November. Overall, Micciche now has 19 points through 22 games to date, which ranks him 2nd overall on the league's defensive scoring chart.

Micciche and the Seahawks currently sit right in the middle of the Boston Division standings, as they'll look to improve on their 3rd place position heading into the holiday break and into the new calendar year.

Once again, keeping with the trend set forth by the selections for the EHL Stars of the Month, the top netminder in the EHLP also came from the Vermont Lumberjacks. Parent and the Lumberjacks posted a record of 7-2-0 in the month of November, and after winning four of those contests, Parent has now claiming his 2nd Goalie of the Month award of the Season.

Overall, the 2nd-year netminder for the Lumberjacks owns a record of 9-4-0 heading into the final month of the calendar year. After posting 13 total victories throughout the entire 2021-22 season (combined regular season and postseason), the '03 native of Canada is well on his way towards surpassing that total this year. 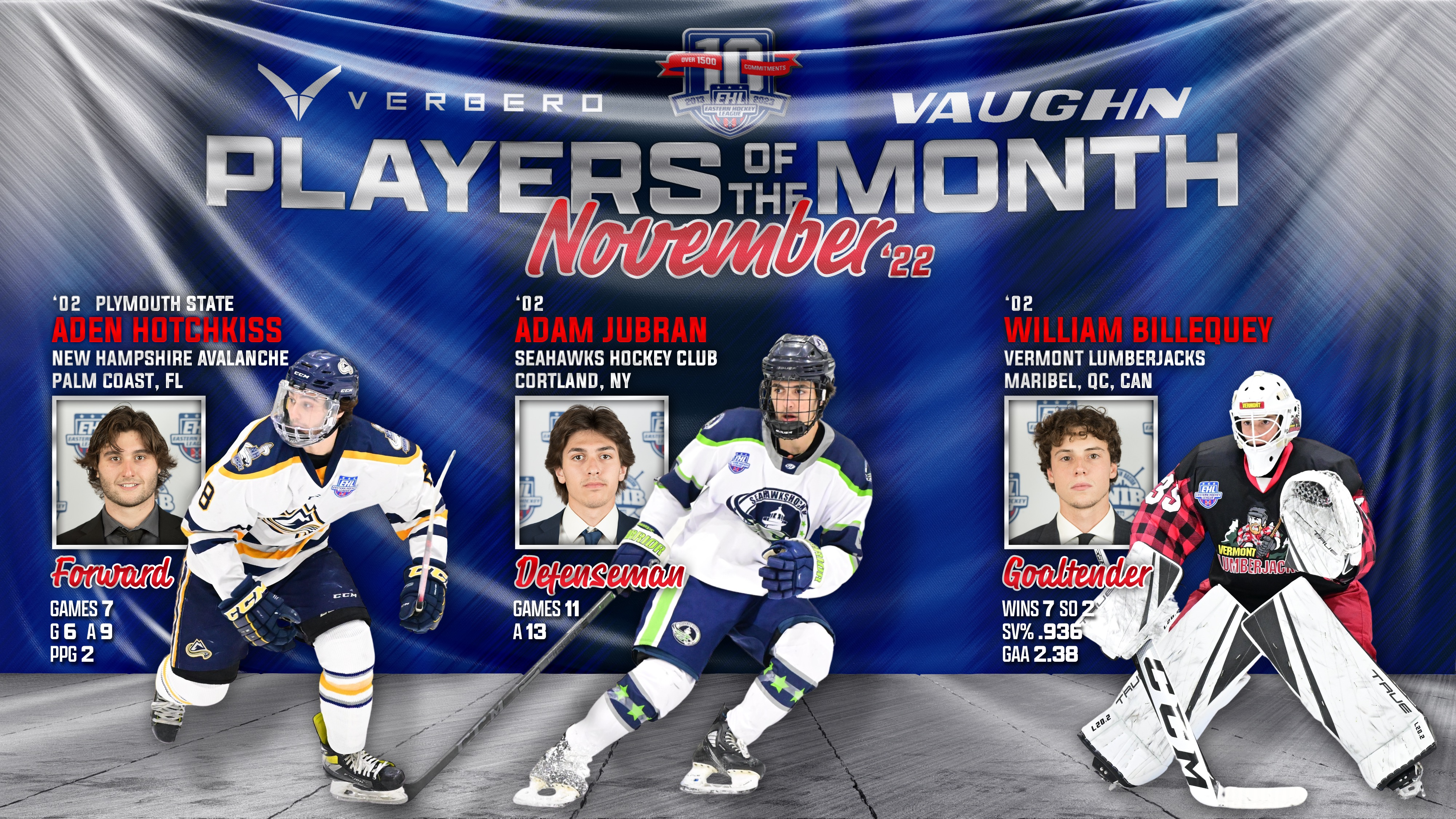 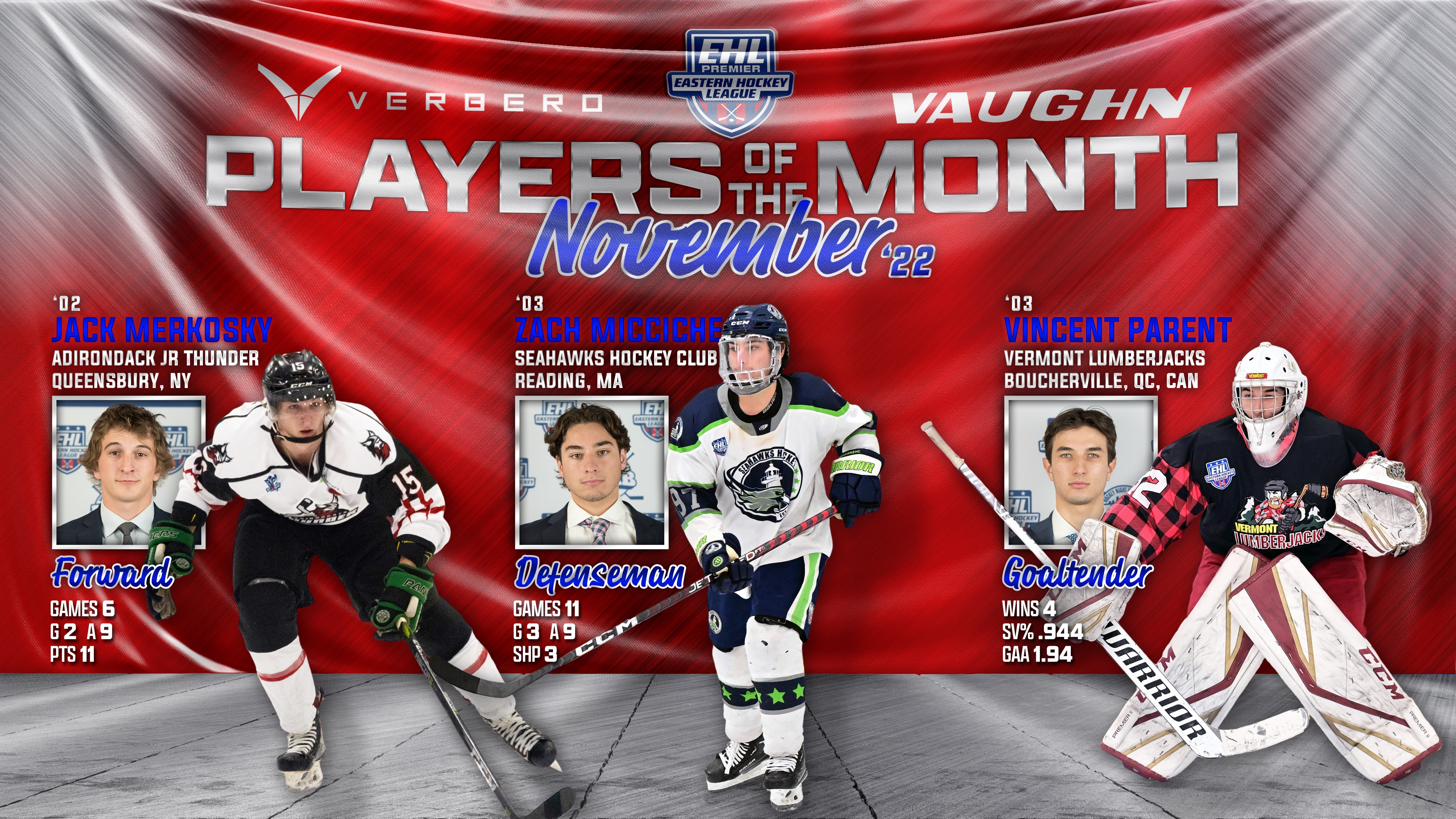