WORCESTER, MA -- Jack Lee, a forward for the Railers Jr. Hockey Club, has committed to Nichols College for the second half of the 2022-23 season.

The '02 native of Chicago, IL is in his third season in the Eastern Hockey League (EHL), and second year with the Railers Jr. Hockey Club, after beginning his junior hockey career with the New England Wolves back in the 2020-21 campaign. Overall, Lee hit the ice for 76 career games throughout his time in the EHL, tallying 32 goals and 31 assists along the way.

"I have seen Jack Lee grow on and off the ice over the past two years,” said Railers head coach Sean Bertoni. "Jack is a tremendous competitor. He has great quickness and speed, and his feet are always moving. He generated a lot off the rush and can finish around the net. Jack would be the first to the rink every day and is always looking to get better. Coach A (Railers GM Mike Addesa who passed away in late November) was also someone who impacted Jack in a positive way and helped him throughout the college process. He made Jack a better person and player, I am not sure Jack is the player he has become if not for Coach A.”

The player Lee became was nearly a point-per-game forward in the league, and a huge reason the Railers made their first-ever appearance at the EHL Frozen Finals this past March. Following that accomplishment, Lee had returned to Worcester, looking to help his team seek a little revenge towards the way their 2021-22 season had ended.

The veteran forward got off to a hot start, and quickly was selected to participate in the 2022 EHL All-Star Classic. That's worth noting because Lee is one of two players from the EHL heading off to join the Bison next week, the other being Brendan Schmidt of the New Hampshire Avalanche, whom also hit the ice for the All-Star Classic back in November.

“There were a lot of things about Nichols that piqued my interest,” said Lee. “They have a great business school which fits my major. It’s not far from Worcester so I feel familiar with the area. They play in the CCC which is a very competitive conference, and I had heard great things from a former teammate [Damon Dulac] who plays there, and also great things about their coaching staff. I got a strong feeling that it was a place that I would be successful at academically, and after seeing their locker room, arenas and gym, I felt the same way athletically. It was a feeling of immediate comfortability for me.”

Lee went on to talk about his time with the Railers organization, and how grateful he truly is for the past two seasons.

"I obviously love the Railers organization," added Lee. "I see every coach and player as a close friend so going to college mid-season meant leaving them, which was hard to think about, but every guy on the team expressed their support and they all wanted me to be happy with the decision which was great. The Railers organization has helped me in every aspect of my life. On the ice, I believe they have prepared me for college hockey more than I could’ve ever imagined. Off the ice, they have helped me mature which has also helped prepare me for the responsibilities that come with college.”

Learn more about the Railers on the team's official website, and check out the full 2022-23 NCAA commitment list. 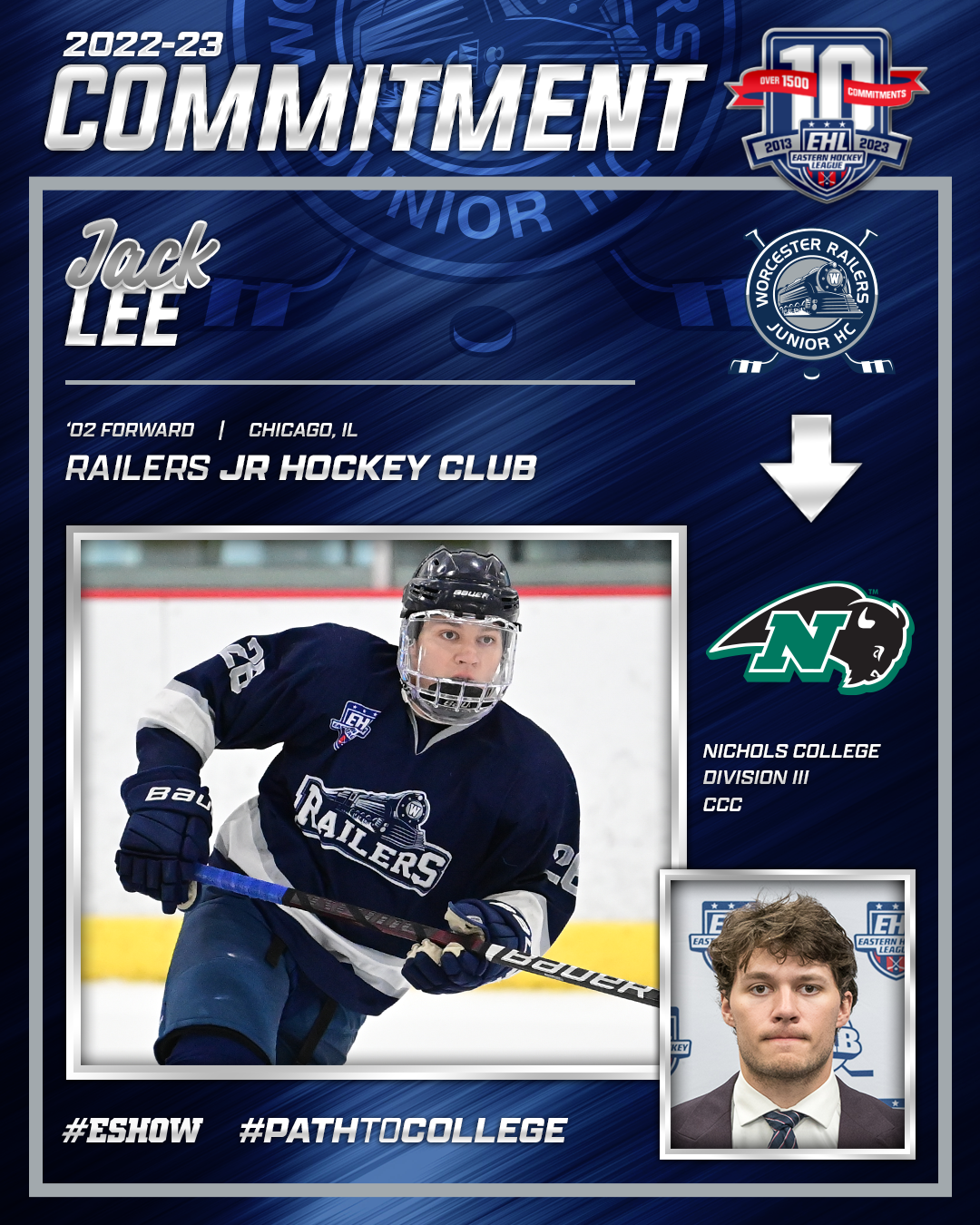