Below you'll find the 17th set of weekly top performers for the 2022-23 season. The forward and defensemen awards are presented by Verbero Hockey, while the goalie honors come courtesy of Vaughn Custom Sports.

Saurbaugh and the Express took care of business at the Exeter Showcase this past weekend, claiming victories over the Protec Jr. Ducks, Philly HC, and the Connecticut RoughRiders. After earning a six-point weekend, the Express also leap-frogged the Boston Jr. Rangers for 1st place in the East Division standings.

As for the '03 native of Painted Post, NY, Saurbaugh scored four goals throughout the showcase, to go along with an assist. For the season, the talented forward now has 22 points in 29 total games to date, and that includes nine points in his last seven contests. The recent hot streak is undoubtedly a big reason why the Express have skated away victoriously in 10 of their last 12 games. Saurbaugh and the Express will look to keep things rolling when they host the East Coast Wizards this upcoming Saturday afternoon at 4:10 pm.

Ogborn and Philly HC won two of their three games at the showcase this past weekend, improving their record up to 15-14-4 for the season. The four-point showcase keeps PHC right in the thick of things in the South Division, as they continue to battle for playoff positioning.

As for the '03 native of Linwood, NJ, Ogborn notched four points to his credit by scoring a goal and dishing out three assists. For the season, the 6'3 defenseman now has nine points through 29 total games to date. Coming up this week, Ogborn and PHC have a pair of very important games on the schedule, as the play host to the New Jersey 87's on Thursday and Team Maryland on Friday.

Wrapping things up in goal, Kulhanek and the Railers won all four of their games this past week, including a trio of victories at the showcase. The '02 native of Austria was in net for three of the victories, increasing his career total up to 49 throughout his time in the EHL. With three more wins, the veteran netminder will tie Nathan Mueller from the Boston Jr. Rangers, for the most career victories in league history.

As for his overall numbers this year, Kulhanek has put together a record of 12-5-0 to date, to go along with a 2.35 GAA and .926 save percentage. It's also worth noting Kulhanek's play as of late, as he hasn't given up more than two goals in a game since just before Thanksgiving. He'll look to take another step towards cementing his name in the EHL Record Books in Worcester's upcoming home-and-home series against HC Rhode Island.

It was a weekend to remember for Blanchard and the Thunder, as Adirondack swept their weekend schedule in convincing fashion, outscoring their three opponents by a combined margin of 25-5. As for the '03 native of Wilton, NY, Blanchard scored seven of those goals, while assisting on three others, to increase his season totals up to 42 points in 30 total games to date. Also, not included in those impressive totals, is Blanchard's game-winning goal from the EHLP All-Star Game on Saturday night, in which he converted in overtime to give Team White a 5-4 victory over Team Gray.

The perfect weekend in New Hampshire bumped Adirondack up into 1st place in the ever-difficult New England Division, as they now get set for a huge two-game series this upcoming weekend against the Vermont Lumberjacks. Vermont currently sits just one point behind the Thunder for the top spot in the division, but they also own four games in hand. Combined together, the two teams have won 13 straight games.

Keeping with the trend of players that participated in the All-Star Game, Sember did just that, but he also helped the Wolves also complete a sweep of their own at the showcase. After dropping a 5-2 contest to the Valley Jr. Warriors last Wednesday, the Wolves bounced back by earning wins over the Union Jr. Thunder, Express Hockey Club, and the Philadelphia Little Flyers, over the course of the final showcase of the season.

As for the '06 native of Webster, NY, Sember claimed his 2nd Defenseman of the Week honor after tallying six total points with two goals and four assists. For the season, the rookie defenseman now has 24 points in 25 games to date, and those totals include at least a point in each of his last 11 contests. Sember and the Wolves find themselves just one point behind the Lumberjacks for the next spot down in the New England Division, with a single game this upcoming weekend on Saturday night against the Seahawks Hockey Club.

Putting a bow on things between the pipes, and continuing with the trend of players that hit the ice for the All-Star Game, it was solid weekend for Mutschler and the Rangers. The '03 native of Mechanicsburg, PA was in net for two of his team's three victories, as Boston re-claimed the #1 spot in the EHLP Power Rankings.

Outside of the 12 saves that Mutschler made in his period of work during his 2nd straight All-Star appearance, the 6'4 netminder improved his record up to 9-2-0 for the year. The near-perfect record is a strong indication of the great season Mutschler has had, as he's also amassed a 2.10 GAA and a .935 save percentage. Mutschler and the Rangers are now dead-locked in a tie with the Railers Jr. Hockey Club for the top spot in the Boston Division standings.

Prior to the next showdown between the rivals on the 26th, Mutschler and the Rangers will hit the road for matchups against the Express on Saturday and the Warriors next Wednesday the 25th. 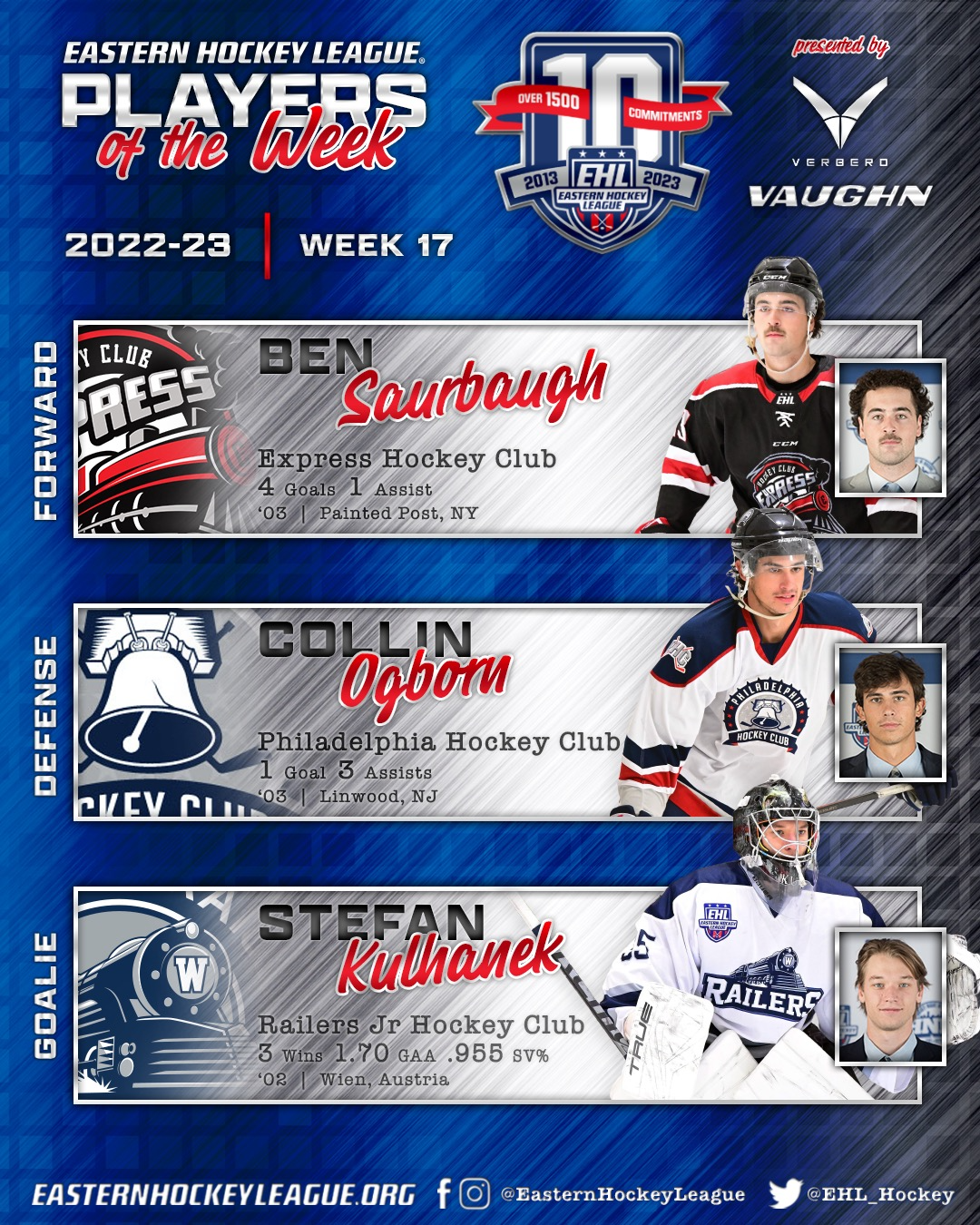 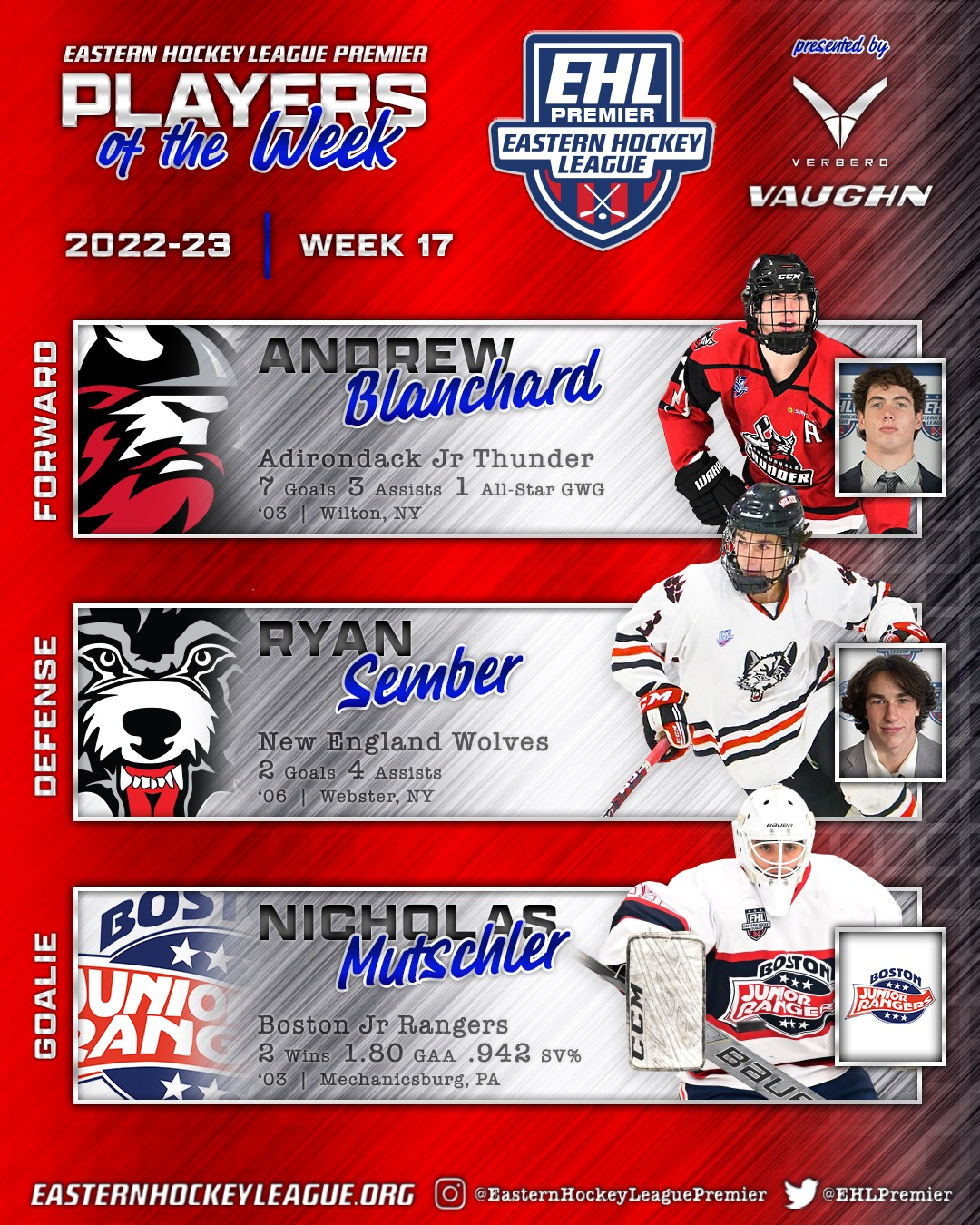