Below you'll find the 18th set of weekly top performers for the 2022-23 season. The forward and defensemen awards are presented by Verbero Hockey, while the goalie honors come courtesy of Vaughn Custom Sports.

Kolovos and the Wizards hit the ice for a pair of games this past week, beating the Connecticut Chiefs by a 4-3 margin on Thursday and then making it two wins in a row with a 4-1 victory over the Express Hockey Club on Saturday. As for the '03 native of Canada, after picking up an assist against Connecticut, Kolovos factored into all four goals his team scored against the Express, finishing the contest with a pair of goals and a pair of assists each to his credit. In total this season, Kolovos has notched 37 points in 30 games to date.

The EHL All-Star has nine points in his last four contests, and he'll carry his four-game point streak into this week's matchups for East Coast. The Wizards will travel to take on the Boston Jr. Rangers on Thursday and then return home for an important game with the Valley Jr. Warriors on Friday. At 15-12-6, Kolovos and the Wizards are right in the thick of things in the East Division, as we get set to turn the calendar over to the final full month of the regular season.

Speaking of tight races, Gates and the Ducks are in a battle as well, as they are right on the heels of the New Jersey 87's for 1st place in the South Division. Part of the reason for the tight margin has to do with another two-win week for the Ducks this past week, which included a victory over their in-state rivals on Friday. Along with the win over the 87's, Gates and the Ducks also picked up a victory over the New York Apple Core yesterday afternoon.

As for the '02 native of Clifton, ME, Gates chipped in well from the blue line, finishing the two-game set with three total points, including the game-winning goal over the 87's. For the season, Gates now has 30 points in 36 total games to date, which ranks him as the third leading defensive scorer in the league. The upcoming schedule is tough for Gates and the Ducks, as they take on the Philadelphia Little Flyers on Friday, before hosting Team Maryland for three games in three days next week.

Wrapping things up in goal, and keeping with the theme of teams that won a pair of games this past week, Peremba and the Avalanche did just that by claiming victories over the New England Wolves on Thursday and the Boston Jr. Rangers on Saturday. As for the Peremba, the '02 native of South Park, PA was in net for each contest, stopping 73 of the 76 shots he faced.

The pair of wins improved Peremba's record up to 16-4-2 for the season, to go along with a 2.47 GAA and a .932 save percentage. Peremba and the Avalanche are starting to pull away from the pack in the North Division, as they get set for a big weekend series this upcoming weekend against the Vermont Lumberjacks. If the postseason began today, it would be the Avalanche vs. the Lumberjacks in the First Round of the playoffs, with Wolves taking on the Seacoast Spartans in the other North Division matchup.

Vasin and the 87's took care of business in both of their games this past weekend, beating the Philadelphia Little Flyers by the score of 7-1 on Saturday night and the Pennsylvania Huntsmen by an 8-3 margin on Sunday evening. After tallying a goal and an assist against the Little Flyers, Vasin followed things up the next day with a hat-trick against the Huntsmen, plus an additional assist.

The '04 native of Russia joined the 87's back in the beginning of the month, and through five games to date, he's already tallied seven points to his credit. New Jersey is now 21-6-3 in 30 games so far this season, which gives them a five-point advantage over Pennsylvania at the top of the Mid-Atlantic Division standings. The 87's also own a game in hand over the Huntsmen, which could prove key down the final stretch. Vasin and the 87's hit the ice next on Saturday, when they travel to take on the Union Jr. Thunder.

Randall, Healey, and the Thunder continue to motor along as the hottest team in the EHLP. Adirondack owns the longest active winning streak in the league at eight games, which includes a pair of wins this past weekend over the Vermont Lumberjacks. It's also worth noting that Vermont had won seven straight games of their own heading into the two-game series.

As for the Randall, the '02 native of Queensbury, NY scored three goals and picked up an assist, increasing his point total up to 33 for the year. By finding the back of the net in each game, Randall has also now scored a goal in four straight contests, and has tallied at least a point in six of seven games since returning from the holiday break.

As for the '04 native of Rochester, NY between the pipes, Healey claimed victories #3 and #4 of the year, as he's now 4-1-0 in four starts since joining the team in mid-December. Alongside '06 Kian Hodgins and '03 Andy Buser, Adirondack owns a goaltending trio rich with as much talent as any group in the league.

With an overall mark of 21-6-5, Adirondack has claimed their spot at the top of the New England Division standings, heading into a short break in their schedule. The Thunder will return to action next on February 8th, when they host the New England Wolves for three games in two days at the Cool Insuring Arena. 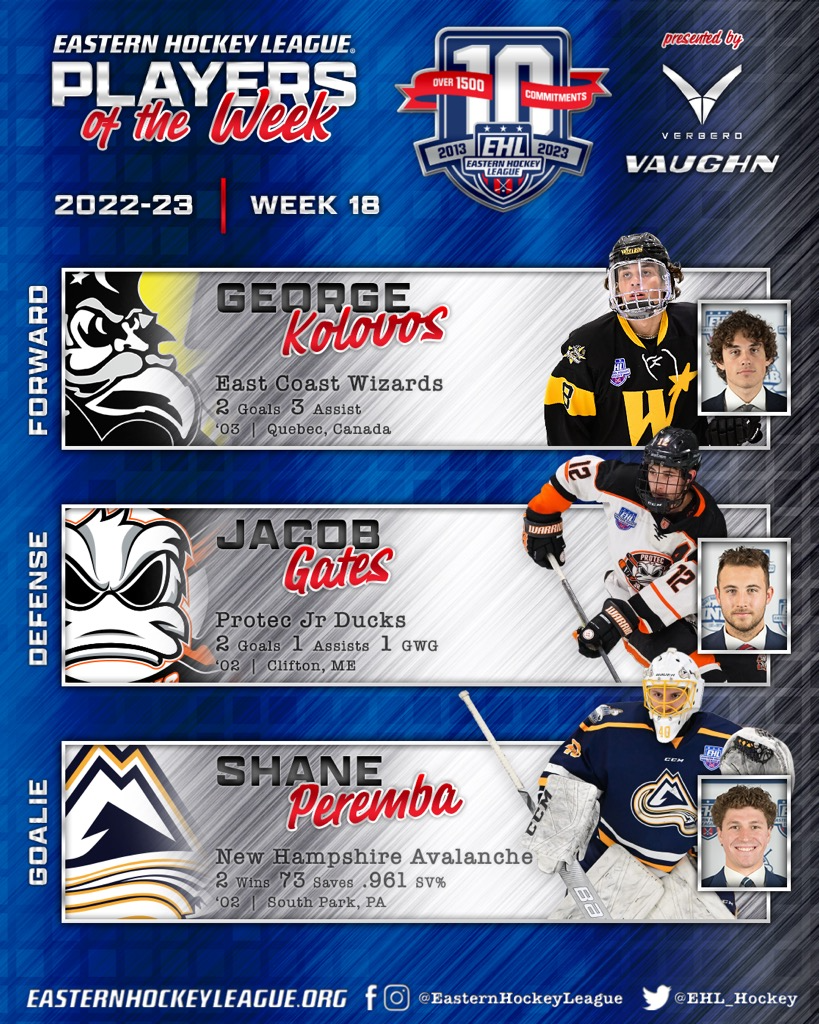 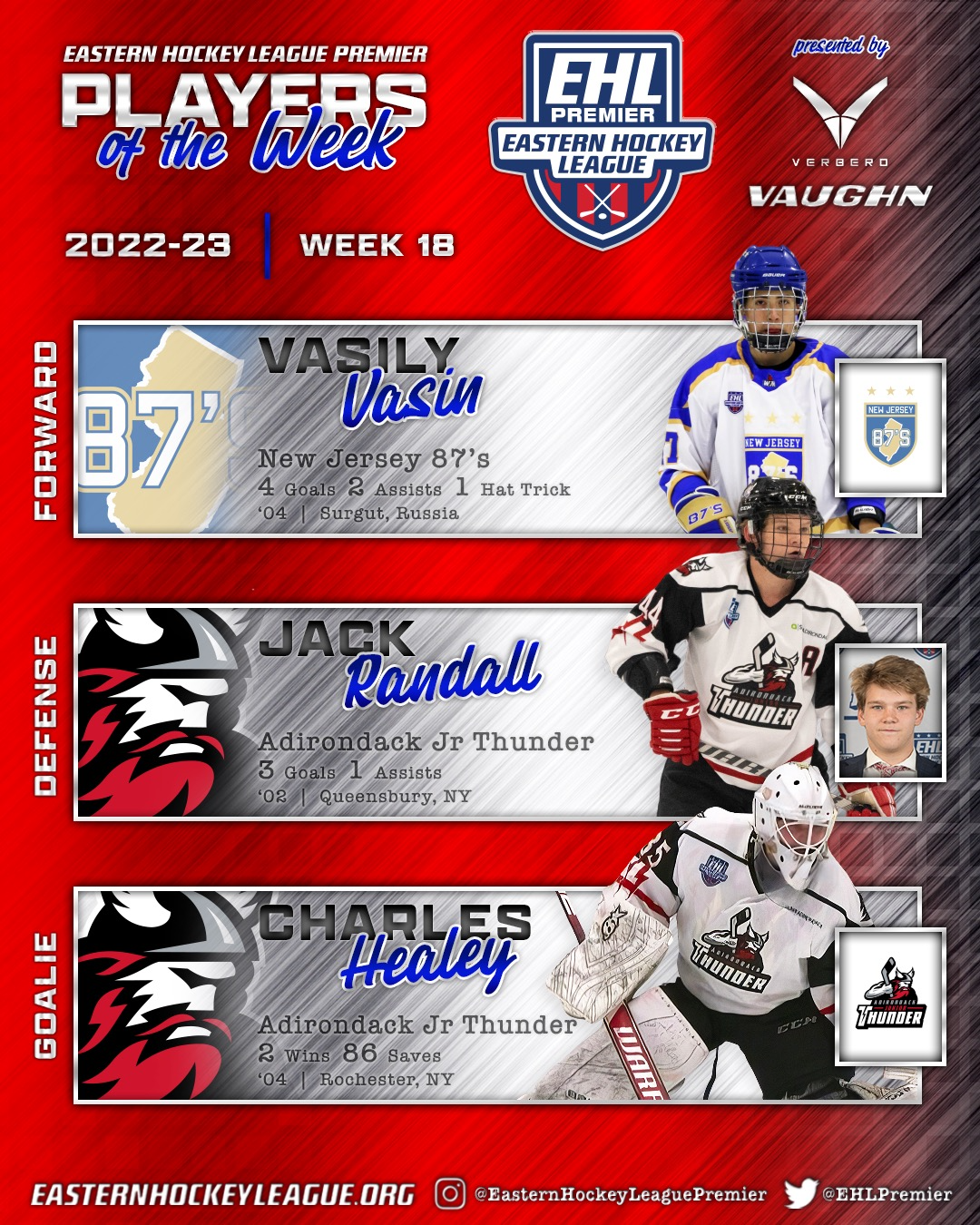