CROMWELL, CT -- Ryan Dunner, a forward for the Hartford Jr. Wolfpack, has committed to SUNY Fredonia for the Fall of 2017. In his first season in the EHL, the New Jersey native has 16 points in his first 15 games, and was named a Star of the Week following the Bedford Showcase in September.

"We chased after Ryan the past two seasons, and we're happy he came to us in his last season of junior hockey with the hopes of getting that college hockey exposure the EHL can offer," said Wolfpack head coach Chris Cerrella. "It looks like it has worked out well for him, he's playing well and he is going to a great place. He is going to be an even better college hockey player there is no question. We are very happy for Dunner and his family and we wish him the best of luck in the future."

The '96 forward has bounced around in the junior hockey world the past few seasons, playing for a few different teams. He caught the Cerrella's attention after tallying 131 points in 84 total games for the Texas Jr. Brahmas (2 seasons). Dunner's next move to the EHL paid off quickly for him and he's excited for what the future holds.

"I am very excited to be joining the Blue Devils family for next season and to start the next chapter of my life," said Dunner. "I had an awesome time playing junior hockey, but I am eager to get back into school. When I visited Fredonia I fell in love with the campus and facilities and think it is the perfect fit for me to not only continue my hockey career, but also get a good education. I would like to thank coach Merideth and the Blue Devils staff for giving me this opportunity. I would also like to thank Coach Cerrella for everything he does for me and constantly helping me and making me a better person and player. I came to the Wolfpack because of his track record of moving guys on and I know if I did what I had to do, he would move me on as well. Last but not least I would like to thank my family. My mom, dad and sister have been there supporting me since I was four years old and starting to play. Through the ups and downs they always had my back and helped me keep my head up high. I love them more than anything and wouldn't be where I am, or the person I am today without them. I will continue to work this year and in the off-season and do everything I can do to be able to make the transition to that next level."

Dunner joins a big Wolfpack community at SUNY Fredonia, that includes five players on their current roster that also played for Hartford. Not to mention, Michael Lysyj is the assistant coach for the Blue Devils, and he also spent time with the Wolfpack.

Read the full commitment story on the official website on the Hartford Jr. Wolfpack, and keep an eye on the 2017 NCAA Commitments page as it begins to take shape. 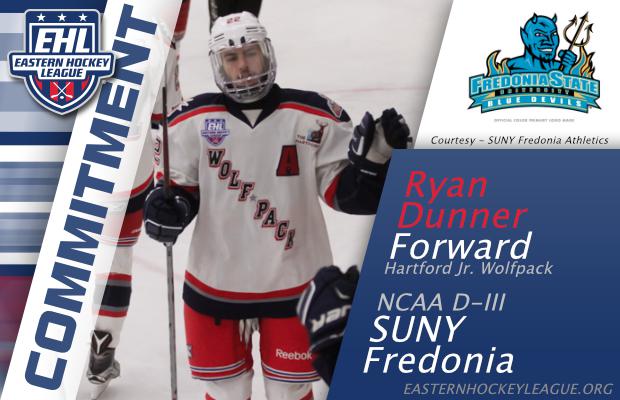