Wizards Defenseman Set to Join Monarchs in the Fall of 2017

BEDFORD, MA -- Eric Menninger, a defenseman for the East Coast Wizards, has committed to King's College for the Fall of 2017. In his first season with the team, the '97 from New City, New York has impressed the Wizards coaching staff.

"Eric is one of the best kids I have ever coached," said Wizards head coach Freddy Meyer. "Despite not playing in every game, Eric brings a positive attitude and strong work ethic to the rink every day. Lot's of players would get discouraged with being in and out of the lineup, but Eric seems to always put his best foot forward whether it's in a game or practice. Kory [Falite] and I have a lot of trust and faith in Eric, because we know what he brings to the table. As a staff we are very proud of his commitment, and there is a bright future ahead of him at King's College."

Menninger is one of four EHL players that have made their commitments to help launch a new program at King's this Fall. The other three players are Michael Cosentino (Connecticut Oilers), Thomas Green (Connecticut Oilers), and Zack Goodman (New York Applecore). The Monarchs of King's College will be playing in the United Collegiate Hockey Conference (UCHC), that will include ten men's and women's teams.

"I'm excited to be a part of a brand new program and help build and be a part of the process," said Menninger. "The Wizards helped me reach my goal by having all the resources needed to help me succeed, like top of the line workout facilities, ice time open at all times, and two great coaches in Freddy [Meyer] and Kory [Falite], that pushed me and taught me a lot along the way."

The Wizards will finish as either the #6 or #7 seed in the North Conference, and it will likely come down to their final game at 4:35pm tomorrow afternoon against the Boston Jr. Rangers.

Read the full commitment story on the official website of the East Coast Wizards, and check out the full list of 2017 NCAA Commitments. 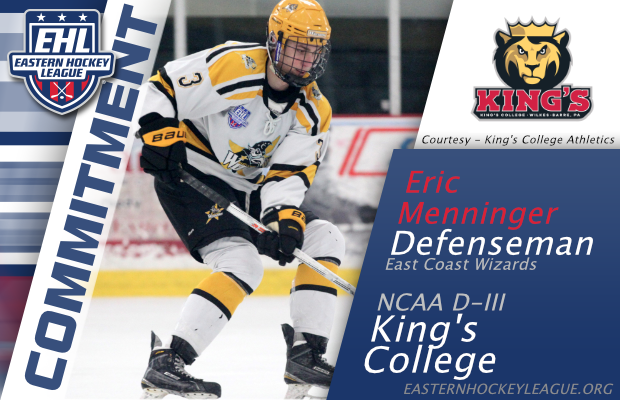