Rangers Forward Set to Join Penmen in the Fall of 2017

TEWKSBURY, MA -- Johnny Andrews, a forward for the Boston Jr. Rangers, has committed to Southern New Hampshire University for the Fall of 2017. Andrews is in his first season with the Rangers' Premier Team, after helping lead the Elite team to a championship last season.

"This is Johnny's second season with us," said Rangers Premier head coach Rich DeCaprio. "Last year he played on our Elite team and dominated. He has had a tremendous second season with our Premier team. He believed in the process and did a great job in the summer to lose 23 pounds. He now knows with his commitment finalized, the real hard work starts, both on and off the ice."

When DeCaprio uses the word dominated, he hits the nail on the head. In 44 total games, Andrews scored 37 goals and dished out 63 assists, adding up to an even 100 points last season. One would think that making the jump to Premier this year would bring his numbers down a bit, but the '96 forward has picked up right where he left off, tallying 63 points in the regular season. Andrews finished the season ranked 4th in the EHL in scoring.

"I want to thank the Jr. Rangers organization for providing me with the necessary tools and assets in order to achieve my goal of playing college hockey," said Andrews.

Andrews and the Rangers are the #3 seed in the North Conference, and they will kick-off their first round series with the Vermont Lumberjacks on Saturday night.

Read the full commitment story on the official website of the Boston Jr. Rangers, and check out the full list of 2017 NCAA Commitments. 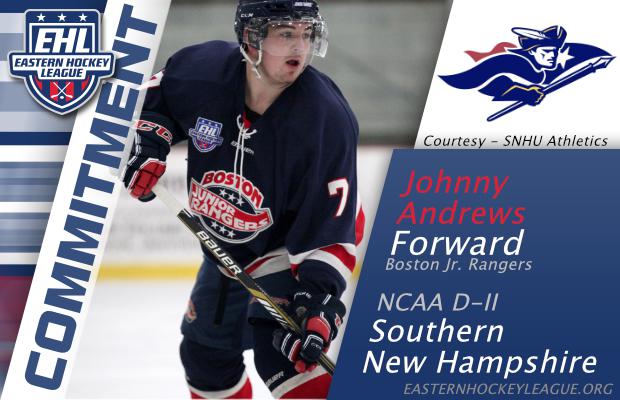