Wolfpack Goaltender Set to Join Penmen in the Fall of 2017

CROMWELL, CT -- Kevin LaCroix, a goalie for the Hartford Jr. Wolfpack, has committed to Southern New Hampshire University for the Fall of 2017. LaCroix began the season with the New England Wolves, and shortly after joining Hartford in January, finalized his decision for this upcoming Fall.

"Kevin came to us and did a good job," said Wolfpack head coach Chris Cerrella. "He has a tremendous work ethic and feel for the game, which I think will translate well at Southern New Hampshire. I wish him and his family the best of luck in the future and I look forward to watching him grow the next four years."

The '96 netminder is part of a strong group of EHL players that have made their decisions to join SNHU next season. The other future Penmen are Johnny Andrews (Boston Jr. Rangers), Zach Ciampa (Boston Jr. Rangers), Max Kent (New England Wolves), and Zach Sarnowski (Vermont Lumberjacks). LaCroix is excited to be a part of the incoming freshmen class.

"I am very thankful for the opportunity to play college hockey at Southern New Hampshire University under Coach Hutchins. On the hockey side of things, I owe it to Coach Cerrella and the Jr. Wolfpack organization. Also Coach Day, my goalie coach, who has really helped me develop to where I am today. Of course as for morale, I can't thank my family enough for the support they have given me. I am very excited to spend my next four years learning in the classroom and on the ice," said LaCroix.

Read the full commitment story on the official website of the Hartford Jr. Wolfpack, and check out the full list of 2017 NCAA Commitments. 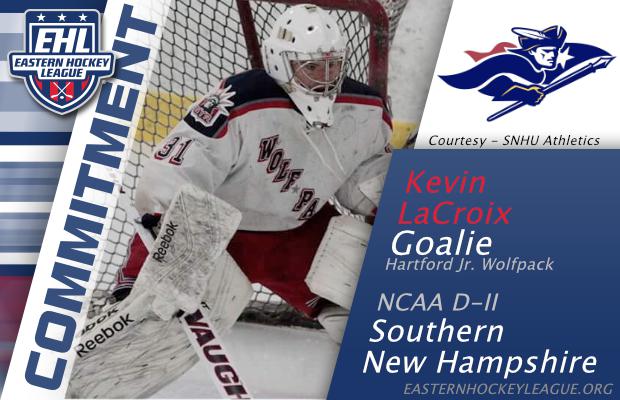