Jr. Flyers Defenseman Set to Join Monarchs in the Fall of 2017

WEST CHESTER, PA -- Jack O'Neil, a defenseman for the Philadelphia Jr. Flyers, has committed to King's College for the Fall of 2017. O'Neil and the Jr. Flyers are currently tied 1-1 with the Philadelphia Little Flyers in the Premier Division Finals.

“He struggled a little bit when he first got here last season in the beginning of the year," said Jr. Flyers head coach Jerry Domish. "I think it was more in his head than anything else. This season he has overcome that and is playing with positivity and confidence. His shot has improved a lot; he's a very good skater and a solid defenseman. He’s definitely an asset to any team.”

O'Neil has been steady for the Jr. Flyers all season long while playing in 53 of 57 total games combined between the regular season and the playoffs. The '96 from Michigan has tallied 11 points over the course of the year, and is looking to keep making his impact felt both in the remainder of the EHL Finals and at King's this Fall.

“I have had a great time here," said O'Neil. "I think what has helped me out the most is the relationships I have built with my teammates. They helped me out in tough times and I’m thankful that, and I'm thankful that I get to work with these guys. We have great facilities and we can get ice time pretty much any time you want. I have definitely learned and improved on my foot speed. Coach Jason [Kilcoyne] always told me I was fast, but I didn't use it to my advantage, so I've focused on that and have seen the difference in my game. My primary goal is to be in the lineup as an everyday player. I want to do what I can and contribute defensively and offensively and help my team succeed."

Read the full commitment story on the official website of the Philadelphia Jr. Flyers, and check out the full list of 2017 NCAA Commitments. 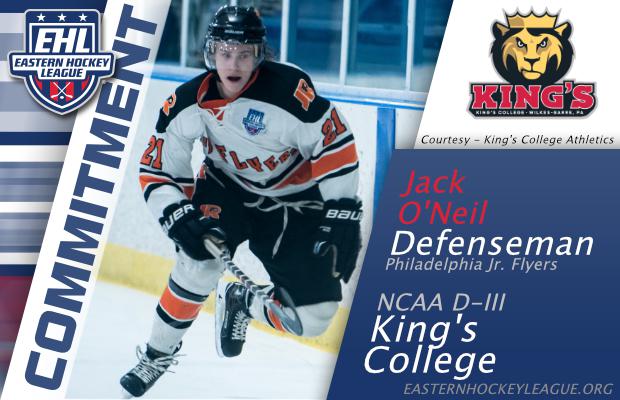