Finberg Commits to Johnson and Wales

Applecore Forward Set to Join Wildcats in the Fall of 2017

BREWSTER, NY -- Tal Finberg, a forward for the New York Applecore, has committed to Johnson and Wales University for the Fall of 2017. In his first season with the Applecore, the '96 native of New York tallied 13 points in 28 total games, including the game-winning goal in the playoff opener against the Connecticut RoughRiders.

This Fall, Finberg will be one of four EHL players kicking off their collegiate hockey careers with the Wildcats. The forward will be joined by Anthony Scarcella (Boston Bandits), Craig Hessenius (Connecticut RoughRiders), and Michael Rockwell (Hartford Jr. Wolfpack). Playing out of the competitive Commonwealth Coast Conference, Finberg and his future teammates will develop well as hockey players, while also receiving a great education from JWU.

Learn more about the New York Applecore on the team's official website, and check out the full list of 2017 NCAA Commitments. 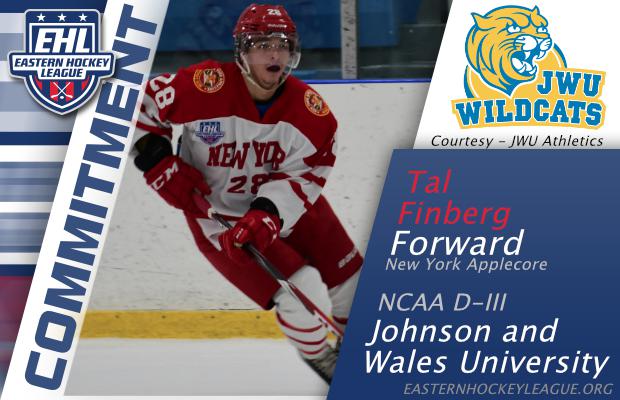