Express Alum Set to Join the Seahawks this Fall

WALPOLE, MA -- Daniel Eruzione, an alum of the Walpole Express, has committed to Salve Regina for the Fall of 2017. The '96 forward tallied 47 points in 46 games for Walpole during the 2015-16 season. Following the solid year, Eruzione joined the New Jersey Titans of the North American Hockey League (NAHL) and racked up 56 points in 56 games this past season.

"I am very excited for Danny to be headed to Salve Regina," said Walpole Express head coach and general manager Jon Lounsbury. "He's worked hard and had an incredible junior hockey career averaging a point per game in both the EHL and NAHL. We want to wish Danny the best of luck, and I look forward to watching him play in the Fall."

Eruzione joins a pair of EHL stars, that also made their commitments to join the Seahawks this Fall. The native of Massachusetts will be joined by the 2016-17 EHL Defenseman of the Year in Dylan Carabia, and a 1st Team North Conference All-Star in Paul Boutoussov.

Learn more about the Walpole Express on team's official website, and check out the full list of 2017 NCAA Commitments. 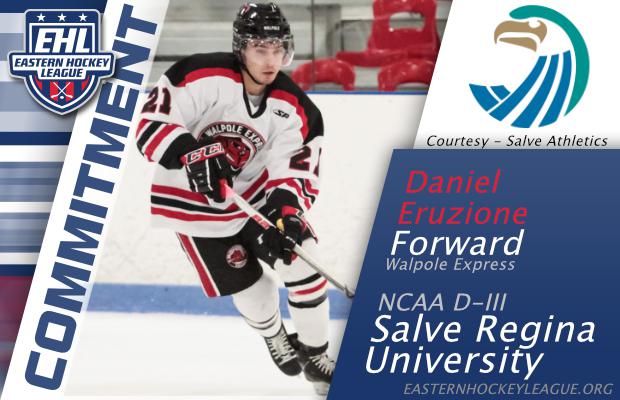