The Road to the Frozen Finals

BOSTON, MA -- The Eastern Hockey League (EHL) returns to action this weekend with half of the teams hitting the ice. Its been just about five months since the Philadelphia Jr. Flyers knocked off the Philadelphia Little Flyers for the 2016-17 EHL Championship. As they say, 'that was then, and this is now,' as the league resets with new players and new teams for the 2017-18 season.

"It's an exciting time for the EHL," said Mark Kumpel, the league's Director of Hockey Operations. "Neil [Ravin] and I often joke about how the five-month offseason typically feels slower in comparison the seven-month hockey season. Each year flies by, and as this upcoming season follows the same pattern, were looking forward to what should be a milestone year. We are nearing in on commitment #700 for the EHL, and our hope is to be saying that same thing about #800 by next Spring."

The EHL seeks to provide the Direct Path to College Hockey, and that starts with all teams completing a 50-game regular season schedule. This weekend marks the first couple days in a long journey that will end at the 2018 EHL Frozen Finals. This year's Championship will feature a three-day round robin between the final four teams, and then the title game on the 4th and final day.

The location for the 2018 EHL Frozen Finals (March 22nd through 25th) will be announced soon, and in the meantime make sure to follow the league on social media for all the latest news and updates. You can also watch the #Eshow action all season long on HockeyTV. 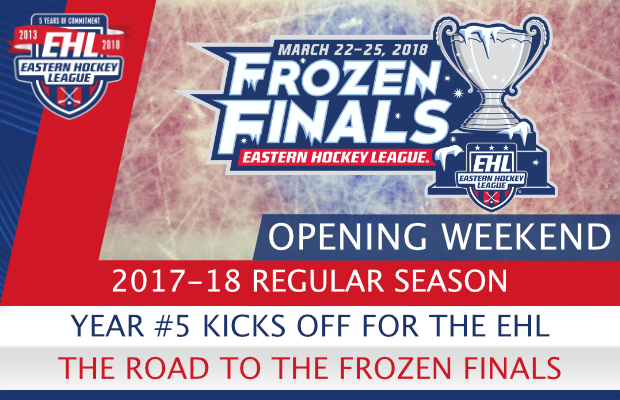