TSR Hockey Stars of the Month

BOSTON, MA -- We can officially close the books on 2018 in the Eastern Hockey League (EHL). The final month of the calendar year featured a number of great matchups and performances across the league, along with a top-notch showcase in Newington, CT. We're now ready for the home stretch of the regular season, and when the EHL resumes play in January, the push for the playoffs will begin.

The Stars of the Month will all receive a $20 TSR Hockey gift certificate.

Scroll down to read about each player's set of December performances, and remember to catch the #Eshow action all year long on HockeyTV.

Vonakis and the Little Flyers went 6-1-0 in the month of December, and averaged a phenomenal 5.43 goals per game. The '99 native of Abingdon, MD was a key cog behind Philadelphia's big offensive month, scoring seven goals and dishing out 14 assists. Dating back to November 1st, Vonakis is the top scorer in the EHL, tallying 35 points to his name during that stretch (14 games). 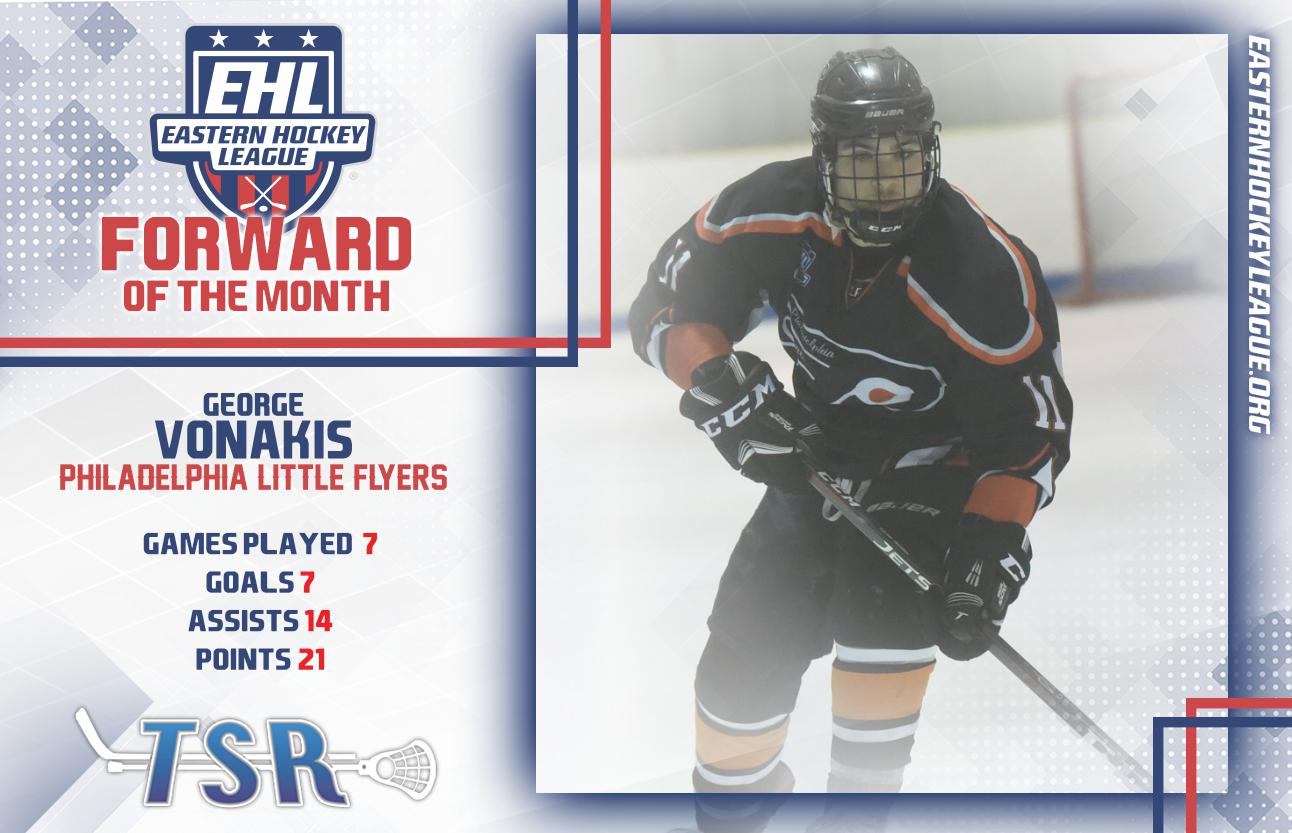 Moving back to the blue line, and the Little Flyers leading scorer so far this season has actually been a defenseman. The '98 veteran from the Czech Republic posted 16 more points in December, giving him 46 to date in his final season of junior hockey. Mroz has shown a nice balance between scoring and playmaking, with 14 goals and 32 assists. The 6'3 defenseman plays a physical game in the defensive end, and to no surprise, jumps up in the rush on a consistent basis.

Looking ahead to the final two months, Mroz has a 12-point lead over his teammate Nick Daluisio for the most points by a defenseman in the EHL. Along with his future NCAA Commitment, Mroz is a top candidate to win the 2018-19 Defenseman of the Year award, and the Little Flyers look like one of the favorites to return to the EHL Frozen Finals. 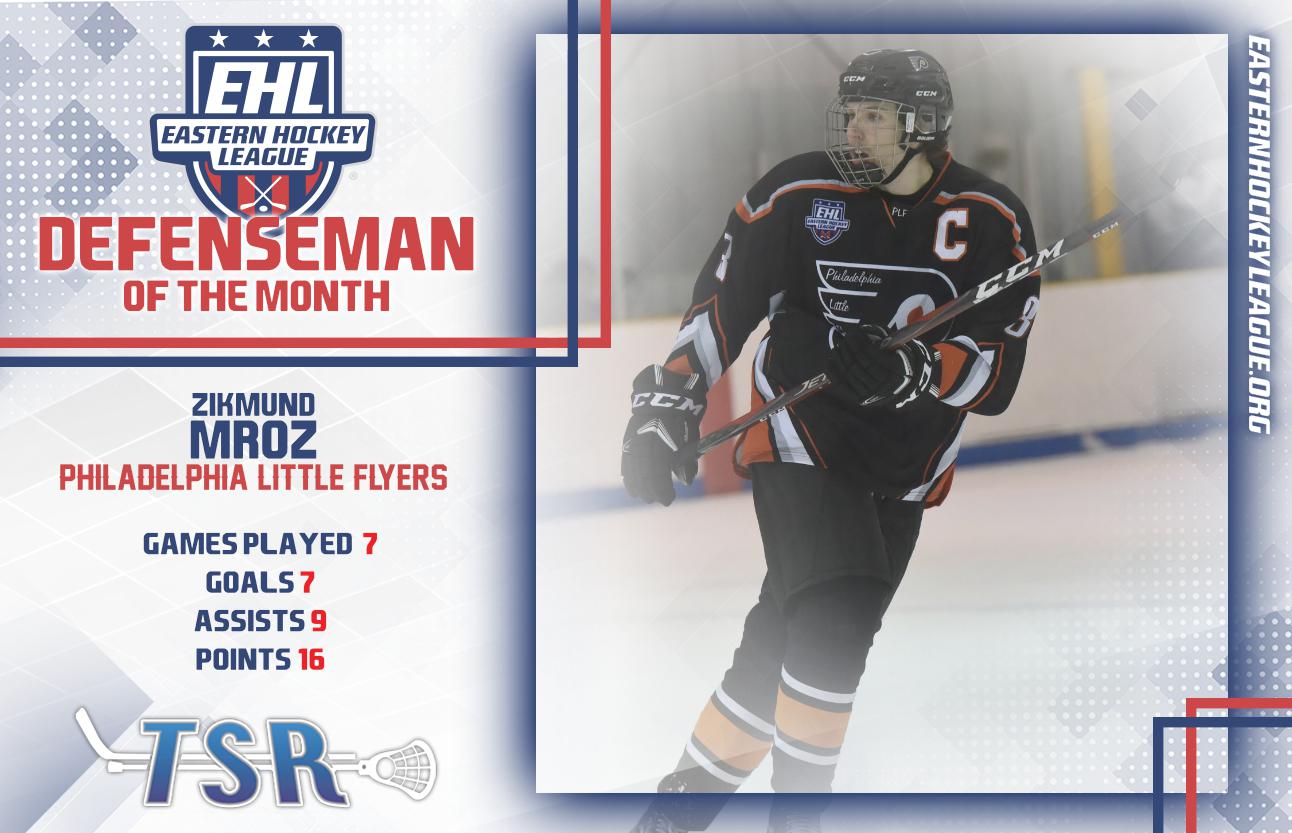 We wrap things up between the pipes with the anchor behind the Seahawks Hockey Club. Paxson started in three games, and entered the fourth game in relief during the month of December. Overall, the '98 native of Eagle River, AK posted a 3-1-0 record to go along with a 2.02 GAA and .924 save percentage. The fantastic finish to the 2018 calendar year helped lower Paxson's GAA down to 1.66 for the season.

When the Seahawks return in January, their 17-8-4 record will have them in control of 1st place in their division and the 2nd place overall in the New England Conference. The Seahawks will look to Paxson help maintain their spot in the standings, and secure a First Round bye in the EHL Playoffs. The Seahawks remaining schedule features 17 more games, 12 of which come against conference opponents. 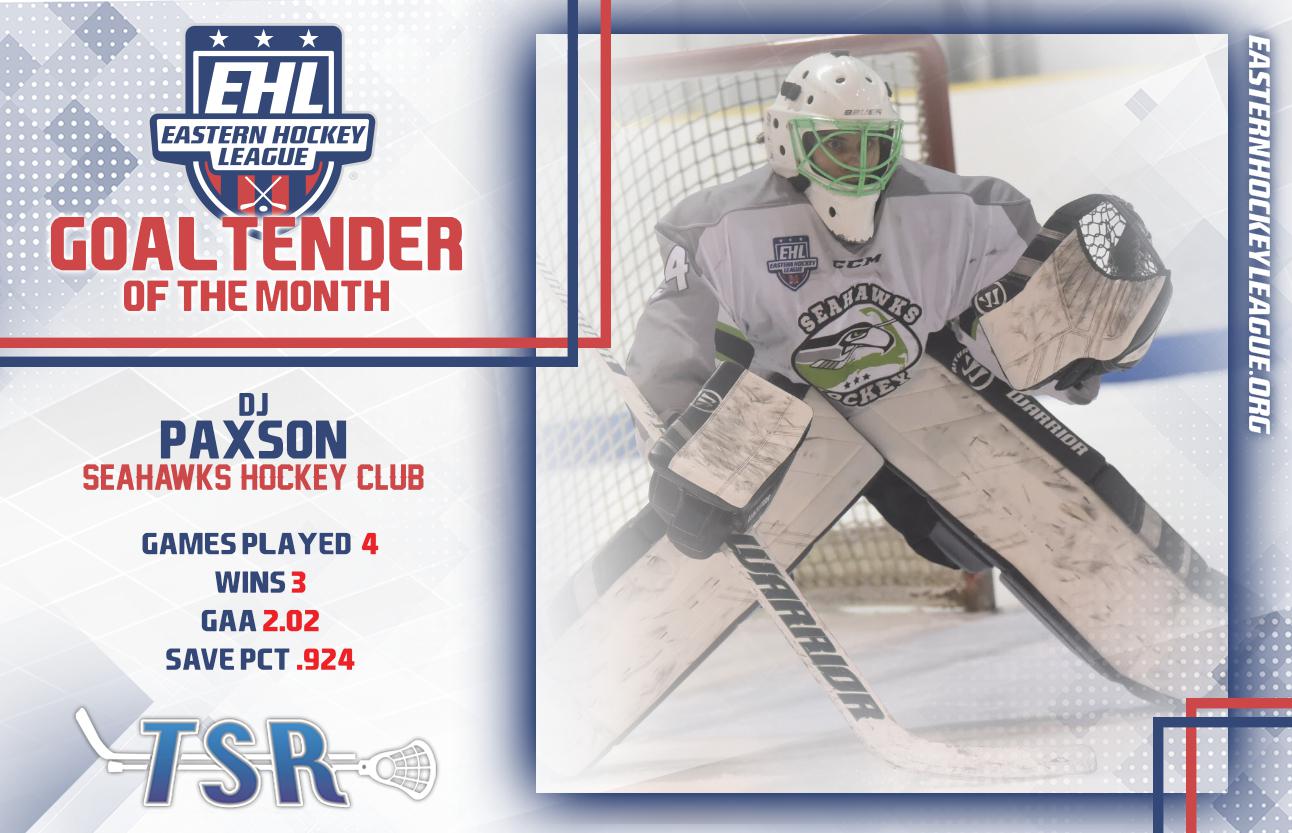