ASTON, PA -- Zikmund Mroz, a defenseman for the Philadelphia Little Flyers, has committed to Lebanon Valley College (LVC) for the fall of 2019.

The '98 native of Praque, Czech Republic is in his third season with the Little Flyers, and to date, he's tallied 130 points in 137 career games in the Eastern Hockey League (EHL).

"Mike [Narrigan] and I are proud of Zeke, he’s our only third year player and his role has been elevated from years past," said Little Flyers head coach and general manager Mark Catron. "He’s a leader on this team, as a Co-Captain with Nick [Daluisio], and he has really taken his offensive game to a higher level; it started early on this season and he hasn’t stopped. He’s a defenseman that is the #2 scorer in the league right now, which is pretty amazing. Zeke’s game this year has really kept our group rolling forward. We are happy with his development and know he is going to make an impact at Lebanon Valley."

As Catron mentioned, Mroz is ranked #2 on the league scoring charts, and he's already shattered the points record for a defenseman in a single season. Mroz got off to a hot start this year, and never looked back. The veteran defenseman was a member of this season's EHL All-Star team that made the three days in October a weekend to remember for the league. Overall Mroz is beyond grateful for the time he spent in the EHL.

"First I would like to thank my parents for everything they have done for me, giving me this great opportunity to play junior hockey and move on to college," said Mroz. "I am very grateful for their support and encouragement throughout the years. Thank you to Coach Catron, Coach Narrigan, and Mr. Giacobbo, for everything they have done for me over the past three seasons, without them I would not be able to move to the next level and achieve my goals.  It has been an amazing experience the past few years with the Little Flyers; I wouldn’t change anything about it. Thank you to the Brown family, for always making me feel at home and welcomed, they have been great to me and made my experience one I will never forget. I’d like to thank all of my teammates and everyone in the Little Flyers organization for making my junior hockey career very memorable; I had a blast all the way. Finally, thank you to Coach Parsons and Lebanon Valley for giving me this great opportunity. This year has been going beyond my expectations for me and my teammates. I am excited to begin a new chapter in my life and move on to college, and these past three years have been great, but there is no better way to finish my junior hockey career than by winning the championship!”

With his NCAA Commitment now official, Mroz will turn his full attention towards the upcoming EHL playoffs. The Little Flyers recently clinched the 2018-19 Regular Season Championship, and now they are looking to become the first team in #Eshow History to win both the regular season and playoff titles in the same year. 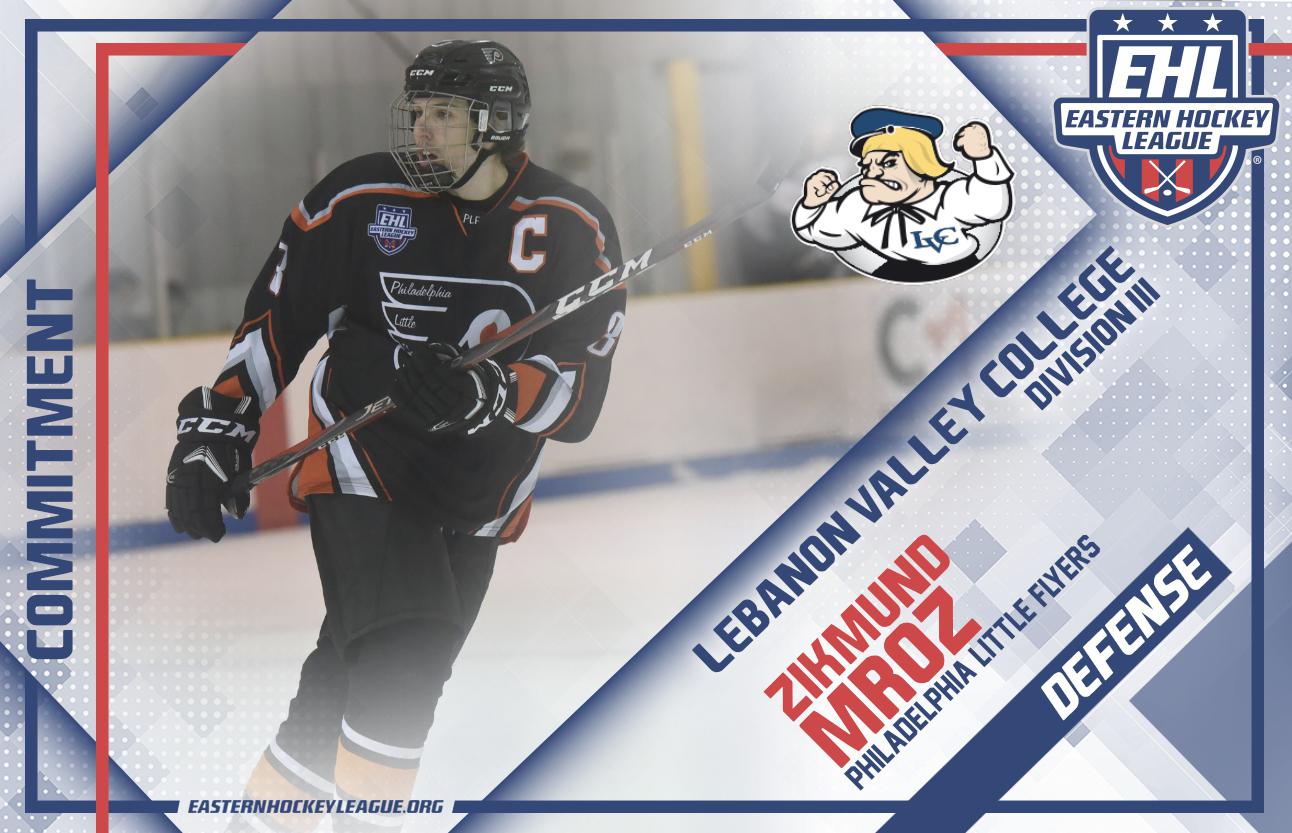