BOSTON, MA -- It's time for the 2019 Playoffs in the Eastern Hockey League (EHL). The countdown to Providence is on, as in just two weeks, the Frozen Finals will begin at Schneider Arena. The New Hampshire Avalanche are contenders again this season, after their ending their first year with their first title.

Can they be the first team to go back-to-back in #Eshow History?

We will find out in the next couple weeks. Be sure to scroll down to view the full schedule for the First Round of EHL Playoffs.

With the division winners enjoying First Round byes, seed #3 will face-off with seed #6, and seed #4 will take on seed #5 in each respective conference.

Both of these matchups have the potential to go the distance, as each series should be tightly contested. Looking at the Lumberjacks-RoughRiders series first, and all three games will take place in Burlington, VT. Vermont won both regular season games, by scores of 5-2 and 6-3. The Lumberjacks were an excellent home team this season, as they finished the year with a record of 16-2-1 in games played at Leddy Arena.

Each team has a number of players to watch in this series, including two individuals who have been nominated for the Defenseman of the Year Award. Cory Doney is the top guy on the blue line for the Lumberjacks, and Connor Boyce is the leader on the back end for Connecticut.

As for the other series taking place up in New England, the Rangers will host Games #1 and #3 (if necessary), while the Seahawks will be at home for Game #2. In the regular season, the Seahawks won the first matchup by the score of 1-0, but the Rangers took the season series with wins of 3-1 and 3-2. While the Lumberjacks-RoughRiders series showcases a pair of top defensemen, the Seahawks-Rangers showdown features some high-end talent between the pipes.

The Rangers will bring out a pair of anchors in Billy Girard and Aiden Curry, while the Seahawks will showcase DJ Paxson, who has been nominated for this year's Goalie of the Year Award.

As we work our way south, we have a pair of divisional matchups in the First Round. Looking at the Knights-Applecore series first, and these two rivals faced-off seven times during the regular season. The Knights controlled the regular season series by going 5-0-2 in those seven contests, but keep in mind, New York won last year's First Round playoff matchup with Wilkes-Barre/Scranton. That series went the distance to a decisive 3rd in final game, with the Applecore skating away victorious in overtime.

Anthony Starzi (Knights) and Ryan Lieth (Applecore) are just a couple players to watch in this series between two teams that have played 14 games against each other, dating back to September of 2017.

Tyler Roy was stellar between the pipes that afternoon for the Jr. Flyers, as his 31 saves helped pave the way for his team. Roy will have to play a similar role in this series, in order to shutdown a lineup that contains top scorers such as Samir Abouelhana, Justin Meers, and Jake Russo, just to name a few. 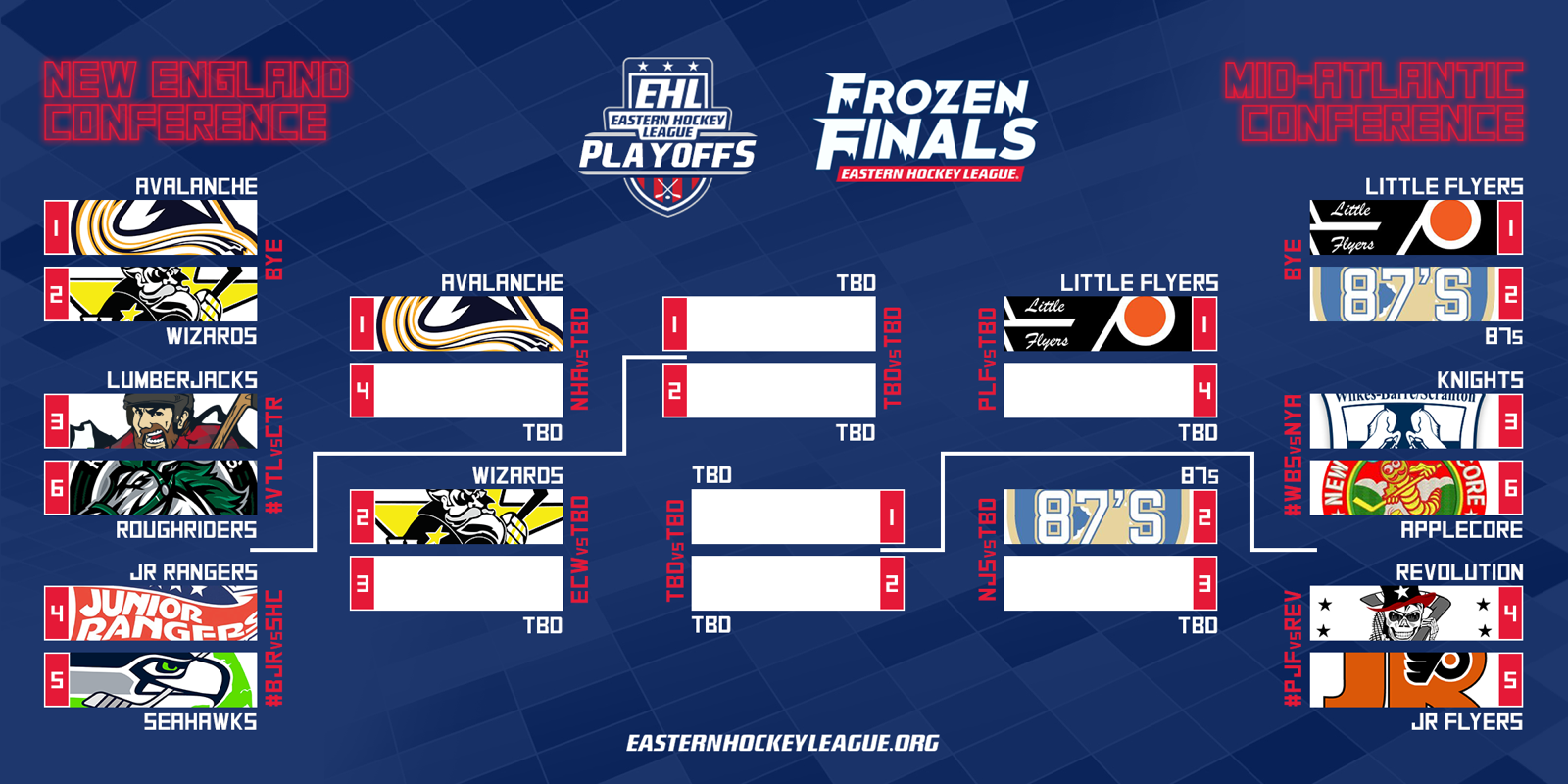