Warrior Hockey Stars of the Week #19

Below you'll find the 19th set of Warrior Hockey Stars of the Week from the past seven days in the EHL and EHLP.

The EHL is pleased to announce that Matthew Bielinski (New Jersey 87s), Alex Dalton (Valley Jr. Warriors) and Rian Stewart (Connecticut RoughRiders) have been named the Warrior Hockey Stars of the Week.

Bielinski and the 87's continue to set the pace in the Mid-Atlantic Conference, following a pair of wins over Team Maryland and the New York Apple Core this past week. The two victories stretched the winning streak out to four, and makes New Jersey 10-0-1 in their last 11 games.

As for the 2000-born native of Getzville, NY, Bielinski turned in his best weekend of the season, which started with a hat-trick plus an assist against Maryland. Bielinski then followed up the four-point performance with a goal and an assist against the Apple Core. New Jersey takes on New York again on Wednesday, followed by games against the Philadelphia Revolution on Saturday and the Philadelphia Little Flyers on Sunday.

Dalton and the Warriors posted a 1-1-0 record this past week, knocking off the Seacoast Spartans and then falling to the Boston Jr. Rangers. The '99 native of Andover, MA began the year as a forward, but moved back to the blue line when the calendar turned over to 2020.

Despite manning the back end, the veteran helped lead his team to the victory over the Spartans, scoring both goals in a 2-1 victory.

Although the team couldn’t come out victorious against the Rangers, Dalton was still able to assist on one of the two Warrior goals. Action resumes this upcoming Wednesday for Dalton and Warriors, as they host the Railers Jr Hockey Club and then stay home to take on the East Coast Wizards on Sunday.

Stewart and the RoughRiders completed a weekend sweep of the Little Flyers, with the ’99 netminder turning in back-to-back solid performances. The EHL veteran was faced with a total of 76 shots, and allowed seven goals over the course of the two-game series. Included in nearly 70 saves were a number of highlight-reel blocks, that helped his team maintain their lead.

With these two huge victories, Stewart’s season record improves up to 7-4-1 for the year, and the team remains in 2nd place in the Mid-Atlantic Conference with 54 points. If the RoughRiders can remain in 2nd place, they would earn themselves a First Round bye in the upcoming EHL Playoffs. However, the biggest challenger to that position is the team that Connecticut takes on Wednesday, Philadelphia Revolution. The RoughRiders currently own a four-point advantage over the Revolution, but Philadelphia has two games in hand on the conference opponent.

The EHLP is pleased to announce that Thomas Swartwout (New Jersey 87s), Ryland Strauss (New Hampshire Avalanche) and Skyler Coard (New England Wolves) have been named the Warrior Hockey Stars of the Week.

Swartwout and the 87’s had a quiet week with only one contest, but the game certainly did not disappoint, in a battle against the 3rd-place Philadelphia Revolution. In the 8-6 win for the 87’s, the ’01 native of Brick, NJ played a role in six of the eight goals his team scored. The EHLP veteran forward was able to net two goals, and rack up a phenomenal four assists in the game. With these two points, the 87’s continue to sit in 2nd place in the Mid-Atlantic Conference, just a single point behind the Philadelphia Little Flyers. However, it's important to note that the 87's have three games in hand over the Little Flyers. Coming up this week, the 87s take on the Revolution again on Saturday, before facing off in a huge game against the Little Flyers on Sunday.

Strauss and the Avalanche were able to secure four huge points of their own this past week, with back-to-back 5-2 victories over the Walpole Express and the Connecticut Chiefs. Despite being the youngest member of the Avalanche squad, the ‘02 assistant captain leads the defensive core in scoring with 23 points in 32 games. Over the course of the weekend the native of Alberta, Canada tallied one assist against the Express, before netting a goal and notching another assist against the Chiefs. The Avalanche hope to stay in the win column as they are set to host the Express and Valley Jr. Warriors on Saturday and Sunday this upcoming weekend.

Coard and the Wolves continue to be the hottest team in the EHLP as they extended their win streak out to 11 games, with a weekend sweep over the Vermont Lumberjacks. The 2000-born netminder from Morrisville, NC stood strong in between the pipes during game #2 of the series, as the Wolves defeated the 'Jacks by a final score of 3-1. Over the course of the 60 minutes, Coard was faced with 38 total shots, only allowing a single goal, bringing his season record up to 8-4-0 for the year. The Wolves now sit in 3rd place in the extremely tight New England Conference.

It's important to note that there are still four regular season matchups left between the Avalanche and the Wolves. 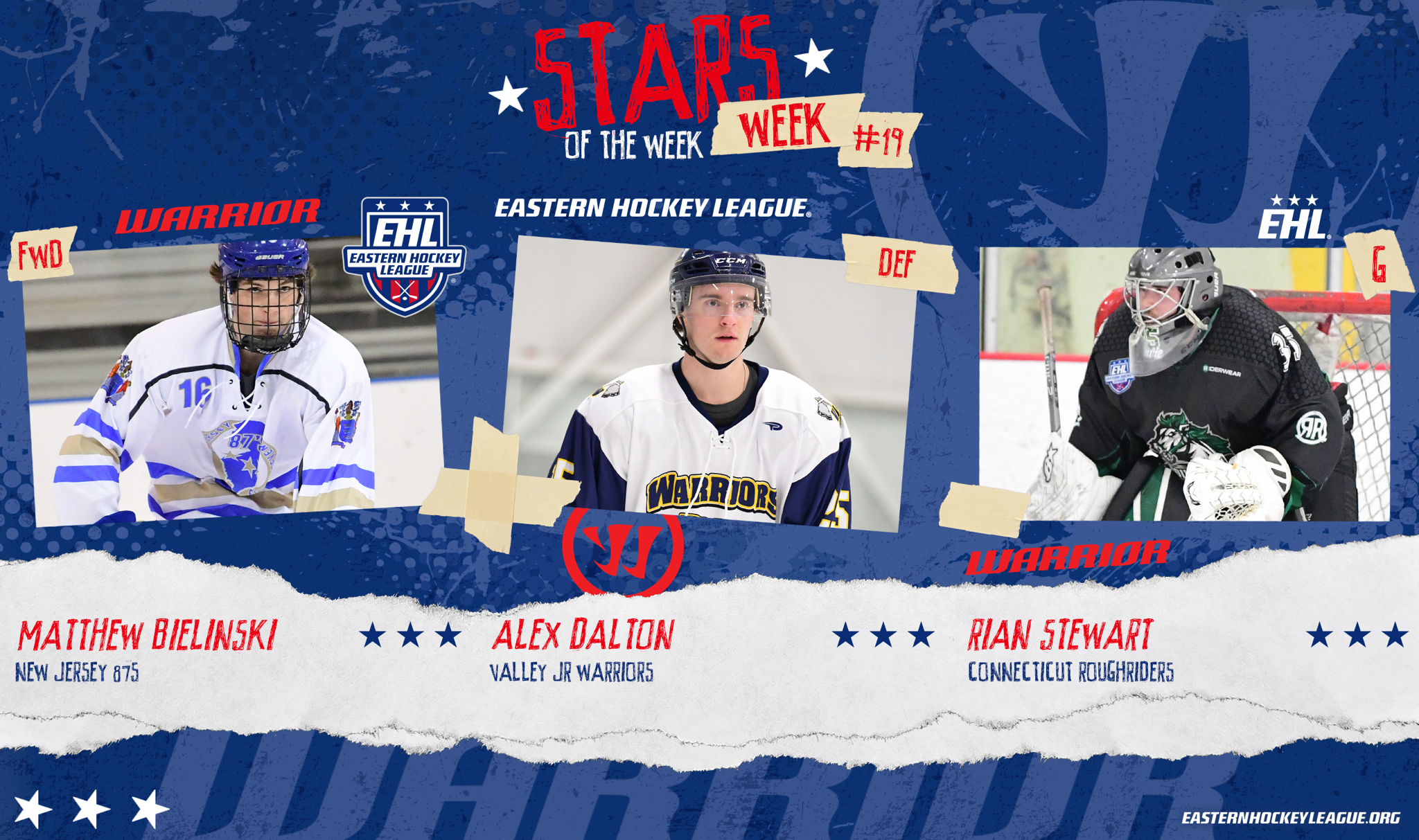 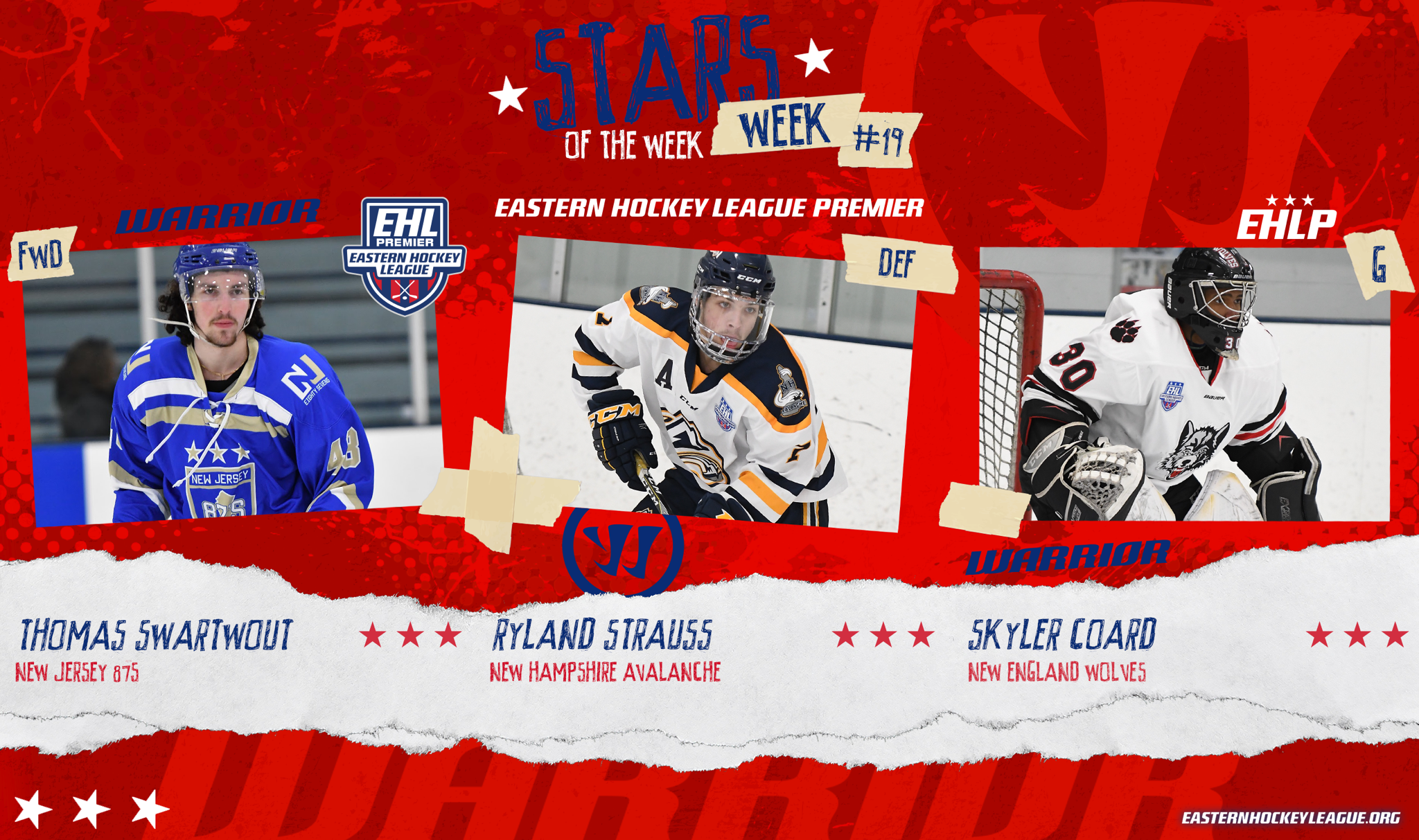