WALL TOWNSHIP, NJ -- Dylan Gutierrez, a defenseman for the New Jersey 87's, has committed to Lebanon Valley College (LVC) for the fall of 2021.

The 2000-born native of Santa Ana, CA is in his 2nd season with the 87's organization, and through 44 career games in the Eastern Hockey League (EHL), Gutierrez has tallied 28 total points. To date this year, Gutierrez is playing his best hockey of his junior career, with 18 points in 20 games.

"Dylan had all the tools to be successful when he first got here," said 87's head coach and general manager Adam Houli. "It was just a matter of getting comfortable at the junior game with the pace and speed. When he got here it was an adjustment, he worked hard in the offseason, came back and he looked really good from day one. He was focused, he was ready to go and that's why the season has gone the way it's gone with him earning a commitment right before the holiday break."

As Houli mentioned, it took Gutierrez a little bit of time during the 2019-20 season to adjust to league. In total, Gutierrez played 24 games in the EHL last season, along with six games in the Eastern Hockey League Premier (EHLP). The 6'1" defenseman trusted the process throughout, and is currently tied for 2nd on the EHL defensive scoring charts. The point production combined with his play in the defensive zone helped Gutierrez earn EHL All-Star recognition back in November.

"It takes a lot of stress off my shoulders, it was a hard process to look at schools, pick one and narrow it down. But I'm glad it was LVC and I look forward to going there," said Gutierrez. "When I came into the 87's organization, Matty [Kiernan] and [Adam] Houli definitely wanted to shape me into the 87 way. I knew I had to go down and play some Premier games to really get in that mold, and then it was a lot of growth from there, and trust from the coaches to get me where I am now."

Gutierrez is a big reason why the 87's sit at the top of the Mid-Atlantic Conference standings with a record of 18-1-2 through their first 21 games. 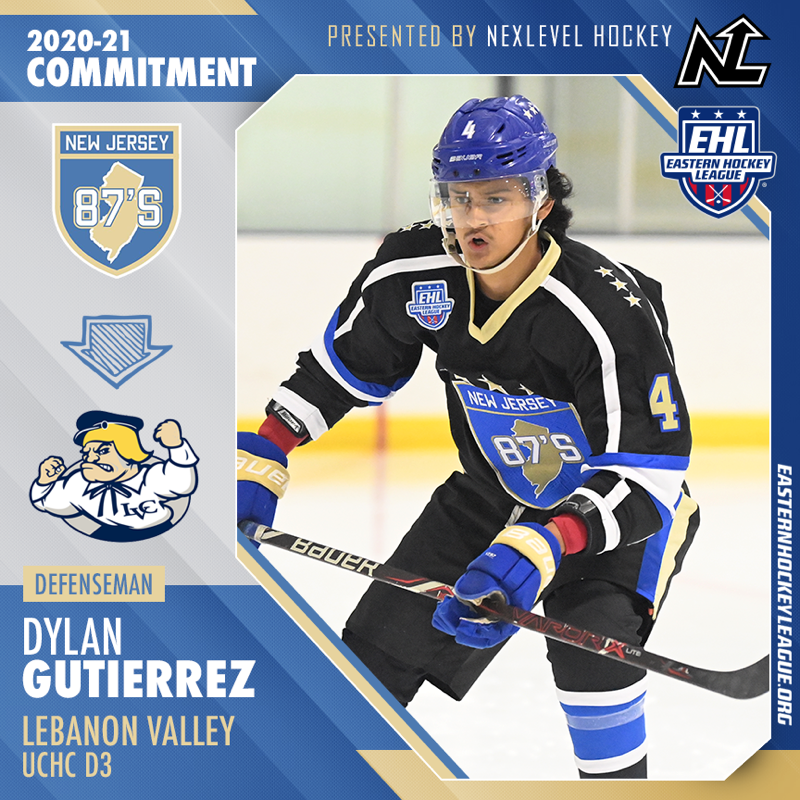