SOUTH DENNIS, MA -- Vincent DeSanctis, a forward for the Seahawks Hockey Club, has committed to the Wentworth Institute of Technology for the fall of 2021.

The 2000-born native of Howard Beach, NY joined the Seahawks in early November, and has proven to be a very welcomed addition to the team's lineup. In his first 14 games with the club, DeSanctis has averaged just under a point per game with a pair of goals and 12 assists to his credit so far.

"Vinny has been great for us since the day he arrived," said Seahawks head coach and general manager Bill Zaniboni. "He has helped provide a spark when need it on offense, and we are excited to be a stepping stone for him as he prepares to grow as a player and person moving toward his future as a student-athlete."

While DeSanctis had not previously played in the EHL prior to joining the Seahawks, he had however previously played against the EHL back in December of 2018. That winter, the EHL welcomed the Kirkland Lake Gold Miners of the Northern Ontario Junior Hockey League (NOJHL) to the December Showcase in Newington, CT. DeSanctis and the Gold Miners faced-off against the East Coast Wizards and the Walpole Express as a 'Guest Team' at the league-wide event.

It's crazy how things can come full circle, as DeSanctis is grateful that his journey brought him officially into the EHL, which has led to this commitment.

"I am very proud and excited to announce my commitment to the Wentworth Institute of Technology," said DeSanctis. "I would like to thank my family and everyone along the way who has supported me to get to this point in my career. I also would like to thank the entire coaching staff and the Seahawks Organization for their outstanding support throughout this whole process. I'm excited to be a Leopard for the next 4 years." 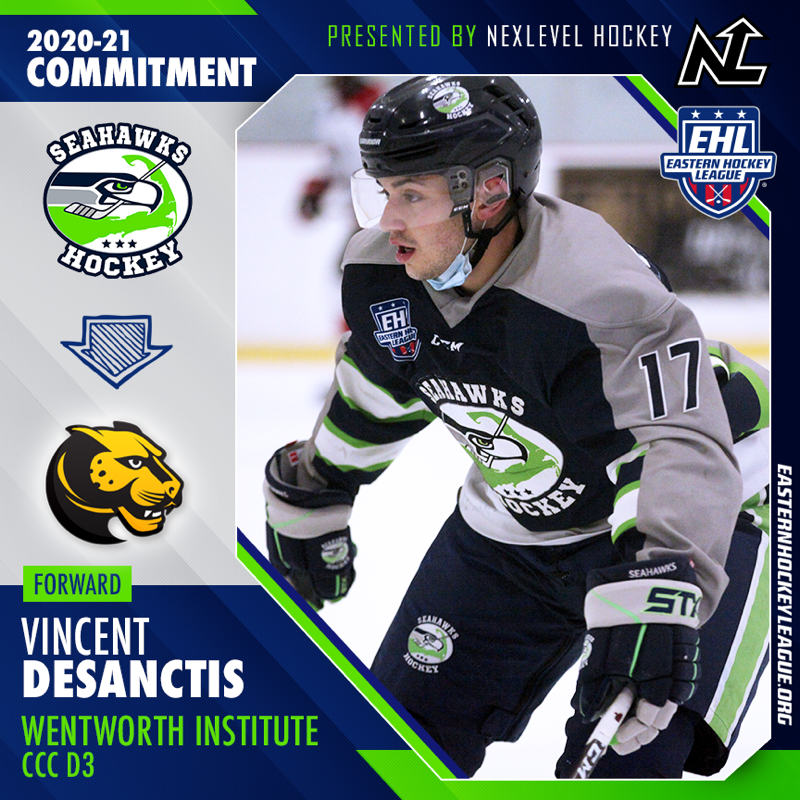