Starting things off in the EHL, the New Jersey 87s are back at the top following a three-win week. New Jersey shutout the Connecticut RoughRiders by scores of 6-0 on Wednesday and 5-0 on Friday, and then knocked off the Protec Jr Ducks by a final score of 5-2 last night. Overall, the 87's have now won eight straight games dating back to December 8th. New Jersey owns the best record in the league at 23-1-2.

At #2, the Boston Jr Rangers lost their first game since November, when they dropped a 3-2 contest to the Western Mass Chiefs this past Monday. Boston quickly followed up their 2nd regulation loss of the season with a two-game sweep of the Seahawks Hockey Club on Thursday and Friday. Despite the minor setback at the beginning of last week, the Rangers still remain in control at the top of the Central Division standings with a record of 23-2-1.

At #3, the Walpole Express earned four out of a possible four points this past week, beating the Seahawks 4-1 on Wednesday, and then securing a victory over the Chiefs by the same score yesterday. Just like the Rangers, the Express have only suffered a single defeat so far in the 2nd half, and that loss came at the hands of the Chiefs. At 20-8-1, Walpole has their eyes set on remaining 4th overall in the league standings, which would provide them with a solid chance to earn the at-large bid to the EHL Frozen Finals.

Falling back a spot to #4, the New Hampshire Avalanche won two of their three games against the Lumberjacks Hockey Club this past week. It appeared like New Hampshire may lose two in a row when they trailed against the Lumberjacks in the 2nd game of a home-and-home series on Friday, but a strong 3rd period comeback led to a split of the two-game set. At 21-4-1, the Avalanche control their own destiny towards locking up the #1 seed in the North Division.

Staying in the North, the Seacoast Spartans picked up another win this past week, stretching their winning streak out to six games and improving their overall record up to 13-13-3. The Spartans are easily one of the hottest teams in the EHL right now, having not lost a single game in 2021.

Moving down to the EHLP, we had appeared to be prime for some changes until a late upset reset things last night.

The top-ranked New Hampshire Avalanche were a team that seemed like they had a chance to move back, as they endured a pair of close calls this past week. New Hampshire picked up a one-goal victory over the Lumberjacks Hockey Club on Wednesday and then knocked off their rival by a 4-1 margin on Friday. Sunday however, brought them their toughest test as they narrowly squeaked out a 6-5 victory in overtime against the New England Wolves. The Avalanche own a near-perfect record of 18-1-0.

At #2 the New Jersey 87s offense stayed hot this past weekend, scoring a total of 13 goals and beating the New Jersey Renegades and Philadelphia Little Flyers by finals of 8-4 and 5-1 respectively. At 18-3-2, New Jersey is in complete control of the South Division as they push to lock up the Regular Season Division title and First Round bye in the upcoming playoffs.

At #3, the Railers Jr Hockey Club seemed poised to fall back a spot, after dropping a 6-0 contest at the hands of the #4 Boston Jr Rangers. However, the Valley Jr Warriors 7-3 victory over the Rangers last night, kept things locked into place from the top to the bottom of the EHLP Power Rankings.

The Rangers have the best record in the Central Division with a mark of 20-3-4, while the Railers sit right behind them at 15-8-0, and with four games in hand. 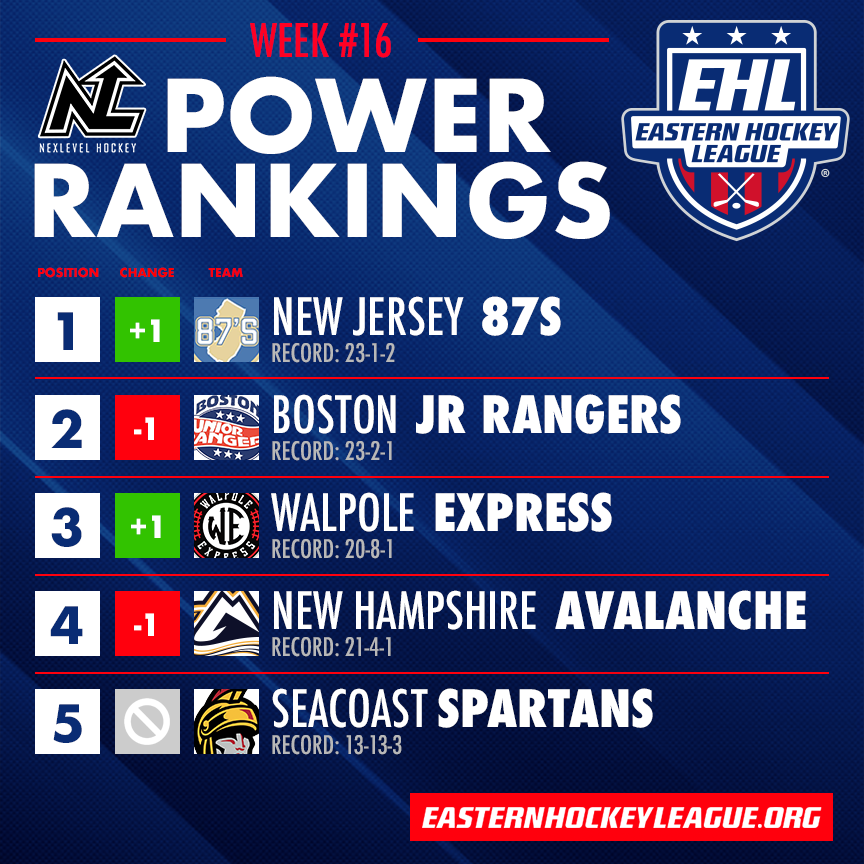 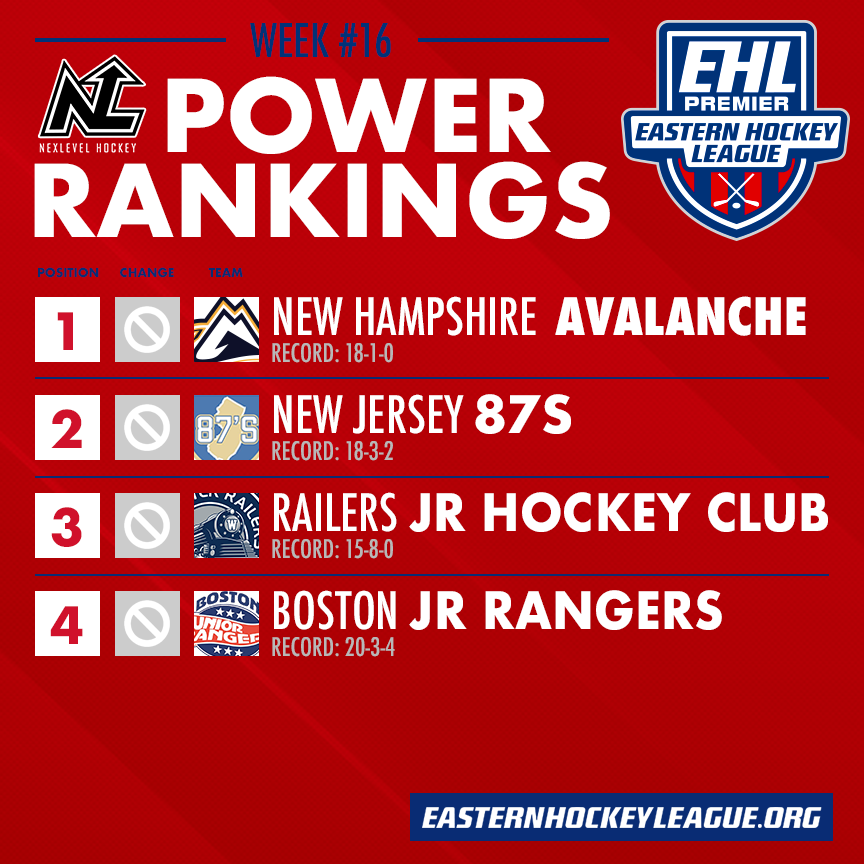