Spartans Move Back Inside the Top-Five

Starting in the EHL, the top-ranked New Jersey 87's continue to roll through the 2nd half of the 2020-21 season. As a new week begins, New Jersey has won 12 straight games dating back to their only regulation loss of the season on December 4th. Last year's 87's team was stout offensively, finishing the year with 234 goals scored.

As for this year's team, they have simply picked up right where last year's group left off, leading the league with 157 goals for to date. Coming up this week, the Regular Season Champions of the South Division play host to both the Protec Jr Ducks and Team Maryland.

At #2, the Walpole Express schedule went through a few changes this past week, as they will now return back to action on Wednesday when they head to Springfield, MA to take on the Western Mass Chiefs. It will be back-to-back road games for the Express when they then head up to Bedford, MA for a matchup with the East Coast Wizards on Thursday. Finally, the week will then wrap-up with a huge home matchup against the #3 Boston Jr Rangers on Sunday.

As for the Rangers, after losing to the Valley Jr Warriors on January 31st and dropping a spot in the rankings, Boston bounced back this past week with victories over the Railers Jr Hockey Club and the Seahawks Hockey Club.

Just like Walpole, the Rangers first game of the week will take place against the Chiefs, when they host their Central Division foe on Saturday afternoon. Following that game, as mentioned above, the Rangers are set for a big matchup with the Express that could ultimately clinch the division's #1 seed for the defending Regular Season Champions.

Moving down to #4, the New Hampshire Avalanche endured another up-and-down week. After sweeping a home-and-home series with the Lumberjacks Hockey Club on Wednesday and Thursday, the New England Wolves handed the Avalanche their 4th loss of the 2nd half on Sunday. While the loss only pushed New Hampshire's record to 6-4-0 in the 2nd half, the slightly above .500 mark is still below the standards that have been set by the two-time EHL Champions.

Coming up this week the Avalanche will look for revenge against the Wolves on Thursday, before facing off with the #5 Seacoast Spartans and the Lumberjacks in Granite Cup on Sunday and Monday.

Speaking of the Spartans, just when their hot start to the 2nd half had started to cool off, Seacoast picked up back-to-back overtime victories this past week. The first victory came at home on Thursday, when they knocked off the Wolves in a 4-3 thriller.

However, it was the 2nd overtime victory that really turned heads, as the Spartans won a WILD 6-5 contest over the Lumberjacks on Saturday in Waterville Valley, NH.

Shifting down to the EHLP, and it was another week of no changes at the top of the rankings.

At #1, the New Hampshire Avalanche keep chugging along, collecting their 10th straight victory this past Saturday. The Avalanche controlled their matchup with the New England Wolves from start to finish, en route to a 6-0 victory. At 22-1-0, the Avalanche appear to be in complete control of clinching both the North Division title and the overall Regular Season Championship.

At #2, the New Jersey 87s had their only game cancelled this past weekend, due to the snowstorm that worked its way up the east coast. Just like the Avalanche, the 87's continue to inch their way closer and closer towards locking up the South Division title. They will look to take another step towards doing so when they travel to take on the Philadelphia Little Flyers on Sunday morning.

Right behind New Jersey, the #3 Boston Jr Rangers did hit the ice for a game this past weekend, knocking off the Valley Jr Warriors by the score of 3-1 on Friday night. The win was the Rangers' 2nd straight victory over the Warriors, since Valley knocked them off back on January 31st. Keeping with the trend, the defending Regular Season Champions are also working their way towards locking up the top seed in the Central Division.

Wrapping things up once again at #4, the Railers Jr Hockey Club won all three of their games this past weekend, knocking off the Western Mass Chiefs by the score of 3-1 on both Friday and Sunday, with an 8-0 shutout of the Warriors sandwiched in between (Saturday).

While it appears like we are on a crash course towards Rangers-Railers final in the Central, we will get another preview of that potential playoff matchup on this Sunday, Valentine's Day. 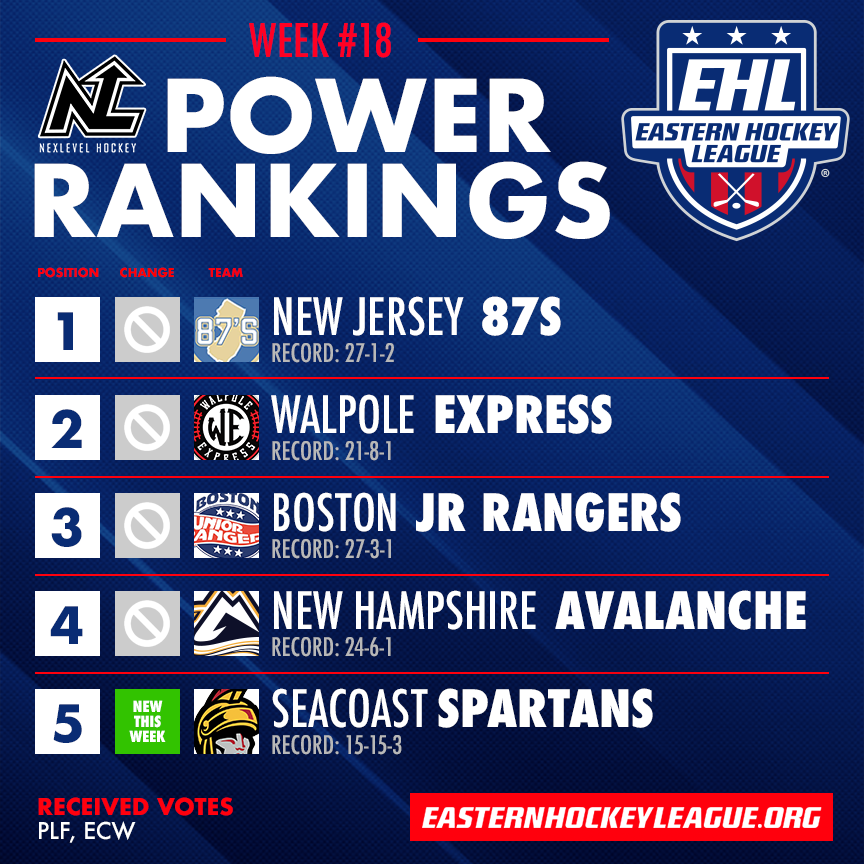 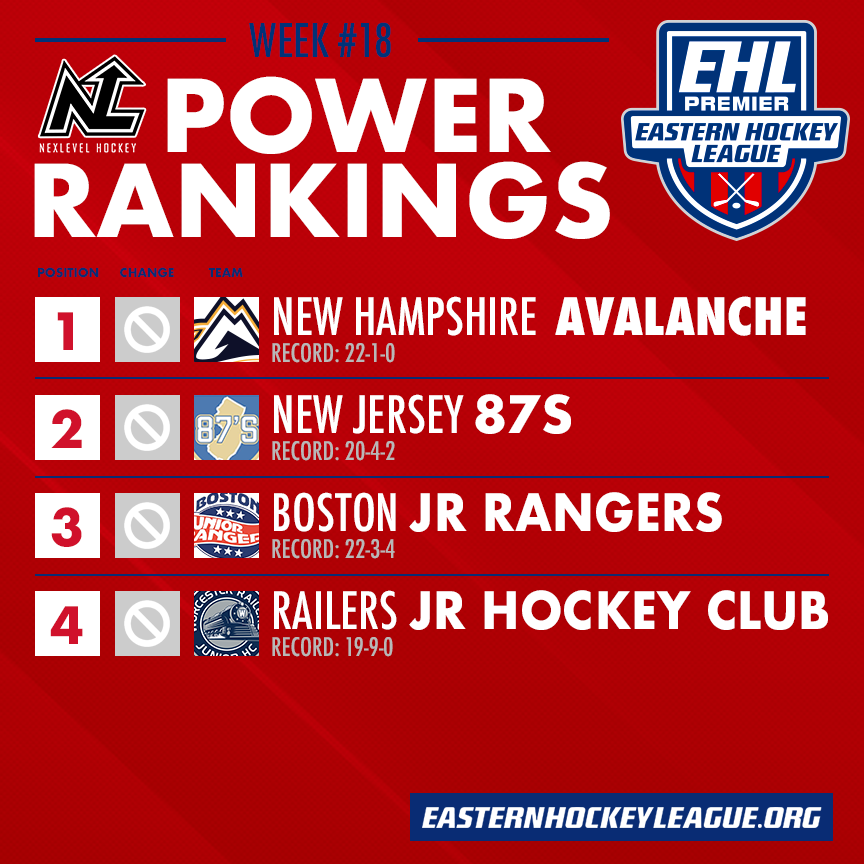